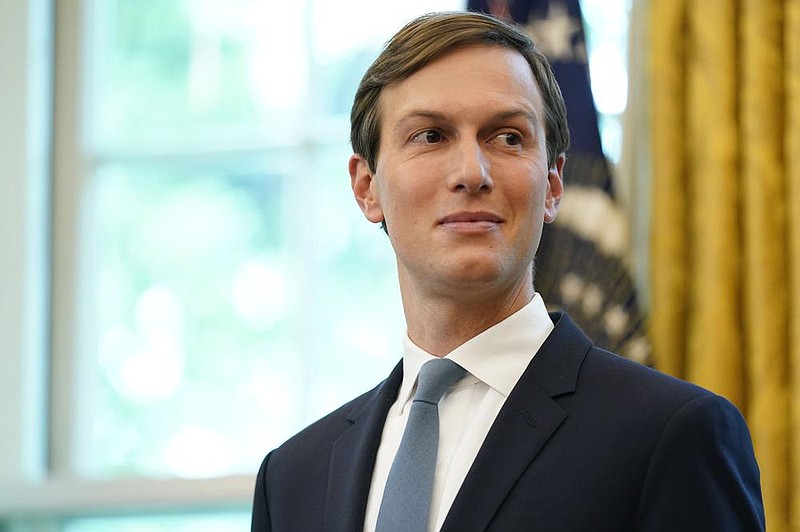 The move is part of the administration's diplomatic push to further ease Israel's relative isolation in the Middle East and find common ground with nations that share U.S. wariness of Iran.

Trump and the leaders of Bahrain and Israel spoke Friday, and issued a joint statement that the president tweeted.

"This is a historic breakthrough to further peace in the Middle East," said the statement from Israeli Prime Minister Benjamin Netanyahu, King Hamad bin Isa Al Khalifa of Bahrain and Trump.

"Opening direct dialogue and ties between these two dynamic societies and advanced economies will continue the positive transformation of the Middle East and increase stability, security and prosperity in the region."

Trump later celebrated the news in an Oval Office appearance.

[Video not showing up above? Click here to view » https://www.youtube.com/watch?v=TOqHKnPJLmQ]

"There's no more powerful response to the hatred that spawned 9/11 than the agreement that we're about to tell you," Trump said.

"... This is a truly historic day. There have been two peace agreements with Israel in the last 72 years. This is now the second peace agreement that we've announced in the last month, and I am very hopeful that there will be more to follow," Trump said.

The agreement is another diplomatic win for Trump less than two months before the presidential election and an opportunity to shore up support among pro-Israel evangelical Christians.

But it is a setback for Palestinian leaders, who have urged Arab nations to withhold recognition until they have secured an independent state. The Palestinians have seen a steady erosion in once-unified Arab support -- one of the few cards they still held as leverage against Israel -- since Trump began pursuing an unabashedly pro-Israel agenda.

Trump described "tremendous enthusiasm" among other Arab countries. He spoke to the leader of another small Persian Gulf state, Oman, earlier in the week.

All take cues from Saudi Arabia, the regional diplomatic heavyweight and religious lodestar, so the agreements are seen as having Riyadh's tacit blessing.

Bahrain considers Friday's announcement a first step toward fully normalized ties with Israel, a person close to the Bahraini royal family said. The person spoke on condition of anonymity because he was not authorized to address the matter on the record.

The U.S. announcement made no distinction between the terms "diplomatic relations" and "normalized relations."

Trump said Israel and Bahrain would exchange ambassadors and open embassies for the first time, and begin work on cooperation in health, technology, agricultural and other sectors. The agreement also provides for direct flights between Manama and Tel Aviv.

Israel and Bahrain are not at war, so their agreement is not a peace deal in the usual sense. Like most other Arab states, Bahrain had until now officially considered Israel to be an illegitimate usurper of Palestinian land and rights.

Egypt and Jordan were the only Arab states to have made formal peace with Israel before the UAE agreement in August.

As a practical matter, establishing full diplomatic relations means Bahrain is acknowledging Israel's legitimacy, but there were signs that the kingdom is cautious about how it presents the matter.

Bahrain is sending its foreign minister to the White House next week to attend a signing ceremony between Israel and the UAE, rather than the king or the country's powerful crown prince.

A statement from the official Bahrain News Agency focused on hopes for peace between Israel and the Palestinians.

"During the call, HM King Hamad stressed the need to reach a just and comprehensive peace as a strategic option, in accordance with the two-state solution and relevant resolutions of international legitimacy," the statement said, using the abbreviation for "his majesty."

"We have invested in peace for many years and now peace will invest in us," he said. "It will lead to very large investments in the Israeli economy."

Just off the coast of Saudi Arabia, the island of Bahrain is among the world's smallest countries, only about 290 square miles. But its location in the Persian Gulf has made it a trading stop and a naval defensive position.

Bahrain is acutely aware of threats posed by Iran, an anxiety that comes from Bahrain's majority Shiite population.

In recent years, Bahrain has cracked down on all dissent, imprisoned activists and hampered independent reporting. While the Obama administration halted the sale of F-16 fighter jets to Bahrain over human-rights concerns, the Trump administration dropped that.

Trump administration efforts have lately focused on establishing direct ties between Israel and its other neighbors in a bid both to give Israel greater security and to apply pressure on Palestinian leaders to open talks.

"I can see a lot of good things happening with respect to the Palestinians, which would be really wonderful, whether you were on their side or not on their side."

'STAB IN THE BACK'

Palestinian Authority President Mahmoud Abbas cut off contact with the Trump administration and renounced peace efforts after Trump's announcement in December 2017 that he would recognize Jerusalem as the capital of Israel and move the U.S. Embassy there.

Palestinians claim east Jerusalem as the capital of a future state, and previous U.S. administrations had declined to announce U.S. recognition that could prejudge negotiations between Israel and the Palestinians.

The Palestinian Authority condemned the announcement as a betrayal of "the Palestinian cause" and of previous commitments from Arab states.

"This step is a token of support for legitimizing the ugly crimes of the Israeli occupation against the Palestinian people, at a time when the occupying state is consolidating its takeover and annexation of the Palestinian land by military force," Palestinian leaders said in a statement.

"This is another stab in the back of the Palestinian cause, the Palestinian people and their rights," said Wasel Abu Yousef, a senior Palestinian official. "It is a betrayal of Jerusalem and the Palestinians ... We see absolutely no justification for this free normalization with Israel."

​​​​​Information for this article was contributed by Anne Gearan, Souad Mekhennet, Steve Hendrix and Kareem Fahim of The Washington Post; and by Matthew Lee, Deb Riechmann, Aya Batrawy, Ilan Ben Zion and Joseph Krauss of The Associated Press.