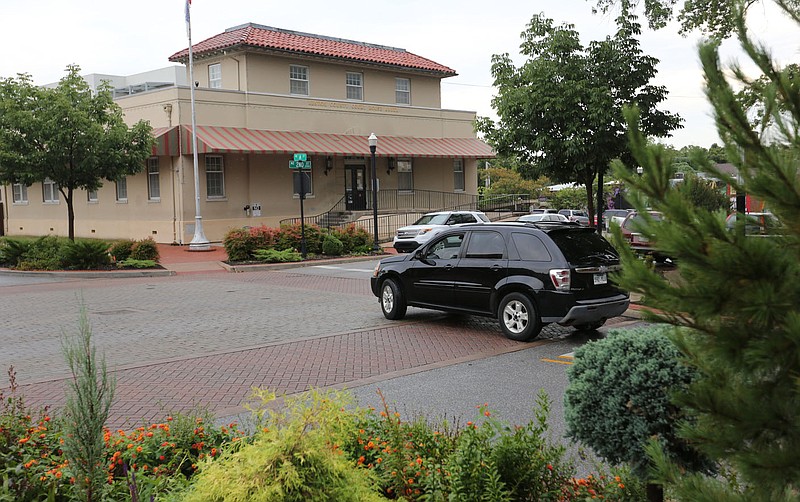 New awnings are visible Thursday, September 10, 2020, on the Benton County Court House Annex in downtown Bentonville. The work is part of the $3.1 million courthouse expansion. The county will spend $231,783 to repair the courthouse annex. Check out nwaonline.com/200914Daily/ and nwadg.com/photos for a photo gallery. (NWA Democrat-Gazette/David Gottschalk)

BENTONVILLE -- Benton County Judge Barry Moehring plans to update justices of the peace on the courthouse expansion at the Sept. 24 Quorum Court meeting.

"We should be able to give them a pretty good picture and go through the stages," Moehring said. The circuit judges, prosecutor and public defender staff also need to know where things stand, he said.

Justice of the Peace Susan Anglin looks forward to an update.

"If possible, I think it would be nice to see a picture of how the outside would look and more detail on changes to the entry and the security features," she said.

A new courtroom is needed for Christine Horwart, who was elected in March and will be the county's seventh circuit judge. She takes office Jan. 1. The Arkansas Legislature added the judgeship to assist with the increasing caseload.

The expansion would add 5,500 square feet to the downtown courthouse. The county plans to demolish the one-story section behind the courthouse that housed the coroner's office. A two-story addition is planned on the site with a lobby area and restrooms on the first floor. Horwart's courtroom and office area would be on the second floor.

"I like the proposed courthouse expansion in terms of meeting the needs of Division 7, now and in the future," Horwart said. "It will allow D7 to handle bench and jury trials with no limitation of space or resources."

The county will finance $3.1 million to expand the courthouse. The county secured the loan from Regions Bank for five years at 1.59% with no prepayment penalty, said Brenda Guenther, county comptroller. The court approved the financing plan in July.

Included in the court expansion cost is $231,783 to repair the annex where Circuit Judge Brad Karren holds court, according to documents. The annex is across the street from the main courthouse.

Those two areas are where lines form outside as people wait for their cases to be called. The other two sides will be done in the coming weeks, Beeson said.

A sidewalk will be added under the awning on the west side that should stop water from seeping into the annex basement, Moehring said. That work will be done in the coming weeks, Beeson said. The building exterior also will be painted, Moehring said.

"This court is grateful to Judge Barry Moehring and construction manager Bryan Beeson for the outside awnings erected on the courthouse annex," Karren said. "During the covid-19 pandemic, this court is not conducting in-person hearings. This requires many of our citizens to wait outside in the weather to appear in our foyer by video conference. With fall and winter weather quickly approaching, the awnings will provide much-needed protection from the elements."

The plan is to have the whole expansion wrapped up by the end of 2021, Moehring said.

Until the work is completed, Horwart's first courtroom and chamber would be in a small area in the courthouse last used as a courtroom in 2012. The room doesn't have a jury box and has a small gallery, Moehring said.

"The initial courthouse space will be just fine," Horwart said. "The proposed docket of Division 7 will consist of all domestic and probate cases, eliminating the need for a jury box/room until the new courtroom is completed. I suspect the main challenge will be construction noise while court is in session."

"I have been working closely with the county on the layout of the initial courtroom and they have done an excellent job of making changes to accommodate requested modifications from my Division 7 team," Horwart said. "I am very excited to get started."

Security cameras and doors and audio/visual equipment will be added later in the year, said James Turner, county information technology director. That equipment and moving some prosecuting attorney staff out of the space will cost a little more than $88,600, Turner said.

"They will be ready to go pretty quick. The gears are starting to turn in Division 7." Moehring said. 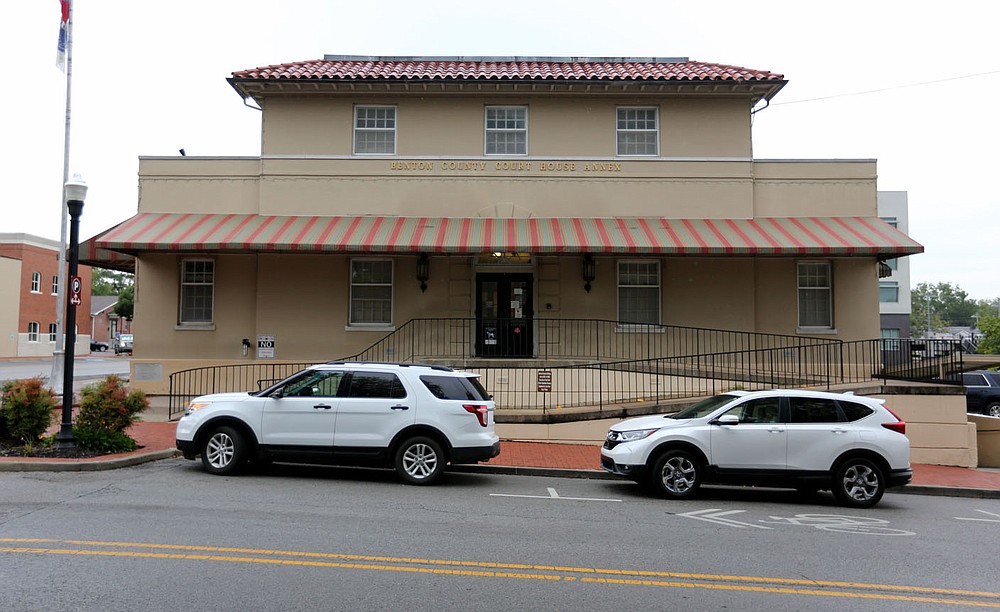 New awnings are visible Thursday, September 10, 2020, on the Benton County Court House Annex in downtown Bentonville. The work is part of the $3.1 million courthouse expansion. The county will spend $231,783 to repair the courthouse annex. Check out nwaonline.com/200914Daily/ and nwadg.com/photos for a photo gallery. (NWA Democrat-Gazette/David Gottschalk) 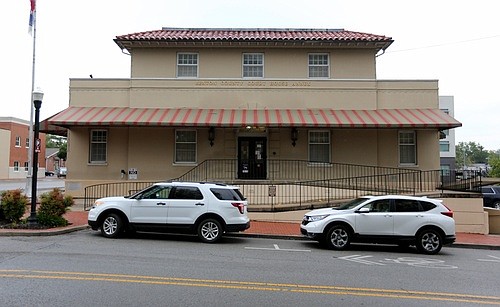 The Sept. 24 Quorum Court meeting will be held in the expanded Quorum Courtroom on the third floor of the County Administration Building.

The new courtroom is roughly 2,000 square feet. The elimination of the east wall added about 800 square feet of space.

Improved video and audio conferencing as well as livestreaming capability are part of the expansion.