E-commerce giant offering signing bonuses in some cities by Compiled by Democrat-Gazette Staff From Wire Reports | September 15, 2020 at 2:26 a.m. 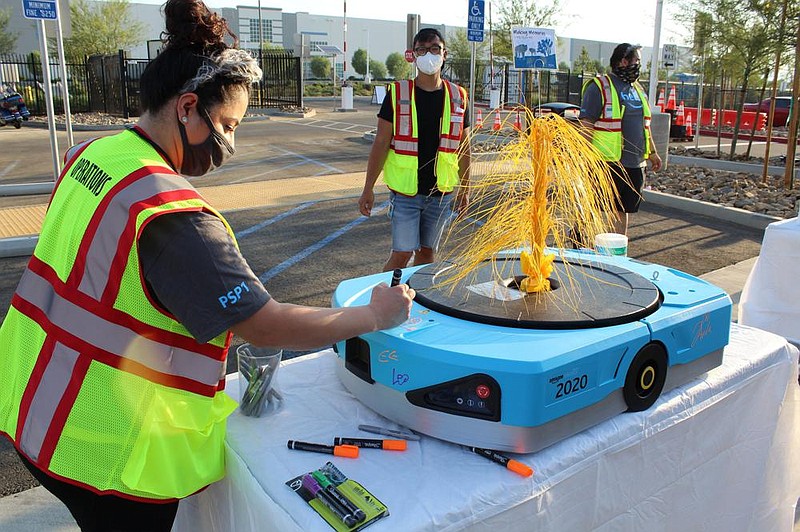 Amazon.com Inc. is hiring 100,000 full-time and part-time employees across the U.S. and Canada, the latest announcement in the Seattle-based e-commerce giant's employment spree.

Amazon said Monday that the jobs are not related to its typical holiday hiring.

The latest hiring drive is the fourth-largest hiring campaign Amazon has initiated this year. All told, they add up to 308,000 positions. By comparison, Amazon said it employed 798,000 Americans at the end of 2019.

Alicia Boler Davis, who oversees Amazon's warehouses, said the company is offering $1,000 signing bonuses in some cities where it may be harder to find workers, such as Detroit, New York, Philadelphia and Louisville, Ky. Starting pay at Amazon is $15 an hour.

The new jobs also include benefits and access to training programs, the company said in a statement. This is in addition to the 33,000 corporate and technology employees the Seattle-based e-commerce giant announced last week, it said.

Amazon has been adding jobs globally as its business and market valuation have soared, increasing numbers of full-time and part-time employees by about 10% to 876,800 in the first six months of 2020, according to its July financial report. Earlier this month, the company announced plans to add 7,000 permanent workers in the U.K. and has made similar announcements in Ireland and South Africa.

Its shares have surged almost 70% this year, lifting its market value to $1.56 trillion, as the company's online shopping services became vital to many households under lockdown during the covid-19 pandemic.

Founder and Chief Executive Officer Jeff Bezos is the world's wealthiest person, with a net worth of about $184 billion, according to the Bloomberg Billionaires Index.

Still, the company has attracted criticism for how it has treated workers. The company posted and then abruptly deleted a position for an analyst to research "labor organizing threats against the company," calling it "inaccurate."

However, labor activists said the listing suggests Amazon is trying to prevent workers from collective bargaining, which drew attention earlier in the year after some employees protested conditions in warehouses that they said put them at risk of catching the coronavirus.

Amazon said in July that it had spent $4 billion in the second quarter on covid-19-related initiatives to keep employees safe and provide them with additional compensation.

Things are about to get a lot busier at Amazon's warehouses. In addition to the Christmas shopping rush, Amazon plans to hold its one of its busiest shopping days, Prime Day, in the fall this year after postponing it from July.

Amazon will be monitoring whether it needs to hire more workers for the holidays, but doesn't have anything to announce yet, Boler Davis said. Last year, it hired 200,000 ahead of the Christmas shopping season.

One company is already preparing for the spike in orders: UPS said last week that it plans to bring in 100,000 people to help it deliver packages during the holiday season.

Competition among major online retailers has intensified as many Americans adapt to a prolonged period of working from home, and consumers look to online shopping to replace visits to the store.

But in the early months of the pandemic, Amazon was caught flat-footed. As consumers rushed to stock up on cleaning supplies, home office equipment and recreational goods, Amazon was rocked by shipping delays and a depleted inventory.

Walmart and Target were able to fill some of that void, using their store locations as pickup depots and e-commerce shipping hubs, exploiting the legacy of an established physical presence. As a result, Amazon's share of the U.S. online retail market fell from 42.1% in January to 38.5% in June, according to data from Rakuten Intelligence. Walmart increased its position from 2.2% to 3.5%, and Target boosted its share from 3.5% to 5.0%.

"Despite their profits, I thought the company's in-stock performance and delivery standards were terrible in many cities, and I didn't think they were particularly great to their front-line workers," said Paula Rosenblum, an analyst for Retail Systems Research in Miami. She added that the company is bracing for some portion of employees to be out sick from covid-19 and other illnesses, and is preparing for a potential blowout Christmas shopping season.

"Let's see if they can recoup the business they gave away to Walmart, Target and Kroger."

Information for this article was contributed by Nour Al Ali and Amy Thomson of Bloomberg News; by Joseph Pisani of The Associated Press; and by Hamza Shaban of The Washington Post.