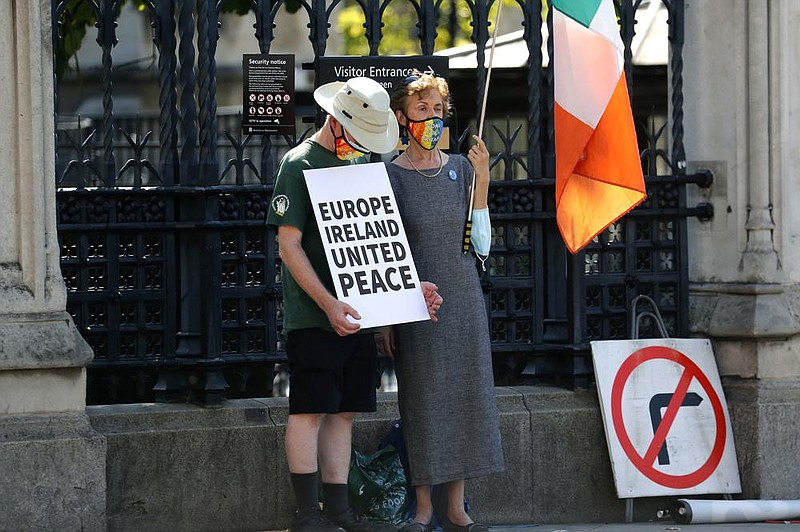 Pro EU protesters stand near Parliament in London, Monday, Sept. 14, 2020. Boris Johnson is facing the possibility of a Tory rebellion and major damage to his chances of a trade deal with the EU unless he removes controversial parts of the internal Bill which is in the House of Commons for its second reading Monday. (AP Photo/Frank Augstein)

LONDON -- Prime Minister Boris Johnson survived a rebellion among lawmakers from his Conservative Party on Monday as the Parliament advanced Brexit legislation even after the government admitted that it would violate international law.

The vote, 340-263, came after a fierce debate in the House of Commons that demonstrated that Britain, despite having cast off from the European Union eight months ago, has yet to put the furies of Brexit behind it.

It is only the first step for the legislation, which would nullify parts of a landmark agreement that Johnson struck with the EU last fall. That deal paved the way for Britain to leave the bloc after 44 years.

Johnson, with an 80-seat majority, was never likely to lose this first vote. But the divisive debate sets in motion a politically perilous period for the prime minister, both with his own party and with the EU.

EU leaders are angered at the prime minister's proposal and have threatened the U.K. with legal action if it does not drop the proposal by the end of the month.

With further legislative hurdles to come, analysts said the danger was less a quick defeat than a gradual leaching away of support that could leave Johnson weakened at a time when his government is battling a resurgence of the coronavirus and the effects of a lockdown-ravaged economy.

Britain also faces other international repercussions, not least with the United States, where congressional Democrats have warned Johnson that his move could scuttle a trans-Atlantic trade deal because it undermines the Good Friday Agreement that ended decades of sectarian violence in Northern Ireland.

Johnson's aggressive move to rewrite provisions of the treaty relating to Northern Ireland has drawn a torrent of criticism from prominent Conservative figures, including former Prime Minister David Cameron, who said Monday that he had "misgivings" about the government's proposal.

"Passing an act of Parliament and then going on to break an international treaty obligation is the very, very last thing you should contemplate," Cameron told reporters, becoming the latest of five former prime ministers -- three of them Conservatives -- to speak out against Johnson's plan.

The government also lost the support of two former Cabinet members -- Sajid Javid, who was chancellor of the Exchequer until Johnson forced him out in February, and Geoffrey Cox, a former attorney general.

"I cannot support the U.K. preemptively reneging" on the withdrawal agreement, Javid said.

Cox said he would vote against the law because it would do "unconscionable" harm to Britain's global standing. His defection was particularly noteworthy because he favored Brexit and was the government's top legal adviser when Johnson negotiated the agreement.

"I simply cannot approve or endorse a situation in which we go back on our word, given solemnly," Cox told Times Radio. "The breaking of the law ultimately leads to very long-term and permanent damage to this country's reputation."

In the heat of the House of Commons debate, Ed Miliband, a former leader of the Labor Party, reminded Johnson that he had signed, promoted and ran his election campaign on the agreement he was now proposing to rewrite.

"What incompetence! What failure of governance!" Miliband bellowed, as Johnson shook his head in disgust. "And how dare he try and blame everyone else."

Despite the prominent figures lining up to oppose the law, there was no sign that Johnson planned to back down. He told Parliament the legislation was an "insurance policy" against an EU that might interpret the withdrawal agreement in a way that could break up the United Kingdom.

Threatening to rip up an agreement with the EU plays well with the hard-line Brexiters in his party. And there are still 3½ months before the Dec. 31 deadline for a trade deal with Brussels, which means Johnson could always compromise later.

Johnson pursued a similar strategy of brinkmanship this time last year, threatening to leave the EU without a withdrawal agreement, which prompted a more widespread mutiny in his party. The prime minister expelled 21 rebels for defying the government.

Johnson kept threatening a no-deal Brexit until October, when he met with Leo Varadkar, then the prime minister of Ireland, and suddenly cut a deal on the treatment of Northern Ireland that opened the door to a broader agreement with Brussels.

It is that deal that Johnson now proposes to renege on, if Britain is unable to agree to long-term trade arrangements with the EU. The government says the legislation is intended to provide a "safety net" for businesses in Northern Ireland, which send and receive goods from the rest of the United Kingdom.

Few analysts expected more than a small band of Conservative lawmakers to abstain or vote against the government Monday. But more may vote for an amendment -- to be introduced next week by a Conservative member -- that would block the government from using the provisions of the bill that would break the law by nullifying the so-called Northern Ireland protocol without Parliament's approval.

[Video not showing up above? Click here to view » https://www.youtube.com/watch?v=1ba0X0sYoGI]

Even that rebellion seems likely to fall short, however, given the size of Johnson's majority and the reluctance of Conservative lawmakers to fall out with a prime minister who delivered a landslide victory less than a year ago.

If the legislation gets through the House of Commons, it goes to the House of Lords, where Michael Howard, who sits in that chamber and who is a former head of the Conservative Party, predicted it would run into a buzz saw of opposition. Still, the Lords rarely thwart bills that have passed the lower house.

For all the fireworks, some analysts still said they believed Johnson would ultimately come to terms with Brussels. The prime minister's threats to break off talks, breach international law or accept a no-deal Brexit are all intended, they said, to prepare the ground for a compromise.

"This is a signal to his Brexit ultras that he is playing hardball with the European Union, which will make it easier when he eventually has to make concessions to cut a deal," said Bale of Queen Mary University.

The risk for Johnson, analysts said, is that he could miscalculate the reaction from the EU, which has so far been measured, or that his government no longer has the bandwidth to conclude a trade deal -- a scenario that is not implausible given growing urgency about a second wave of the coronavirus.

​​​​​Information for this article was contributed by Mark Landler of The New York Times and by Jill Lawless and Danica Kirka of The Associated Press.