Across U.S., activities seen as high-risk attract crowds by Compiled by Democrat-Gazette Staff From Wire Reports | September 16, 2020 at 7:13 a.m. 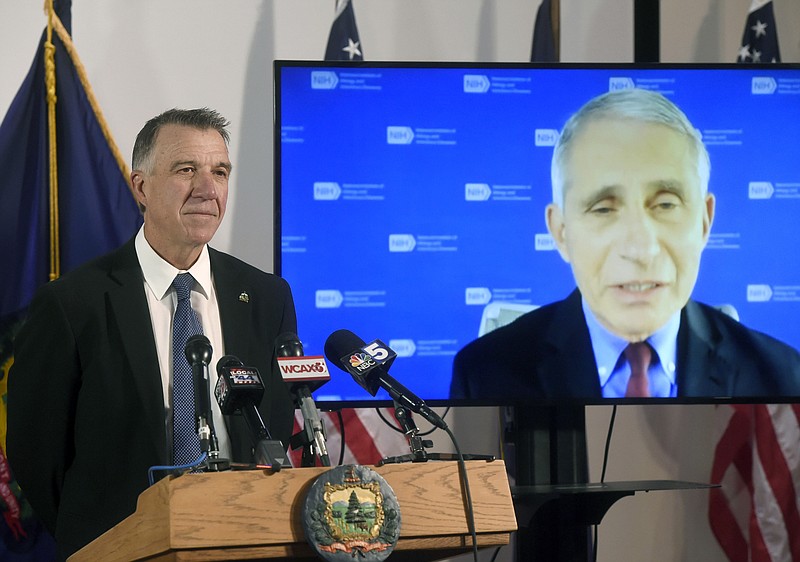 PROVIDENCE, R.I. -- State and local officials around the U.S. again are rolling back social-distancing rules after an abortive effort over the summer, allowing bars, restaurants and gyms to open. Fans are gathering mask-free at football games, and President Donald Trump is holding crowded indoor rallies.

While some Americans may see such things as welcome steps closer to normal, public health experts warn the U.S. is setting itself up for failure.

"Folks are becoming very cavalier about the pandemic," said Mark Rupp, professor and chief of infectious diseases at the University of Nebraska Medical Center. Nebraska's governor ended nearly all of his state's restrictions on Monday, even with new cases of the coronavirus on the rise.

"I think it is setting us up for further transmission and more people getting ill and, unfortunately, more people dying," Rupp said.

The virus has caused more than 6.6 million confirmed infections and more than 195,000 deaths in the U.S., according to the tally kept by Johns Hopkins University.

In recent days, Mississippi has allowed restaurants to expand their customer capacity to 75%. New Jersey reopened gyms and indoor dining at restaurants, though with limited capacity. Michigan's governor allowed gyms to reopen and organized sports to resume. County commissioners in Pinellas County, Fla., on Thursday are set to discuss whether to repeal their mask ordinance.

Public health experts noted that it is safe to resume certain activities in communities where there are low levels of infection.

The nation's top infectious-disease expert, Dr. Anthony Fauci, appeared via video at Vermont Gov. Phil Scott's virus briefing Tuesday and praised the state's response and its steps to reopen safely. He chalked it up to Vermont's emphasis on wearing masks, avoiding crowds and taking other simple precautions.

But elsewhere, experts said, case counts are too high to resume higher-risk activities, such as going to bars, gyms, theaters and stadiums; participating in close-contact sports; or eating inside restaurants.

It's not just government officials who are letting up on restrictions. In Milwaukee, the Roman Catholic archbishop said he will no longer excuse people from in-person worship unless they are ill or are caring for someone who is sick. Meanwhile, cases in Wisconsin are on the rise.

But in parts of the U.S., local officials are cracking down as they see cases climb.

Public health experts said they worry they are seeing a pattern: A drop in cases leads officials and average Americans to relax measures to stay safe, and infections and deaths make a comeback.

"Please, you've done so well, don't let your guard down," Fauci said during the video call with Vermont's governor. "Because if we do, we are going to see surges that are going to put us back to where we were months ago."

Meanwhile, at least seven people have died in connection with a coronavirus outbreak that continues to sicken people in Maine after a wedding reception held over the summer that violated state virus guidelines, public health authorities said.

The August wedding reception at the Big Moose Inn in Millinocket, Maine, is linked to more than 175 confirmed cases of the virus, the Maine Center for Disease Control and Prevention said Tuesday.

Authorities have said more than 65 people attended the wedding, which exceeded the state's guidelines of 50 people or fewer at indoor gatherings.

Maine authorities have identified overlaps between the wedding reception and outbreaks elsewhere in the state. An employee of the York County jail attended the wedding, Maine CDC officials have said. Health officials have also said an outbreak at a Madison rehabilitation center, which is the site of six of the seven deaths, is connected to the wedding because an employee of the facility lives in the same household as a person who attended.

The six people who died were all residents of that facility, and none of them attended the wedding reception, said Dr. Nirav Shah, director of Maine CDC.

The wedding was also officiated by pastor Todd Bell of Calvary Baptist Church in Sanford, Maine. The Maine CDC is currently investigating to determine whether an outbreak at the church is connected to the wedding outbreak. That outbreak has sickened 10 people, Shah said.

"The Calvary Baptist Church has a legal right to meet. The authority of a local Christian church, a Jewish synagogue, or a Muslim mosque to gather for their respective religious services is a time-honored part of our nation's history since its inception," the statement said. "These religious activities are also fully protected under the First Amendment to our United States Constitution."

Separately, federal statistics released Tuesday showed that the coronavirus is killing Hispanic, Black and American Indian children at much higher numbers than their White peers.

The new numbers -- the most comprehensive U.S. accounting to date of pediatric infections and fatalities -- show there were 391,814 known cases and 121 deaths among people under the age of 21 from February to July.

Of those children killed by covid-19, the illness caused by the coronavirus, more than three-quarters have been Hispanic, Black and American Indian, even though they represent 41% of the U.S. population, according to the Centers for Disease Control and Prevention. The federal agency collected data from health departments throughout the country.

The disproportionate deaths among minority-group youths echo pandemic disparities documented among adults. Previous studies have found that the virus's death toll is twice as high among people of color under age 65 as it is for white Americans. People of color also disproportionately make up "excess deaths" -- those killed by the disease without being diagnosed or those killed indirectly as a result of the virus's wide effects on the health care system.

"This is the strongest evidence yet that there are deep racial disparities in children just like there are in adults," said John Williams, chief of pediatric infectious diseases at UPMC Children's Hospital of Pittsburgh. "What that should mean for people is steps like wearing a mask are not just about protecting your family and yourself. It is about racial equity."

One key factor could be the underlying health disparity among minority-group children and young adults. About 75% of those who died had at least one underlying condition; the most frequent were asthma and obesity, two conditions that disproportionately occur in minority-group youths.

"On one hand, the small total number of deaths is reassuring. You're talking about hundreds of thousands of children infected and only 121 killed," said Frank Esper, a pediatric infectious disease specialist at Cleveland Clinic Children's Hospital.

The CDC report emphasized that the relatively low death toll for children was recorded when almost all schools were closed, and that it is unknown how the reopening of schools could affect those rates.

Tuesday's CDC report reinforces another prominent characteristic of the virus -- that it becomes increasingly lethal with age. Among children, 10% of deaths occurred in infants age 1 or younger. Roughly 20% of pediatric cases were between ages 1 and 9. The remaining were between 10 and 20.

Meanwhile, hospitals in England say a shortage of covid-19 tests in the U.K. is jeopardizing medical staffing and preparations for a potential surge in coronavirus cases this winter.

Inadequate testing is leading to increased absences in the National Health Service as medical workers are forced to self-isolate while they and their family members wait after possible exposures, according to NHS Providers, a group that represents hospitals. Last weekend, hospital leaders in three different cities raised concerns about testing, said Chris Hopson, the group's CEO.

"The problem is that NHS trusts are working in the dark -- they don't know why these shortages are occurring, how long they are likely to last, how geographically widespread they are likely to be and what priority will be given to healthcare workers and their families in accessing scarce tests," Hopson said Tuesday.

Elsewhere, France will reward foreign health care workers and other front-line personnel who distinguished themselves in the fight against covid-19 by fast-tracking citizenship applications for those who want to become French.

Signed by Marlene Schiappa, the ministry official in charge of citizenship issues, the circular says foreigners who are eligible can be naturalized after just two years of residency in France, instead of the usual minimum of at least five years, because of the "important services" they rendered. It specifically mentioned health care workers.

The circular did not say how many people might benefit from the decision.

With 4.93 million confirmed cases, India has the second-highest total in the world after the U.S. Infections have maintained an upward surge amid an ease in coronavirus restrictions nationwide. More than 600,000 new cases have been confirmed in the past week alone.

Elsewhere in the Asia-Pacific region:

• Nearly 1.8 million Hong Kong residents took voluntary coronavirus tests as part of a large community testing program, resulting in 42 cases being identified, the government said Tuesday. The two-week testing program, which ended Monday, was aimed at identifying silent carriers of the coronavirus to reduce a wave of cases that began in July.

• Thailand's Cabinet has approved in principle a plan to begin reopening the country to foreign tourists by issuing special renewable 90-day visas and limiting their numbers to 1,200 a month.

• China has reported eight new coronavirus cases, all from people who entered the country.

• South Korea's daily coronavirus tally has stayed in the low 100s for a third consecutive day, maintaining a downward trajectory.

Information for this article was contributed by Michelle R. Smith, Bobby Caina Calvan, Wilson Ring, Danica Kirka, John Leicester, Patrick Whittle and David Sharp of The Associated Press; and by William Wan of The Washington Post. 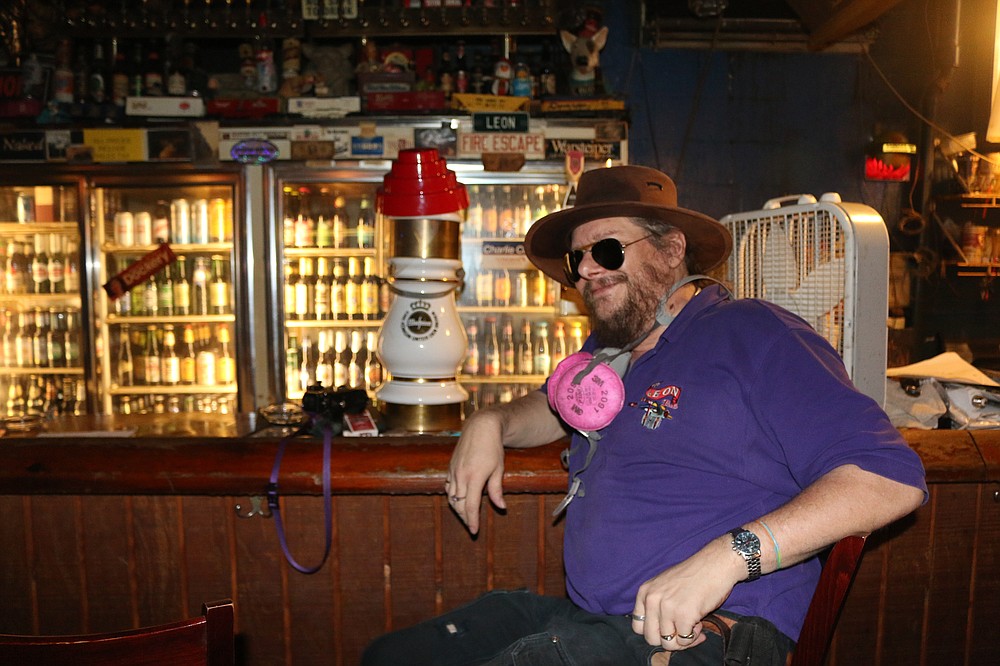 Bill Hasselback, the owner of The Leon Pub in Tallahassee, Fla., says bars have been treated unfairly during the coronavirus outbreak. He spent Monday night, Sept. 14, 2020, at his bar hoping more of his regular patrons will begin returning, now that Florida has eased more restrictions to reopen the state's economy. (AP Photo/Bobby Caina Calvan) 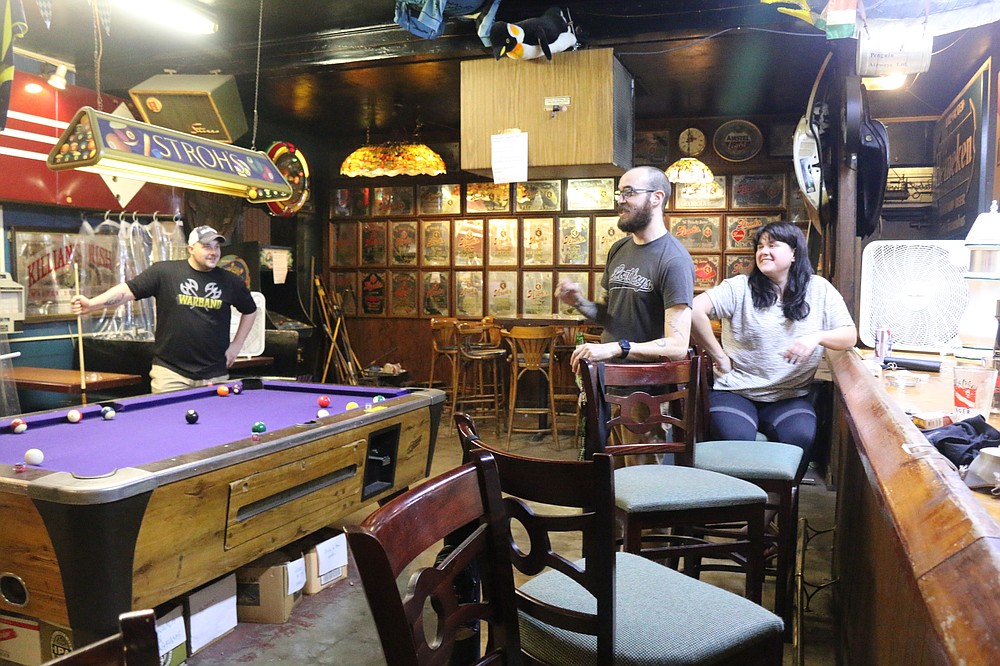 Matt Helms, far left, chats with Zach Preston and his wife Allie Preston at The Leon Pub in Tallahassee, Fla., on Monday night, Sept. 14, 2020. They have been regulars at the once-popular watering hole, which is trying to revive its business in the wake of the coronavirus pandemic. (AP Photo/Bobby Caina Calvan) 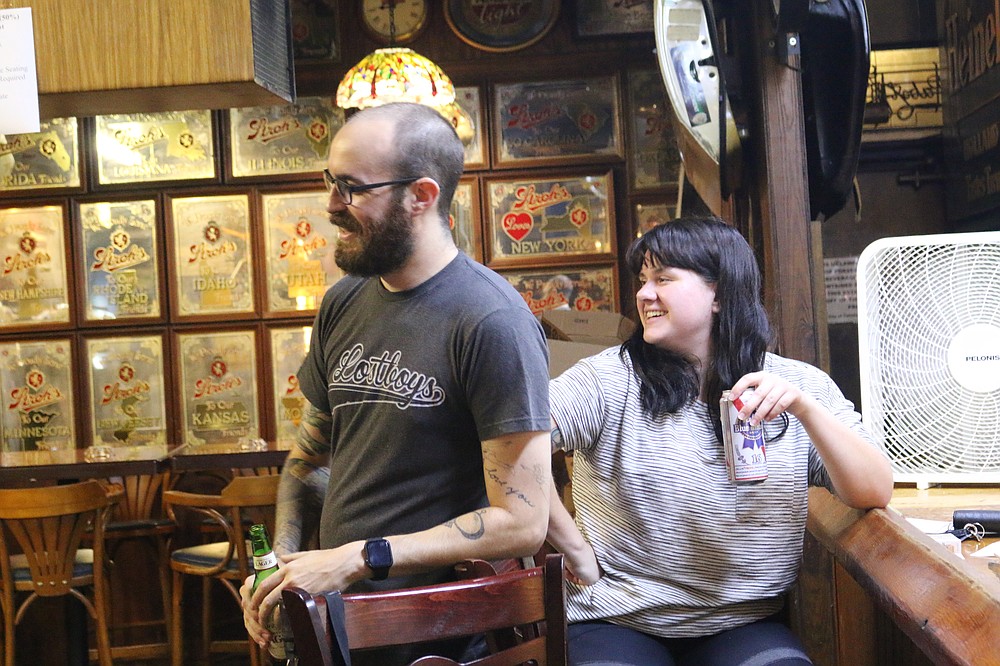 Zach Preston and his wife Allie Preston are regulars at The Leon Pub in Tallahassee, Fla. They spent Monday night, Sept. 14, 2020, at the once-popular watering hole. The pub hopes that more of its patrons will begin returning to help revive business in the wake of the coronavirus pandemic. (AP Photo/Bobby Caina Calvan)
ADVERTISEMENT