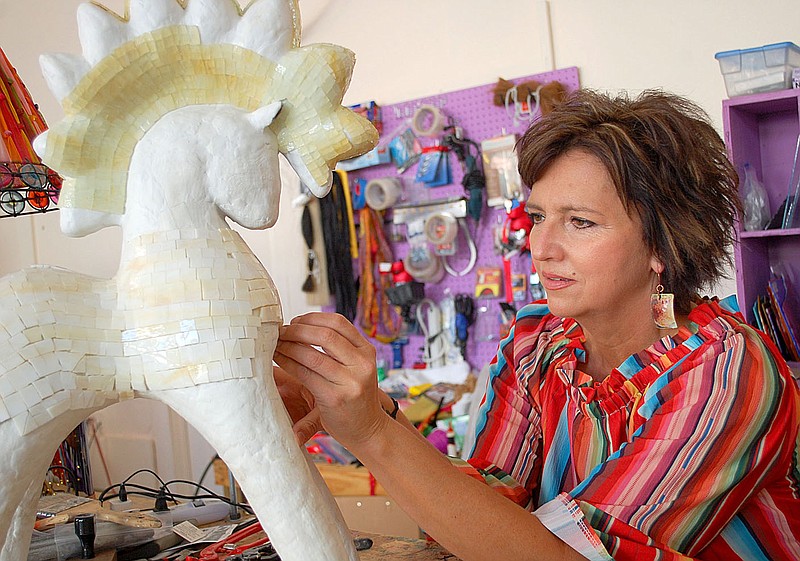 Janelle Jessen/Herald-Leader Artist Amy Haid places hand-cut pieces of glass on a abstract pony sculpture at her new studio on downtown Siloam Springs. The mosaic sculpture already has more than 2,000 pieces of glass.

From a life-sized sculpture of a steer to earrings and jewelry, artist Amy Haid uses the color and brilliance of glass along with materials such as copper and leather to bring her work to life.

Her mosaic sculptures have been exhibited at the Gaylord Texan Resort in Grapevine, Texas, for four years in a row, and she has made custom logo pieces for country musicians such as Neal McCoy and Wade Bowen.

Haid has opened a studio in downtown Siloam Springs where she will create and exhibit her art. She will be debuting her new jewelry line, "Wild at Heart by Amy Haid."

Haid recently moved to Siloam Springs to be closer to her mother, Ann Haid, and sister, Michelle Eudy. She grew up in Texas but has deep roots in Siloam Springs, where she often came to visit her grandparents, Tom and Grace Whiteside, when she was a youngster. Her grandfather was a banker, but he expressed his creativity through the written word and poetry, eventually publishing several books, she says.

Like her grandfather, Haid has a creative streak, but she explored several careers and mediums before she found her passion.

"As a little 8-year-old girl, I sketched all the time," she says. "I just loved art, and it wasn't really around me. Then I didn't really have any aspirations of glass, but I was around New Mexico and I saw all the beautiful jewelry -- turquoise jewelry -- and color. Then I went and I sang overseas for a month in Europe, and I saw all those beautiful fine art mosaics, from the top of the ceiling to the floor, but I don't know that I thought I ever could do that."

She decided to make a six-foot glass table, her first glass project, 20 years ago when her son was 6 months old and fell in love with the shimmer and reflection.

"I am a Texas girl and love the bling, and so I already like shiny things... The raw medium is just beautiful," she says.

Haid taught English as a second language and worked as a financial adviser in the banking industry before she became a professional artist. Prior to opening her first studio in 2012, Haid was working in a bank and staying up until 2 or 3 a.m. to work on her art. She was so passionate about art that it was painful not to do it, she says.

Then one day Haid answered a random call the receptionist would usually pick up. It was a woman who had been told a mosaic artist worked at the bank and was looking for her. Two weeks later, Haid quit her job to open her studio.

"It was really a total God moment for me," she says. "It definitely upped my faith, and it just showed me when you are the lowest feeling, you can be so close to something, because I was really sad about not being able to do art and I was just so close. That is why I want to always encourage people that are going after their dreams, so that they realize that it can feel so far removed from where they want to be at, but it's just right around the corner."

Haid describes herself as "high-wired," but she can sit for hours and lose herself in creating a mosaic. When she creates a large piece, Haid starts with a large block of polystyrene, which she carves and sculpts down to the shape she wants. She covers it with a thin layer of fiberglass, concrete or epoxy, then places the hand-cut glass piece by piece.

Her largest piece, titled "Maverick," depicts the life-size head and shoulders of a steer. It has more than 15,000 individual pieces of hand-cut glass and took about 500 hours to create, she says. "Maverick" was the first piece of art chosen for the Gaylord Texan exhibit, where more than 300,000 people get a chance to see the art each summer, she says.

Another large piece, a zebra named "Mistari Maridadi," which means beautiful stripes in Swahili, has 9,715 pieces of hand-cut stained class and took more than 300 hours to create for a private collector. Some of the pieces of glass were so tiny and the curves of the zebra's neck were so tight that Haid had to place the pieces with tweezers.

Haid has a line of smaller abstract pony sculptures with real horse hair manes. They are inspired by her late father's love of horses. John Haid was a horse breeder, and she grew up going to the barn and the race track with him, she says.

"I told my dad, 'We are really the same person, you love horses and I love glass,'" she says.

Haid has also used glass and mixed media, such as cow skulls, to turn logos into custom pieces of art that the owner can display in their home.

Haid has long had a "Paisley Spur" line of jewelry, and she recently added a more boho eclectic line called "Wild at Heart," she says. She uses the heat of the flame from a torch to manipulate metal and layers of glass to bring out colors and textures in her jewelry.

Haid says Siloam Springs has been very welcoming and supportive of her studio. She hopes to have an interactive space in her window where people on the street can watch her work and to develop a children's art program similar to the one she taught in Texas.

"I do believe that God had a purpose because it's just been in me all my life," Haid says of her creative work. "Anybody that's been around me knows that art is breath for me." 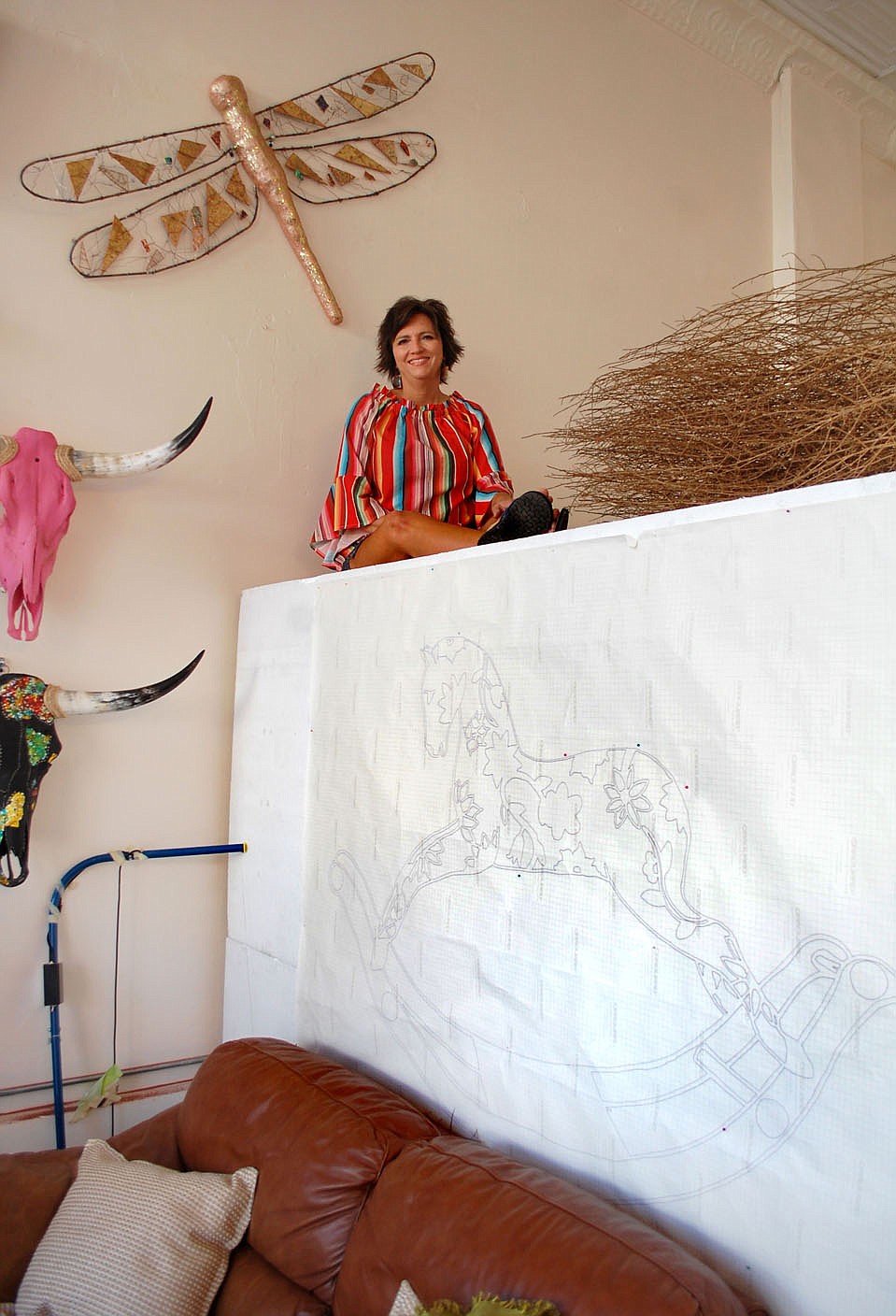 Janelle Jessen/Herald-Leader Amy Haid sits on top of a giant block of polystyrene that will become one of her mosaic sculptures. A tracing of the sculpture is visible on the front of the block. Once the artwork is shaped, Haid covers it with a thin layer of fiberglass, concrete or epoxy, then places hand-cut glass piece by piece. 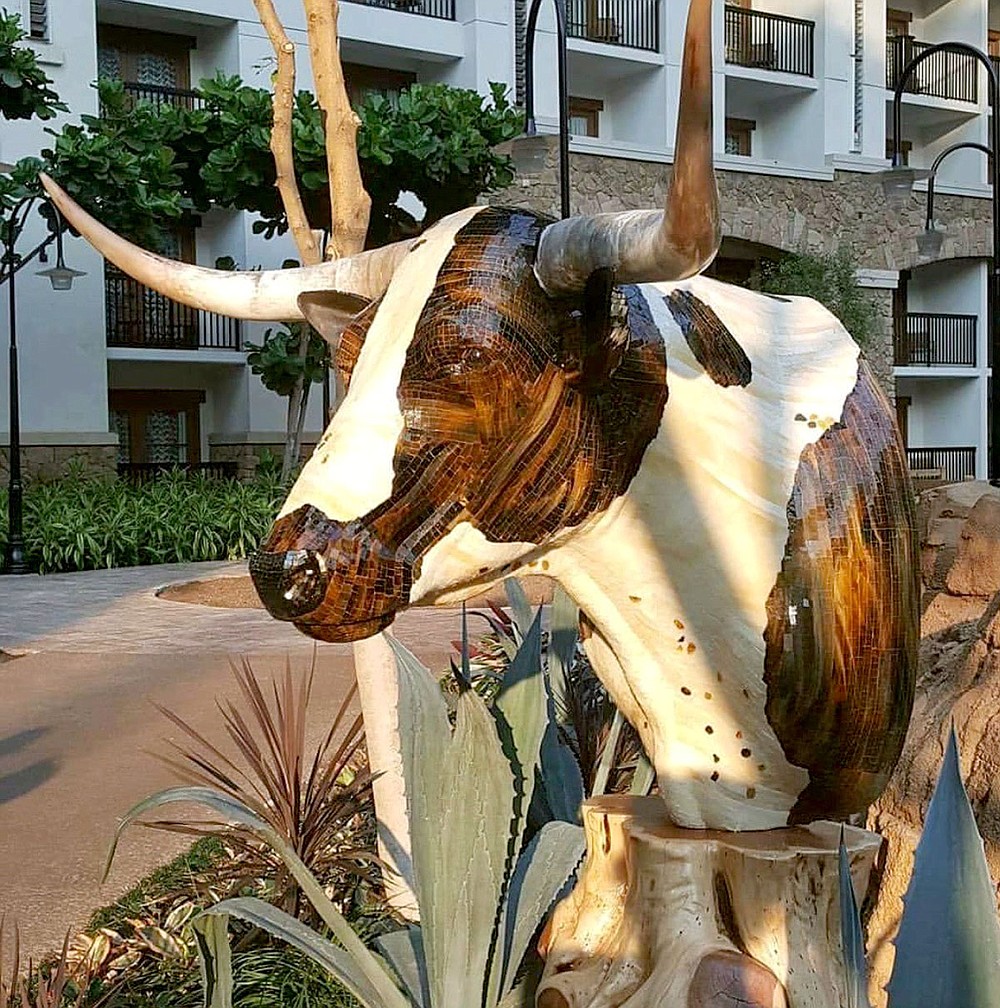 Photo submitted Amy Haid's largest mosaic sculpture is the life-sized bust of a steer titled "Maverick," which was exhibited at the Gaylord Texan Resort in Grapevine, Texas. 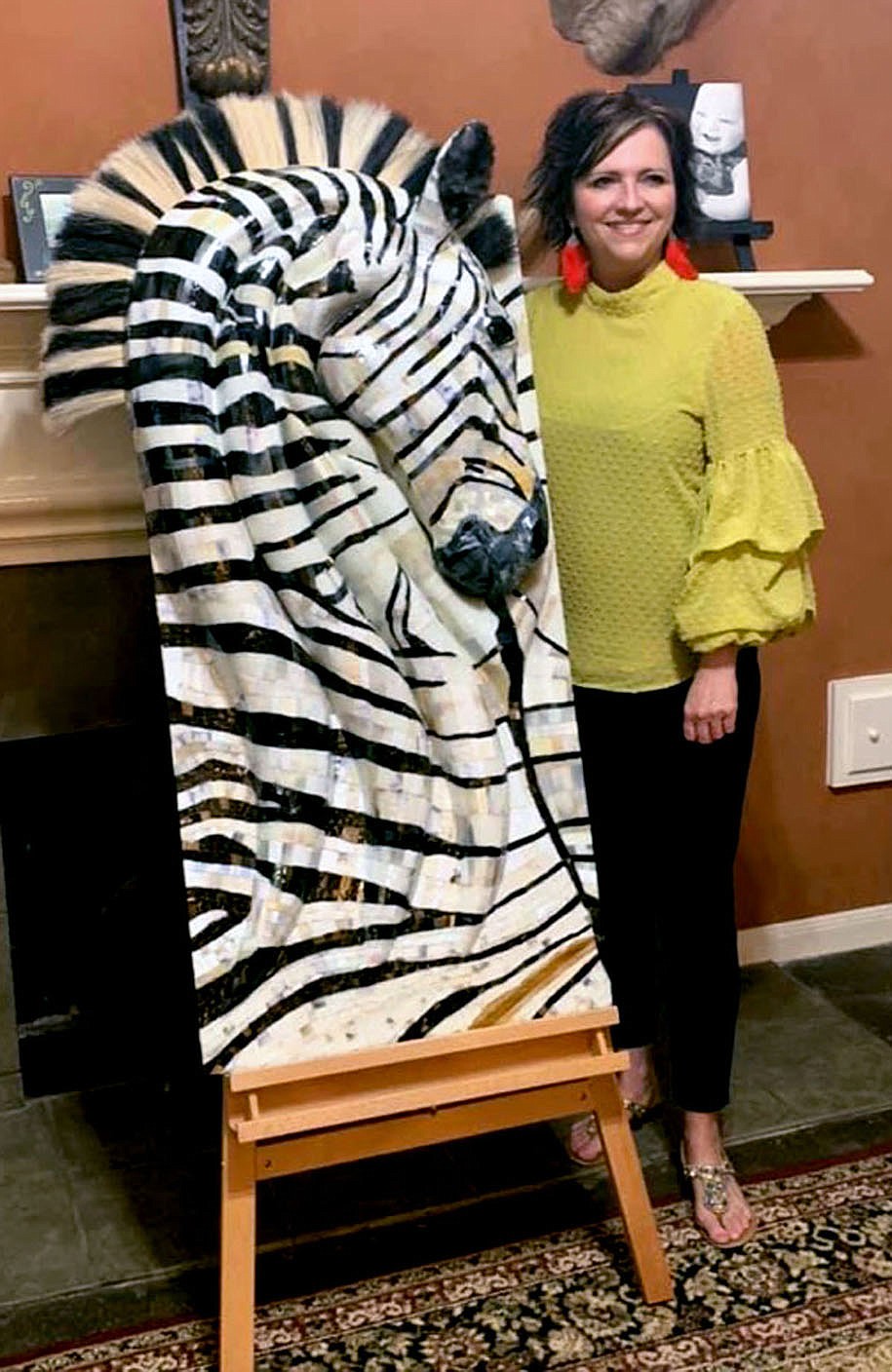 Janelle Jessen writes for the Siloam Springs Herald-Leader. Email her at jjessen@nwadg.com.