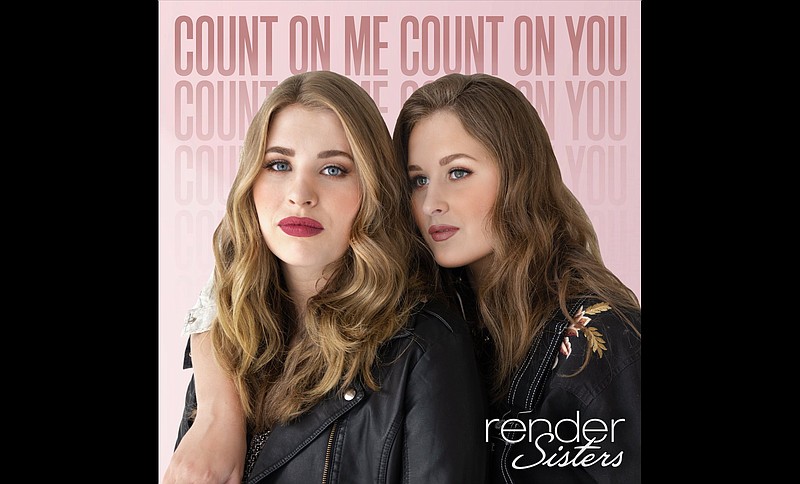 Special to the Democrat-Gazette

It's a Friday afternoon earlier this month and the Render Sisters are just home from classes at Sheridan High School.

Like most teenagers, they're likely looking forward to a couple of days off from school. Unlike many of their classmates, however, they are starting their weekend doing publicity for their latest single.

"Count on Me, Count on You" follows "Lost Boy" as the second track from the siblings, who live with parents Chad and Dawn on the family farm near Pine Bluff.

Recorded in Nashville, Tenn., the song is a sweet, country-pop tribute to sisterly bonding that the duo wrote with Nashville songwriter-producer Britton Cameron and features their interwoven vocal harmonies.

"It's about us being sisters and our lives and how we take care of each other," says 14-year-old Stella.

"I don't know if this one is our favorite, but this one was definitely the easiest to write," says Mary-Keaton, 16. "It just hit so close to home."

Render Sisters · Count On Me, Count On You

[Music player not showing up above? Click here to listen » arkansasonline.com/917render]

The video will be officially released Friday on the Heartland Network's "Country Music Today" show, though we have a first-listen to the single here: arkansasonline.com/917render.

The video, directed by Josh Sikkema, was filmed at the Render family farm.

"We got to really be ourselves in the video," Stella says. "We rode around in our jeep and had a bunch of fun together."

"It was really fun to shoot," Mary-Keaton adds.

Grand Ole Opry member Pam Tillis, who met the girls at an event for young artists in Nashville, directed the "Lost Boy" video, which was also shot on the farm.

"They both look very different," Mary-Keaton says. "The theme of 'Lost Boy' was very staged. 'Count on Me, Count on You' looks like me and Stella living our everyday lives."

The sisters were first inspired by their grandmother, Linda Render, a music teacher, though they weren't always allowed to harmonize around the house.

"We were banned from singing together when we were younger because of how much we would fight when we practiced," Mary-Keaton says. "But at about ages 8 and 10, our mom started letting us sing together again and we haven't stopped."

Growing up, they sang in church and were soon performing at county fairs.

Through the Little Rock-based Jettway Performance, a music lesson and performance studio, they performed at the Arkansas State Fair and at shows in Nashville, Branson and Dallas. They also piqued the interest of Bernard Porter of Nashville-based PGC Artist Development, who connected them with Cameron and Tillis.

"She has kept up with us ever since," Mary-Keaton says of singer Tillis, who stayed at the Render home while filming "Lost Boy" in March and who has become a mentor.

"She is such an amazing artist and has helped up out, showing us the real way to do things," Stella says. "She is so work-minded. Once she gets her mind on doing something, she does it."

"The moment I met the Render Sisters I could sense their maturity," Tillis says in a news release. "My unexpected moment came when I heard them sing 'Lost Boy' and how easy they made it all sound. It was an intriguing melody that caught me off guard, with Everly-esque harmonies and simple but haunting lyrics. These gems in the rough from rural Arkansas don't need much polishing, just more opportunities to do what comes naturally."

Along with Tillis, both sisters count Kasey Musgraves and Dolly Parton as influences.

"We've always listened to country music, but we love most kinds of music," Mary-Keaton says.

Since the pandemic has prevented them from performing, the sisters have had time to write, focus on school and be with their family.

Musically, their next step is to compile an EP.

"We hope that by this time next year we will have our EP out," Stella says. "We have three songs recorded and mastered in Nashville."

Things are starting to take off for the siblings, but they are staying grounded.

"We try to have a balance between our school life, our music life and our family life," Stella says.

"It is so crazy how big it's gotten," Mary-Keaton says. "Not that it's huge, but people are helping us out. We're still so awestruck. It's happened very fast."