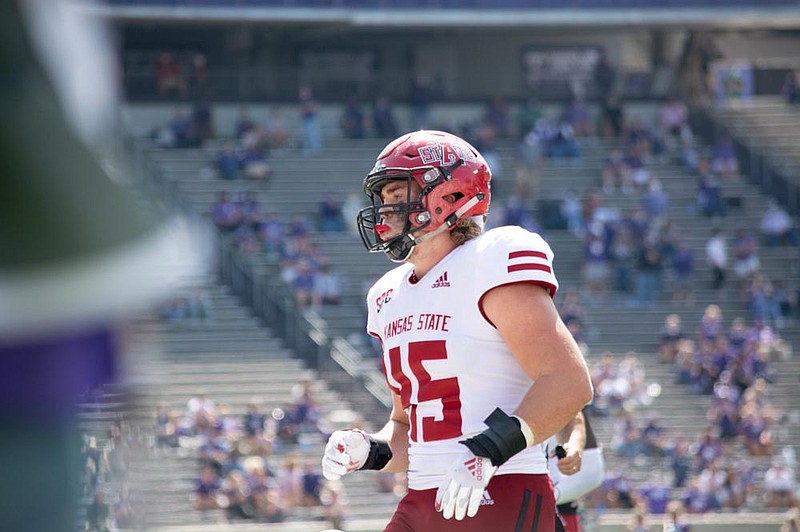 Sophomore TW Ayers, a former walk-on, has become useful for Arkansas State on both sides of the ball at tight end, fullback and defensive end, as well as special teams. (Photo courtesy of Arkansas State University)

The cliche that a certain player was born to play football is often overused.

But in the case of TW Ayers, it's the perfect way to describe the Arkansas State University redshirt sophomore.

Ayers, a former walk-on, has become in some ways a college football phenomenon in the first two weeks of ASU's season, scoring a touchdown and recording a sack. Combine that with his old school look and smash-mouth-football style of play, he's become the ultimate "football guy."

His 6-2, 250-pound frame makes him a brick wall for the Red Wolves, who use him as a battering ram on both sides of the ball as a tight end, fullback and defensive end. And his cowboy collar combined with his curly-haired mullet makes him look like former All-American Oklahoma linebacker Brian Bosworth.

"Just that old-school, 80s-football vibe," Ayers said. "It's my trademark now, I guess."

And while he's garnered an unusual amount of attention outside of the program for his off-field appearance and on-the-field versatility, inside ASU's locker room he's become the model player coach Blake Anderson wants his team to be.

"The mean mullet," Anderson said after the Kansas State game. "I mean, he scores his first touchdown a week ago and then gets a sack this week. That is the picture of our football team. A guy that will do whatever you ask him to do.

But Ayers hasn't always been a football player. His dad, Rodney, actually didn't let Ayers play football at a young age and instead had him wrestle, which Ayers credits his scrappy play for today.

When Ayers did start playing football, he was an immediate standout. Growing up in Lamar, Mo., which has a population of approximately 5,000, there weren't many kids the size of Ayers.

At 245 pounds as a sophomore, Ayers played both ways for Lamar and helped them win four consecutive 2A Missouri state championships, earning all-state recognition his final three years. His senior year he totaled 99 tackles and eight sacks and was named the Class 2A Defensive Player of the Year. He also ran a 4.8 40-yard dash and competed on the track team where he ran the 100 hurdles. He was also a top student in the classroom, earning a 4.0 grade-point average and acquiring 19 college credit hours.

But, like many players who walk-on at Group of 5 schools, Ayers was not heavily recruited. In fact, he wasn't recruited nearly at all at the Division I level.

"They all missed a diamond in the rough is what they did," Rodney Ayers said. "He was overlooked by everybody."

But not Arkansas State.

ASU, which is roughly five hours from Lamar, saw promise in Ayers, offering him a walk-on position to play tight end. Iowa State and Texas State were two of the only other programs who showed interest, and due to the shorter distance and recent winning tradition, Ayers chose the Red Wolves.

"I just felt like I really fit in here," Ayers said. "I came in and I may not have been the best athlete or best at catching the ball or anything like that, but I was always one of the most physical and that's what prided myself on."

Ayers' work ethic has earned him playing time in his time in Jonesboro. After his first season, he earned a surprise scholarship when Anderson announced it unexpectedly at a team meeting. Since then, Ayers has been a main contributor for the Red Wolves, playing mostly on special teams and serving as the third-string tight end and coming in on short yardage situations.

Against Memphis, he caught the first touchdown of his career. But it was 1 1/2 weeks before then that Anderson actually had him switch sides of the ball.

With covid-19 keeping players out and ASU thin at defensive end, Anderson and defensive coordinator David Duggan thought Ayers could give the defensive line so much needed depth. Ayers didn't hesitate to say yes when Anderson asked him if he'd be willing to move,

"It was out of nowhere," Ayers said. "It just felt natural with the drill work and stuff that we were doing. So we made the switch and they put me in a black jersey. And here we are."

And Ayers didn't wait to make an impact on that side of the ball, sacking Kansas State quarterback Skylar Thompson halfway through the first quarter to force third and 17.

Having played the position in high school, Ayers said the transition wasn't as hard as he expected. But given that he hadn't played defense in three years, he did have some catching up to do. And now, splitting time with the offense and defense at practice in meetings, he knows it'll be an extra load.

"It was definitely a big learning curve," Ayers said. "I told myself: If I screw something up, I'm just going to be really physical while I'm doing it and hopefully everything else will take care of itself."

That attitude is what makes Ayers a team favorite: He always plays hard. According to those on the team, his work ethic is second to none on the practice field and in the weight room.

"I love TW," Duggan said. "He's one of those guys that's just an old school guy who goes to work every day, doesn't say too much and just give you great effort -- no matter which side of the ball he's on. He's physical. He's extremely strong at the point of attack. I think he's going to blossom into that role and really help this football team as a defensive end."

And, of course, his mullet has become a fan favorite.

"At first it was just a joke. But then I was that guy with a mullet," said Ayers, who used to sport a 1950's flat-top cut in high school. "Eventually, at some point in my career, I'd like to do a Brian Bosworth-type mullet. That's kind of the goal. But I can't do that too early. I've got to save it for some time special, maybe toward the end of my career."

Ayers and his mullet will graduate this May with a degree in business administration and three years of eligibility left thanks to covid-19 NCAA athletics guidelines. He's sure to be a key contributor for the Red Wolves in years to come -- on both sides of the ball.

After football, he's unsure of what he'll do. Maybe work with his dad at his underground construction business. Or maybe something outdoors as he's an avid fisherman and hunter.

Whatever he does, though, those who know him best say he'll likely exceed expectations similar to what he's done in Jonesboro.

"We always taught our kids that there's a huge difference between confidence and cockiness," Rodney Ayers said. "And TW is a very humble man. He will rise to the top. He's that type of kid." 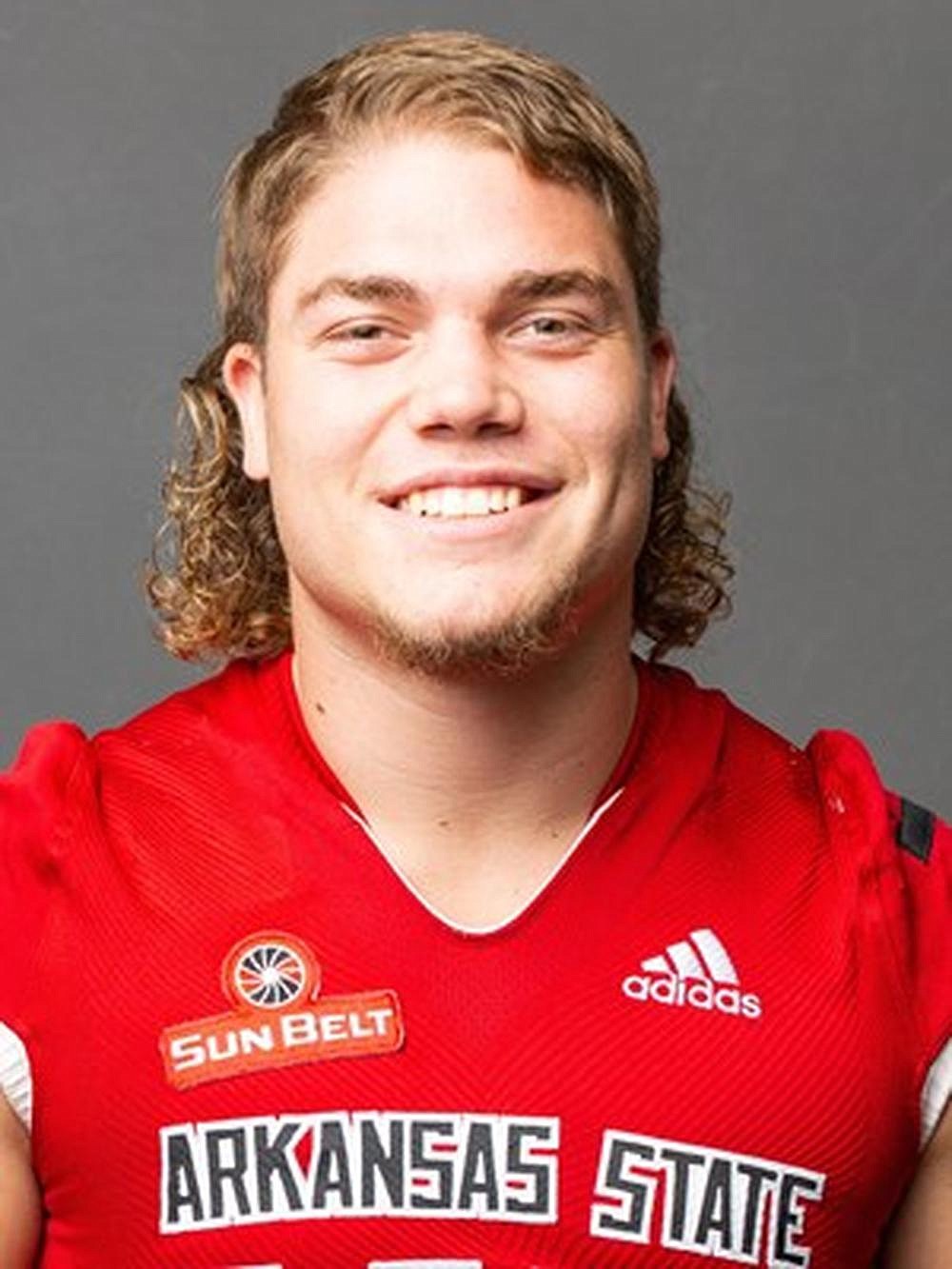