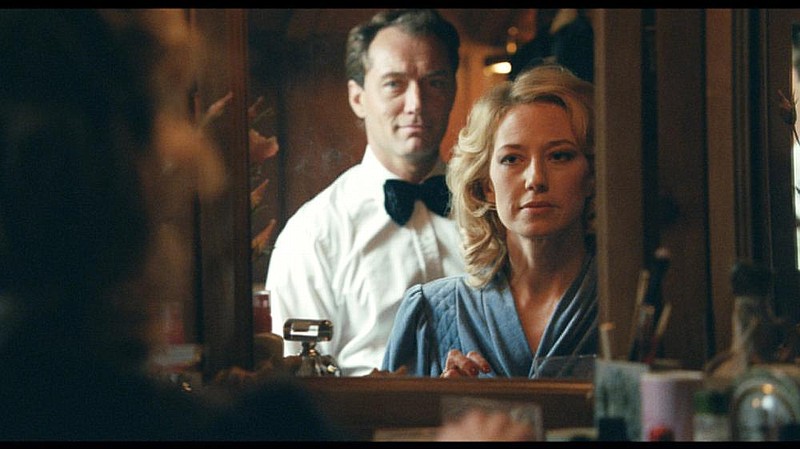 Rory (Jude Law) and Allison (Carrie Coon) are an upwardly mobile couple who move from the New York City exurbs to a country estate outside London in Sean Durkin’s drama “The Nest.”

In his last movie, 2011's "Martha Marcy May Marlene," Sean Durkin explored life inside a cult. In his new film, "The Nest," Jude Law plays Rory O'Hara, a commodities trader who thinks he can buy happiness.

The people in the cult were a little smarter.

To Durkin's credit, the writer-director manages to create just enough backstory to see how Rory came to base his life on a hopeless quest. While his life seems to be going well in New York, we sense serious discontent brewing.

Rory's suburban home is comfortable, and his wife Allison (Carrie Coon) is satisfied bringing in a few bucks of her own teaching equestrian lessons. His teenage daughter Samantha (Oona Roche) and his 10-year-old son Benjamin (Charlie Shotwell) give each other grief but thankfully do nothing that merits their parents' attention.

But for Rory, the American Dream seems a tad hollow.

It's the 1980s, and financial regulations are loosening, and Rory believes potentially lucrative translations are waiting for him back in his native UK. He upends his entire family and moves to a palatial estate in Surrey and even gets a horse for Allison so that she no longer has to rent one. He rejoins the London firm where he started his career and enrolls his kids in elite schools.

Of course, everything goes wrong from here.

Rory may handle large sums of cash, but he doesn't have much of his on hand. If his decision to move seems doomed from the start, Durkin and Law vividly capture the voids in his life so that viewers can understand Rory without having to like him.

You can see the class resentment burning inside him, and we learn enough about his upbringing to see why he proceeds when others would realize it's time to quit. The trappings of wealth aren't any fun if you're scrambling to pay for them.

In some ways, "The Nest" is really about Allison and how she gradually discovers her own spine. Hanging out with Rory's colleagues is not much fun, and Coon makes it easy to relate to Allison's discontent as they boast about experiences she and her husband have never had. While Rory is wheeling and dealing in London, she's doing farm work and coming closer to enjoying herself.

Watching Allison's confidence gradually return despite some horrifying setbacks keeps the film from becoming a one-note exercise. Coon holds her own against Law's formidable talents and gradually walks away with the movie.

Durkin's pace is slow, but he has a gift for keeping the predetermined ending and all the things leading up to it from becoming dull. We hear just enough of the conversations to know something's off, but he doesn't go overboard in explaining how his characters have reached that point.

He arouses our curiosity but doesn't answer all our questions. Unlike the cult in his previous film, Durkin expects viewers to figure out how Rory's ambition and Allison's pushback will play out. Perhaps his characters would be happier if they could trust each other the way Durkin trusts his audience.

Rating: Rated R for language throughout, some sexuality, nudity and teen partying