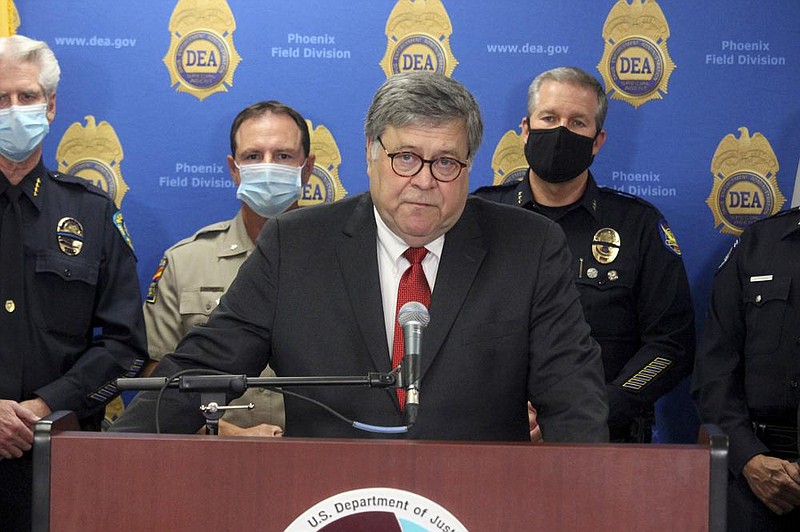 U.S. Attorney General William Barr speaks at a news conference, Thursday, Sept. 10, 2020, in Phoenix, where he announced results of a crackdown on international drug trafficking. Barr spent much of his time attacking mail-in voting, defending a Justice Department decision to take over defense of President Trump in a defamation case and discussing the civil unrest triggered by the killing of George Floyd by Minneapolis police in May. (AP Photo/Bob Christie)

WASHINGTON -- In a memo to U.S. attorneys Thursday obtained by The Associated Press, the Justice Department emphasized that federal prosecutors should go after demonstrators who cause violence -- and even sedition charges could potentially apply.

The sedition statute doesn't require proof of a plot to overthrow the government, the memo read. It instead could be used when a defendant tries to oppose the government's authority by force.

Attorney General William Barr has been pushing his U.S. attorneys to file federal charges in protest-related rioting and violence whenever they can, keeping a grip on cases even if a defendant could be tried instead in state court. Federal convictions often result in longer prison sentences. Sedition alone could lead to up to 20 years behind bars.

The memo cited as a hypothetical example "a group has conspired to take a federal courthouse or other federal property by force," but the real thing took place in Portland, Ore., during clashes that occurred night after night between law enforcement and demonstrators.

Justice officials also explored whether they could pursue either criminal or civil rights charges against city officials there, spokeswoman Kerri Kupec told the AP. She would not say whether charges are still being considered.

The Trump administration's crackdown on protest violence has already led to more than 300 arrests on federal crimes since the death of George Floyd in late May.

"The speed at which this whole thing was moved from state court to federal court is stunning and unbelievable," said Charles Sunwabe, who represents an Erie, Pa., man accused of lighting a fire at a coffee shop after a May 30 protest. "It's an attempt to intimidate these demonstrators and to silence them," he said.

Some cases are viewed as trumped-up and should not be in federal court, lawyers say, including a teenager accused of civil disorder for claiming online "we are not each other's enemy, only enemy is 12," a reference to law enforcement.

Violence has popped up in Rochester, N.Y.; Minneapolis; Washington, D.C.; and Chicago. Federal officials were called to Kenosha, Wis., after large demonstrations and riots following the shooting of Jacob Blake, and the shooting of two demonstrators and later arrest of a 17-year-old in their deaths. That teenager has not been charged with any federal crimes; neither was a man accused of shooting and killing a demonstrator in Louisville, Ky., after the death of Breonna Taylor.

While Barr has gone after protest-related violence targeted at law enforcement, he has argued that there is seldom a reason to open sweeping investigations into the practices of police departments. The Justice Department, however, has initiated a number of civil rights investigations into individual cases. Barr has said he does not believe there is systemic racism in police departments.

Federal involvement in local cases is nothing new. Officials across the country turn to the Justice Department in violent crime and gang cases where offenders could face much stiffer federal penalties and there is no parole.

Police chiefs in several cities have pointed to the importance of their relationships with federal prosecutors to file charges that can result in long prison sentences to drive down violent crime.

Even before the unrest earlier this year, the Justice Department was stepping in to file charges in states where the government believes justice is not being fully pursued by local prosecutors.

In January, for example, the department filed federal hate crime charges against a woman accused of slapping three Orthodox Jewish women in one of several apparently anti-Semitic attacks reported throughout New York during Hanukkah.

District of Columbia Mayor Muriel Bowser, a Democrat, has called for the Justice Department to pursue federal charges against violent demonstrators, going as far as accusing the administration of declining to prosecute rioters.

About one-third of the federal protest-related cases are in Portland, Ore., for crimes such as assaulting a deputy U.S. marshal with a baseball bat, setting fires and setting off explosives at the federal courthouse, and throwing rocks at officers. 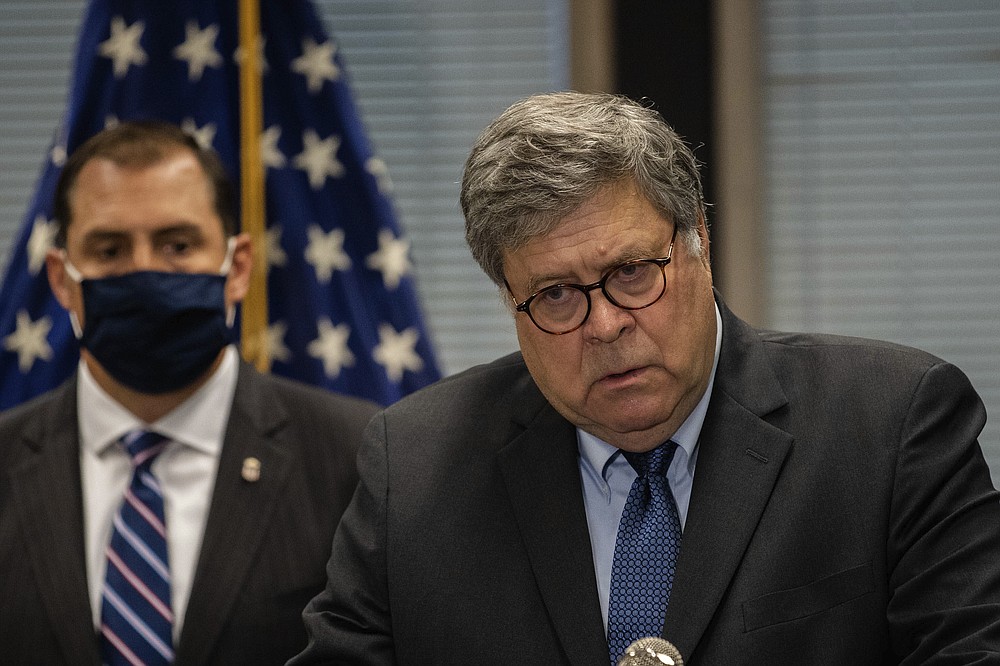 Attorney General William Barr speaks during a press conference about Operation Legend at the Dirksen Federal Building, Wednesday morning, Sept. 9, 2020, in Chicago. Barr said the operation was "critical in cutting Chicago's murder rate roughly in half since before the operation." (Pat Nabong/Chicago Sun-Times via AP) 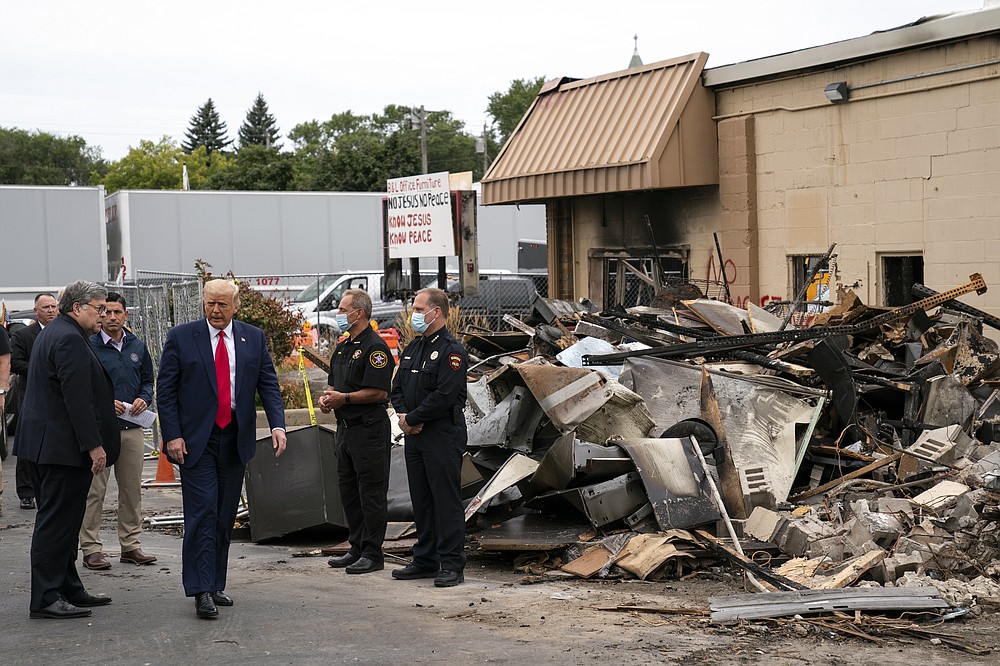 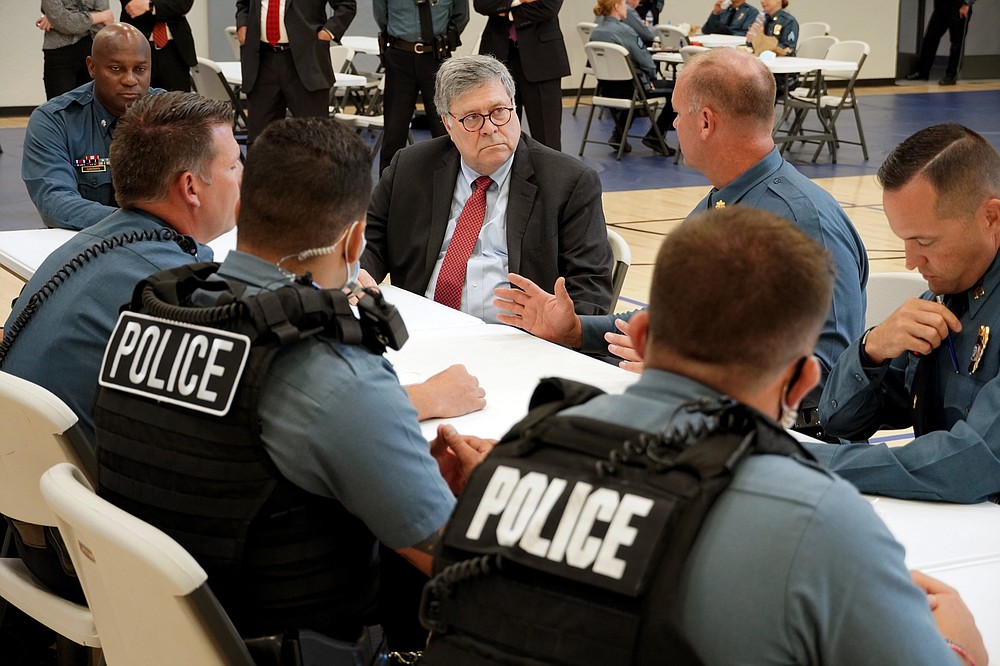 FILE - In this Aug. 19, 2020, photo Attorney General William Barr participates in a roll call with police officers from the Kansas City Police Department in Kansas City, Mo. In a private conference call this week with his U.S. attorneys nationwide, Attorney General William Barr said he wanted prosecutors to be aggressive in charging demonstrators who cause violence. (AP Photo/Mike Balsamo, File)
ADVERTISEMENT