With Wilfred, scientists move to Alpha in Greek alphabet by ANGIE WANG AND JAY REEVES THE ASSOCIATED PRESS | September 19, 2020 at 4:34 a.m. 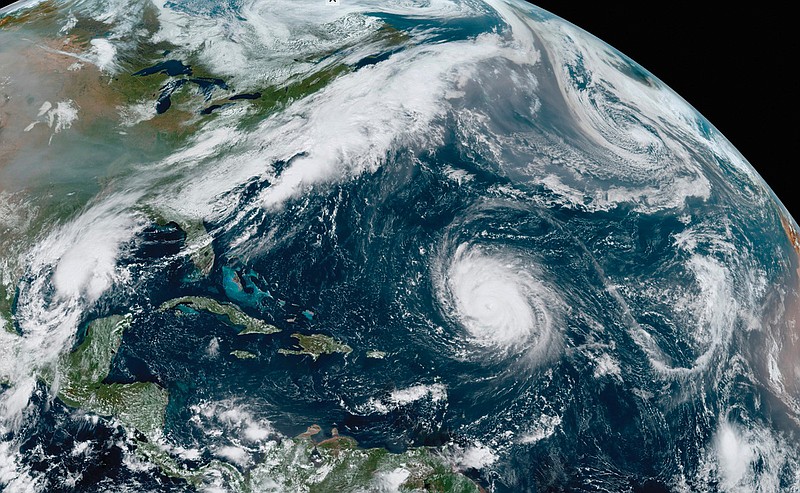 LOXLEY, Ala. -- The supercharged Atlantic hurricane season has produced so many named storms that scientists ran out of traditional names Friday as Tropical Storm Wilfred developed in the eastern Atlantic. It was only the second time this has happened since forecasters standardized the naming system in 1953.

Two hours after Wilfred took shape, the National Hurricane Center moved to the Greek alphabet when Subtropical Storm Alpha formed just off the coast of Portugal. Next up is Beta and so on for the rest of the hurricane season, which lasts until the end of November.

Forecasters are watching at least two other systems, including one that is a tropical depression in the western Gulf of Mexico.

The only time the hurricane center dipped into the Greek alphabet was the deadly 2005 hurricane season, which included Hurricane Katrina's strike on New Orleans. The previous record for the earliest 21st named storm was Wilma on Oct. 8, 2005, according to Colorado State University hurricane researcher Phil Klotzbach.

Meanwhile, hundreds of thousands of people were still without power Friday along the Alabama coast and the Florida Panhandle in the aftermath of Hurricane Sally as officials assessed millions of dollars in damage that included a broken bridge in Pensacola and ships thrown onto land.

[Video not showing up above? Click here to view » https://www.youtube.com/watch?v=f7FU4y2T-mQ]

In Loxley, Ala., Catherine Williams lost power and some of her roof to Sally. The storm also destroyed three pecan trees in her yard that she used to make ends meet.

"There's no food, no money. I took my last heart pill today," said Williams, who has been laid off twice from her job as a cook because of the economic problems caused by covid-19. She hoped that the Red Cross would soon show up at her home.

Two people in Alabama were reported killed -- a drowning and a death during the cleanup in Baldwin County. In Florida, authorities were looking for a missing kayaker who was feared dead in Escambia County.

In Pensacola, Mamie Patterson was cleaning the yard of her cousin who was recovering from heart surgery after they lost power in a low-income neighborhood in Pensacola.

Patterson's mother uses an oxygen machine that they took to an uncle's home to charge because he had electricity. She saw utility trucks all over the city and wondered when power would be restored in her neighborhood, where several inches of water were standing in streets more than 48 hours after the storm.

Elsewhere in the city, Karen Robinson sat on the steps of her first-floor apartment and rattled off a list of belongings ruined by 4 feet of water from Sally -- clothes, shoes, furniture and food.

It took months to recover from a 2015 flood after a heavy rainstorm sent nearly the same amount of water from a creek into the 200-unit complex. She was concerned because more than two months are left in hurricane season.

"This could happen again. That's the problem," Robinson said as men tossed soggy items out of an apartment window nearby.

In Louisiana, about 41,000 people remain without power around Lake Charles, where Hurricane Laura made landfall on Aug. 27. On Oak Island, N.C., which was ground zero for Hurricane Isaias on Aug. 3, some rental homes finally reopened by Labor Day.

"It wasn't pretty. We had piles of sand everywhere, plies of debris everywhere, but the roads were open," Mayor Ken Thomas said.

With the dunes that provide some protection to the island gone, Thomas said people will be nervous for the rest of the storm season.

"There's a hurricane for everyone out there," he said.

Information for this article was contributed by Bobby Caina Calvan, Jeff Martin and Jeffrey Collins of The Associated Press. 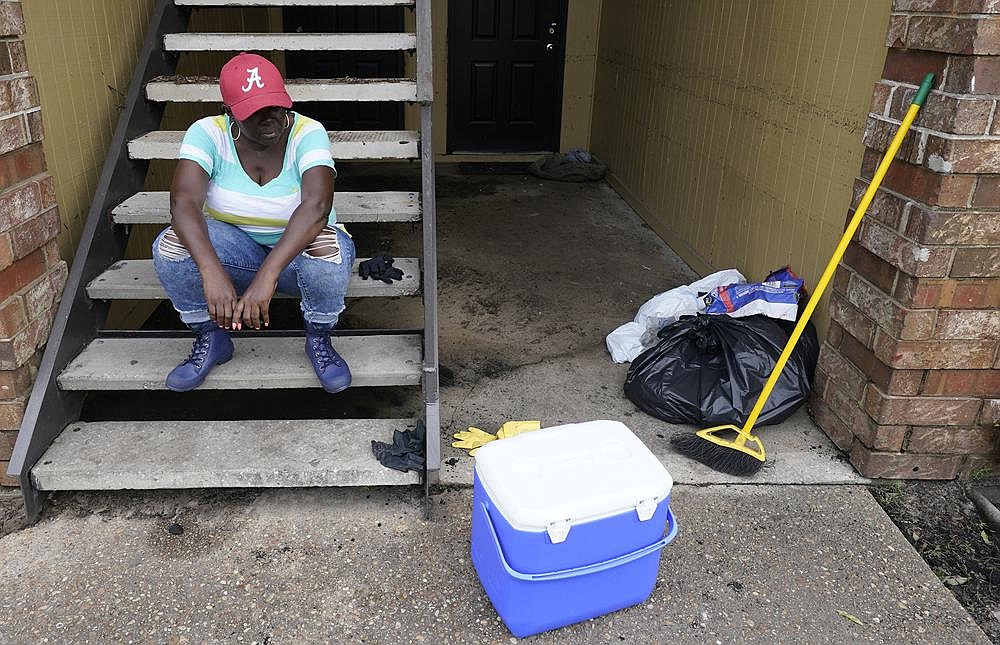 Karen Robinson takes a break from cleaning out her apartment Friday in Pensacola, Fla., after Hurricane Sally doused it with 4 feet of water. Power was out for hundreds of thousands of people in Alabama and Florida. Meanwhile, weather officials turned to the Greek alphabet with new storms brewing after already running through the season’s list of hurricane names. More photos at arkansasonline.com/919sally/. (AP/Gerald Herbert) 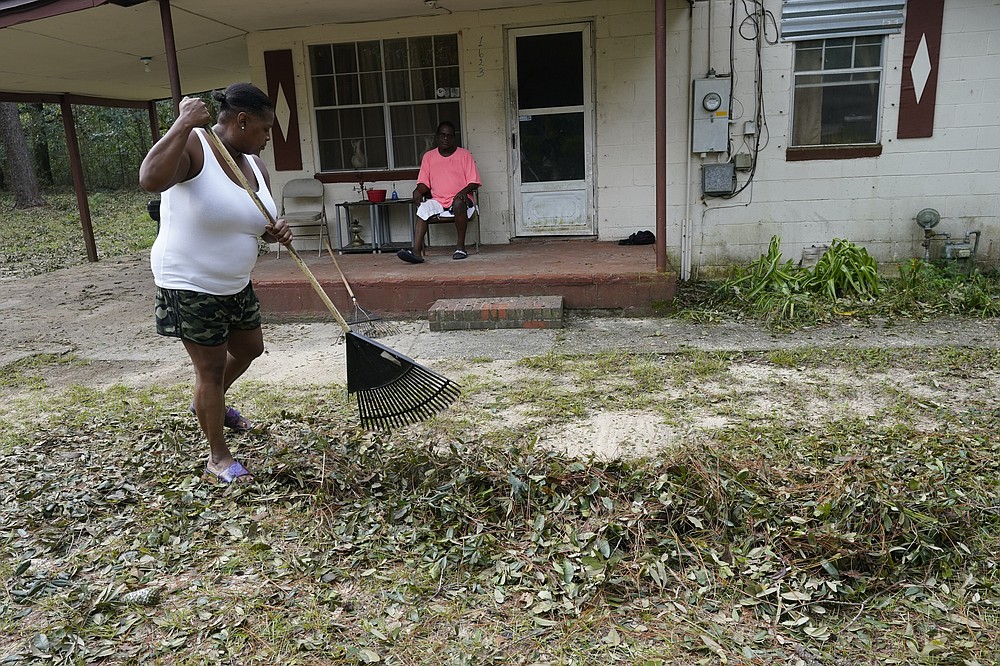 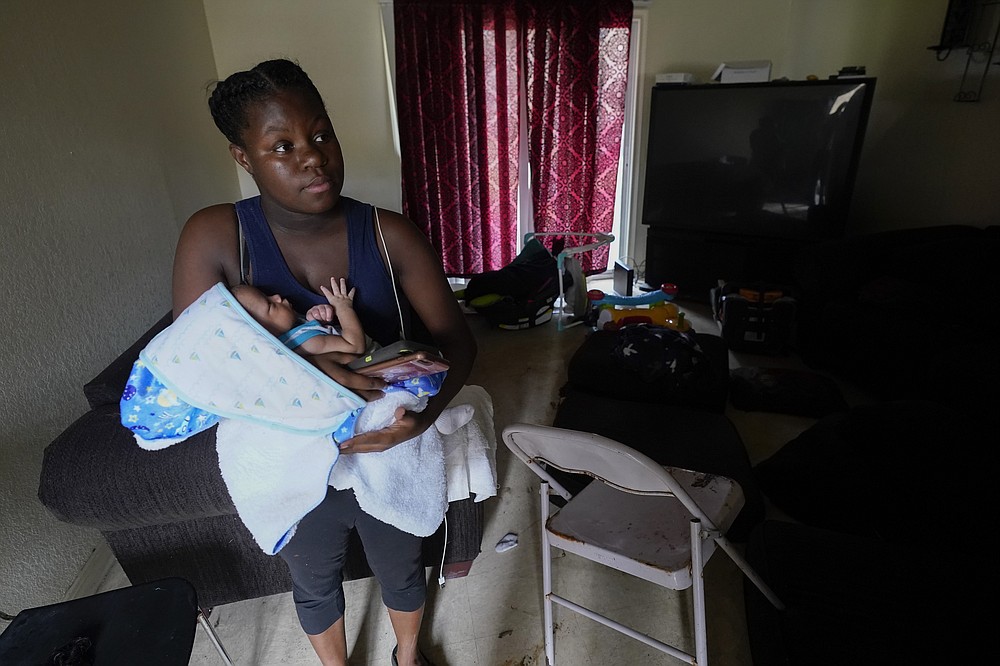 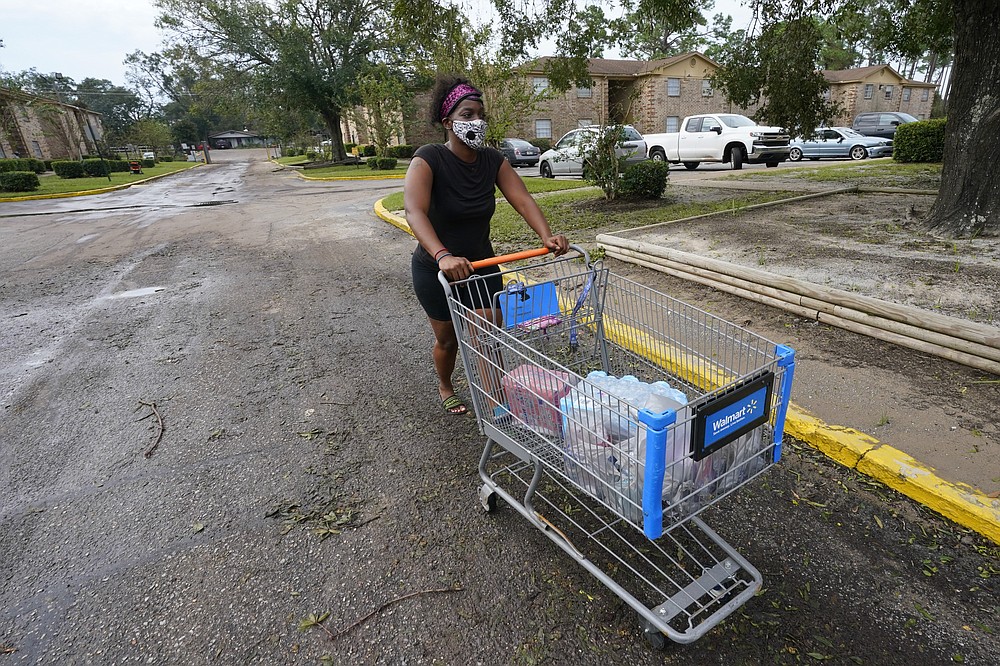 Fanchiskia Gulley moves toward her apartment after purchasing provisions in the aftermath of Hurricane Sally, Friday, Sept. 18, 2020, in Fla. (AP Photo/Gerald Herbert) 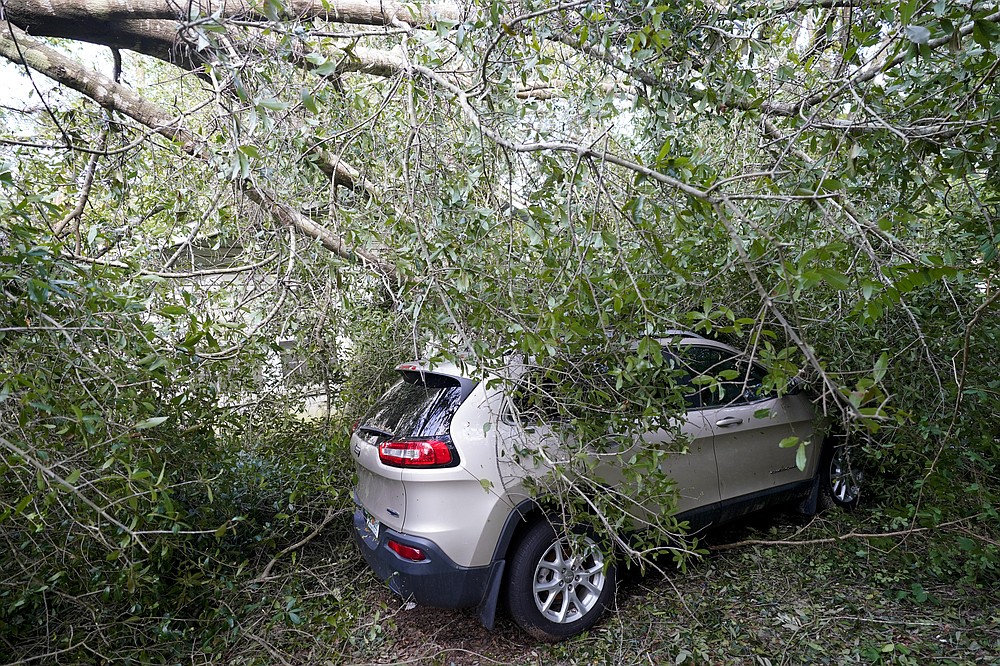 A car is covered in branches in the aftermath of Hurricane Sally, Friday, Sept. 18, 2020, in Pensacola, Fla. (AP Photo/Gerald Herbert) 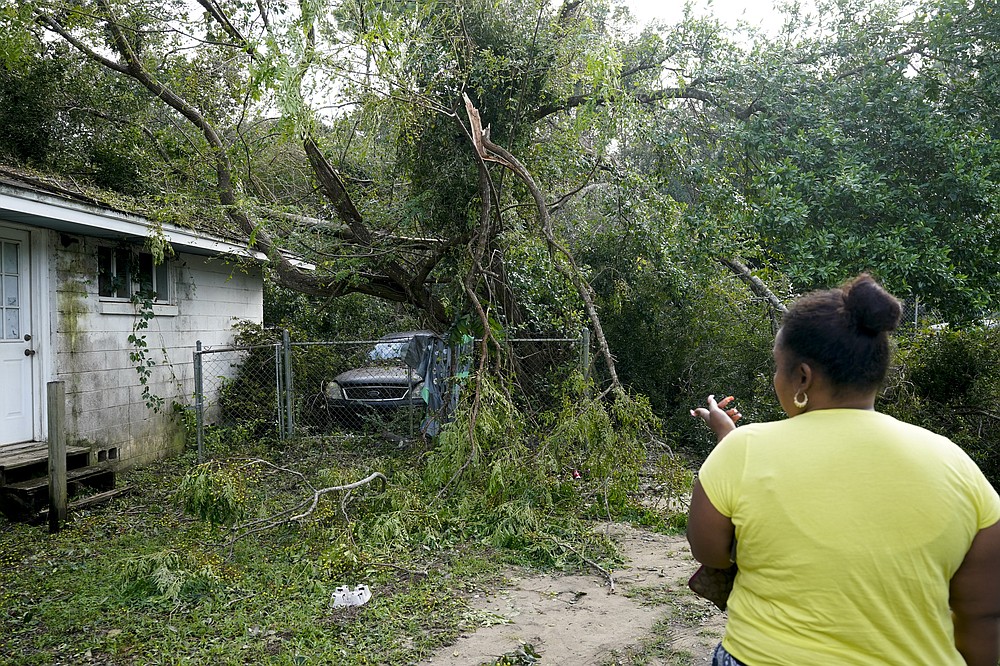 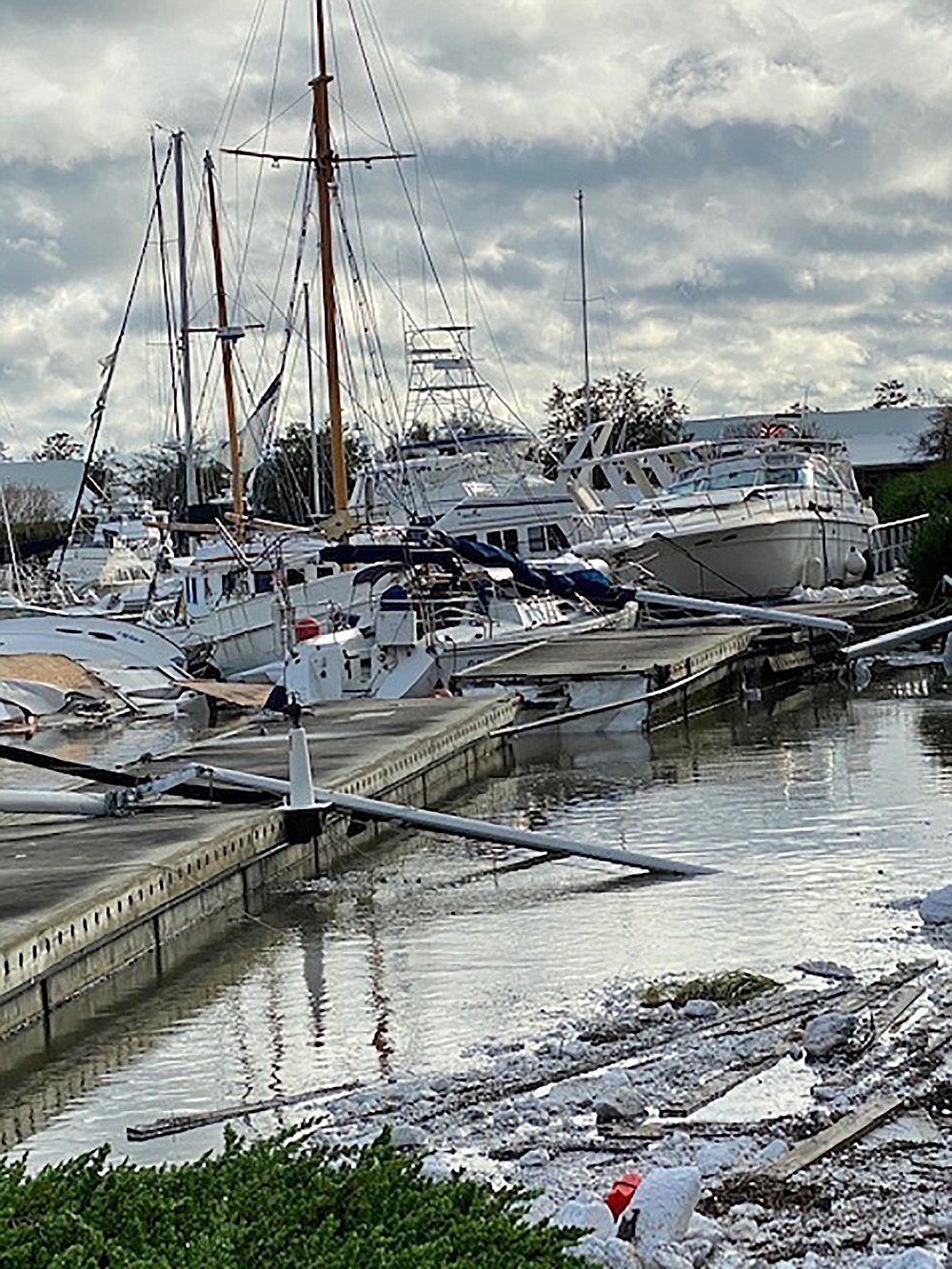 This photo provided by Tina Austin shows damage at the Barber Marina in Elberta, Ala., Wednesday, Sept. 16, 2020, caused by Hurricane Sally. (Tina Austin via AP)
ADVERTISEMENT