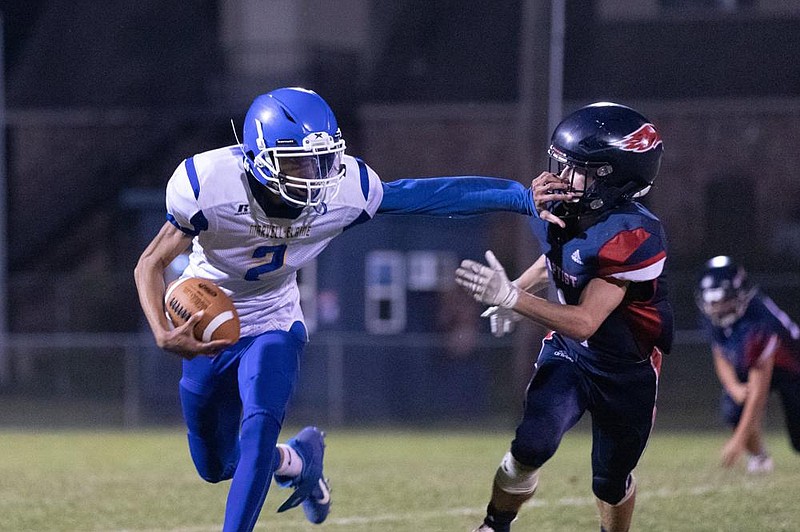 "I told the guys on Thursday, this team is coming with a purpose, and that purpose is to beat you," Welchman said. "And they did. And that's a great job by them."

Marvell, a winner of five football games since 2010, with two of those victories coming last season, beat Baptist Prep 24-20 Friday in Little Rock.

They did it with 17 players and one coach, Galdric Thrower, who was filling in for the team's head coach, Chester Smith, who missed three days of school with an illness.

"I had to step in," Thrower said. "A lot of people look at us on the schedule, they look at our numbers and look at where we are. But like I told the guys, we were going to war with 13 if we had to."

Marvell, 2-6 last season, opened with a 42-6 loss to Palestine-Wheatley, and with Smith taking ill, Welchman said he didn't know for sure if Marvell would even make the trip.

The Mustangs got off the bus with no intention of doing what they have done so often in the past.

"I'm so proud of those kids at Marvell," Welchman said. " Those kids had a choice to make this week, and they chose to play this game. With a purpose, and intensity and they came and got the job done."

Welchman said he knew Smith was sick, and that put the game's status on uncertain ground.

"That's always a possibility when you've got two coaches," Welchman said. "We didn't do what we needed to do to get the job done."

Especially in the first quarter, when Baptist Prep gave the ball up three times in the first 12 minutes -- twice on botched punt snaps in Eagles' territory, and another time when it couldn't cover a ground-hugging Marvell kickoff.

Marvell led 18-6 at halftime and went up 24-6 after taking the second-half kickoff and plodding 60 yards in 14 plays, eating up 8:52 of the third quarter.

Baptist Prep countered with two touchdowns in a two-minute span to cut the lead to 24-20 with 8:03 to play -- on keepers by quarterback Aiden Throneberry.

But the Eagles could not get the ball back.

Marvell, backed up to its 3 after the ensuing kickoff, took time off the clock with quarterback Deandra Arnold picking up first downs three times on third-down runs, and then when finally faced with a punting situation at midfield, Shamarrion Sims was able to get the ball off and draw a roughing-the-kicker penalty to seal the game.

"He would do a quarterback keep around the edge," Welchman said of Arnold. "They would have three or four blockers in front. We just didn't flow like we should have. That's what it really comes down to. He's a really good athlete and we didn't make the play when we needed to make the play."

Thrower said he decided at halftime to keep the ball in the hands of Arnold.

"He's been playing that position from Pee-Wee," Thrower said. "He just can read and react. I just sent the plays in and he performed well. ... We just kept the ball on the ground, ate up the clock and picked up first downs."

Welchman said he was proud of the way the Eagles responded, especially after an interminable first half, when the teams combined for 17 penalties and seven turnovers.

"It was more about our attitude and our effort in the beginning," Welchman said. "We had to overcome adversity. You're down 24-6. I'm really proud of our defense. We finished well, we finished hard. We were on pace to get something done at the end of the game."

"I know it's a loss, but we're going to build on this and get better." 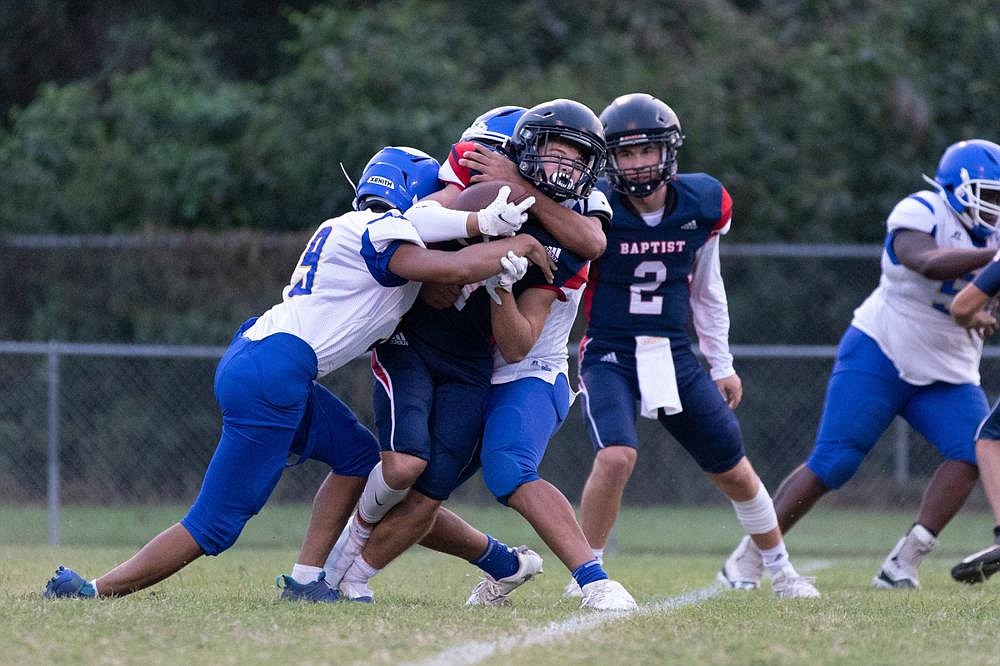 Baptist Prep running back Hayden Brent (center) is tackled by Marvell’s Tramacious Boose (left) and J’Shawn Johnson during Friday night’s game in Little Rock. It was Marvell’s first victory of the season and its fifth since 2010. More photos available at at arkansasonline.com/919marvell. (Arkansas Democrat-Gazette/Justin Cunningham)
ADVERTISEMENT