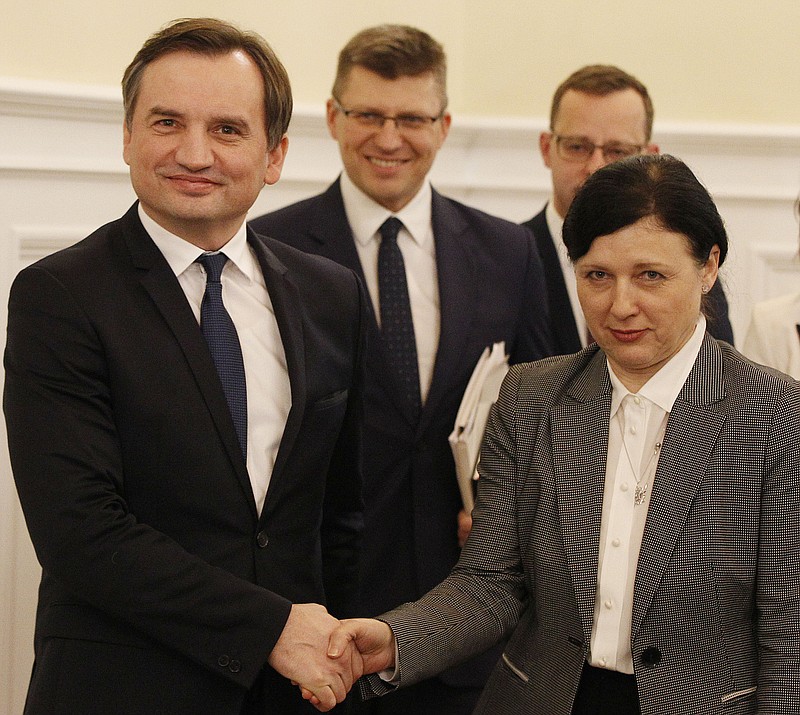 FILE - In this Jan. 28, 2020 file photo, Poland's Justice Minister Zbigniew Ziobro, left, welcomes vice president of the European Commission Vera Jourova, for talks on the conflict over the government's much-criticized taking of steps to control the judiciary in Warsaw, Poland. An official with Poland's conservative governing party, which has been governing with the support of two small parties, one led by the justice minister Ziobro, said Friday, Sept. 18, 2020, that the the country's right-wing coalition government has collapsed. (AP Photo/Czarek Sokolowski, file)

An official with Poland's conservative governing party said Friday that the country's right-wing government coalition has collapsed, but other politicians talked of only a serious crisis.

Marek Suski, a top lawmaker, said the Law and Justice party would continue to run Poland as a minority government, without the two junior partners that were part of the coalition dubbed the United Right.

"The coalition at the moment does not exist," Suski said. "Our former coalition partners should be packing up their desks."

But other coalition politicians used less definitive language, and Suski's statement came to be seen as a tactical power play as a sudden governing crisis deepens.

Lawmakers from one of the junior partners insisted that they were loyal partners and that the coalition still existed. They said government failure would benefit only the opposition.

The chief coalition force sounded a warning, however.

"Let us not prejudge because various things are possible in politics. A lot can still happen, but at the moment the situation is such that the coalition practically does not exist," said Ryszard Terlecki, the Law and Justice party leader in parliament.

Terlecki said party leaders would meet Monday to discuss their next steps and that an early election could not be ruled out if the disagreements continue and a potential minority government proves unable to pass legislation. However, in 2007 early elections that it called, Law and Justice lost the power it was holding.

In its second turn in power now, Law and Justice has been governing with the support of two small parties, one led by the justice minister, Zbigniew Ziobro, since 2015. In last year's parliamentary election, the two partners strengthened their share of the seats held by the coalition.

The announcement Friday morning came after Ziobro and members of his United Poland party voted against an animal welfare bill proposed by powerful Law and Justice leader Jarosław Kaczynski.

Kaczynski, 71, is a lawmaker in parliament and has no official government role, but he is widely understood to be Poland's dominating political force, deciding government policies and appointments.

Opposition votes contributed to the provisions of the proposed bill approved by the lower house of parliament, or Sejm, which included the prohibition of breeding fur animals and limitations on ritual slaughter.

Suski said it was important to not accept cruelty to animals, and someone who accepted it "should not be the justice minister."

The comment directed at Ziobro prompted speculation of him leaving the government.

Deputy Justice Minister Michal Wojcik, a member of Ziobro's party, said anyone trying to trigger Ziobro's departure from the government "would be making a gift" to the opposition Civic Platform party, paving a way for its return to power.

He recalled years of loyal partnership in the coalition but also his party's right to criticize legislation that it saw as harmful.

The animal wellness law has drawn vehement protests from farmers, so far the main voter base for the governing coalition, which still has three years of its term ahead.

Kaczynski appears to be trying to reposition his party to gain wider public appeal after parliamentary elections last year and this summer's presidential vote showed that Law and Justice remained Poland's most popular party but without overwhelming support in the country's deeply divided society.

The party's presidential candidate, Andrzej Duda, won reelection in July, but only barely, with 51%, and thanks to strong support from older rural voters. Young Poles tend to support either socially liberal or far-right parties, which poses a problem for Law and Justice's future rule.

There is also an ideological struggle within the coalition ranks that pits hard-liners like Ziobro against relatively more moderate conservatives, like Prime Minister Mateusz Morawiecki, who has Kaczynski's backing.

The strains broke into the open this week as Kaczynski led talks on reshuffling and trimming the government for the stated purpose of efficiency.

The deeper rift appears to be related to a struggle for power within the ruling camp as leading figures like Ziobro and Morawiecki position themselves for a time when Kaczynski will no longer be the dominating force on the political right. 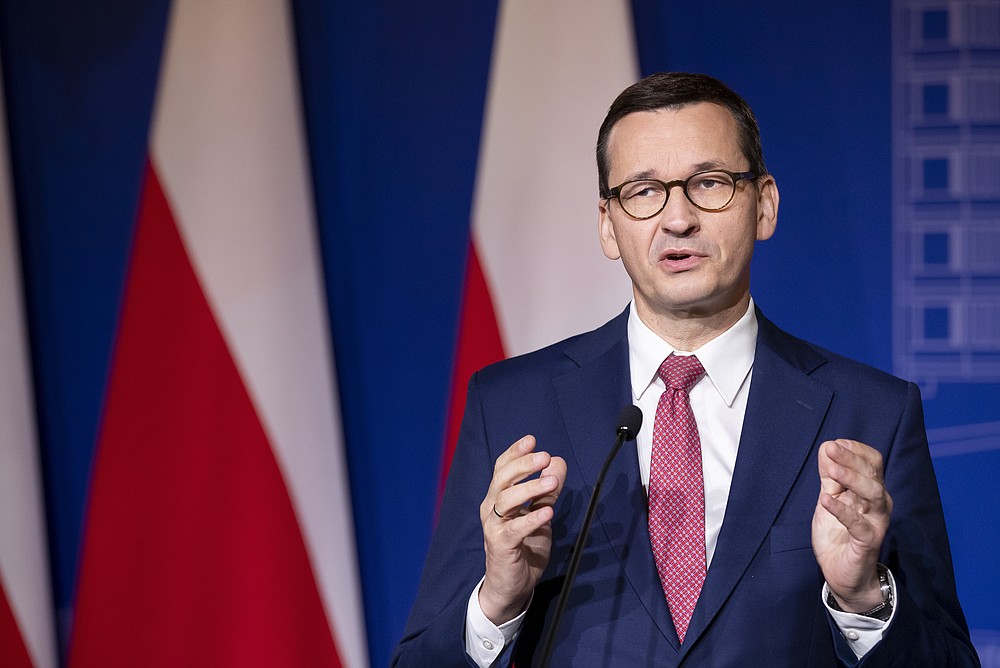 FILE - In this Sept. 17, 2020 file photo, Poland's Prime Minister Mateusz Morawiecki speaks during a news conference following joint meetings of the government of the Lithuania and the government of the Poland at the Palace of the Grand Dukes of Lithuania in Vilnius, Lithuania. An official with Poland's conservative governing party said Friday, Sept. 18, 2020, that the the country's right-wing coalition government has collapsed. (AP Photo/Mindaugas Kulbis, file) 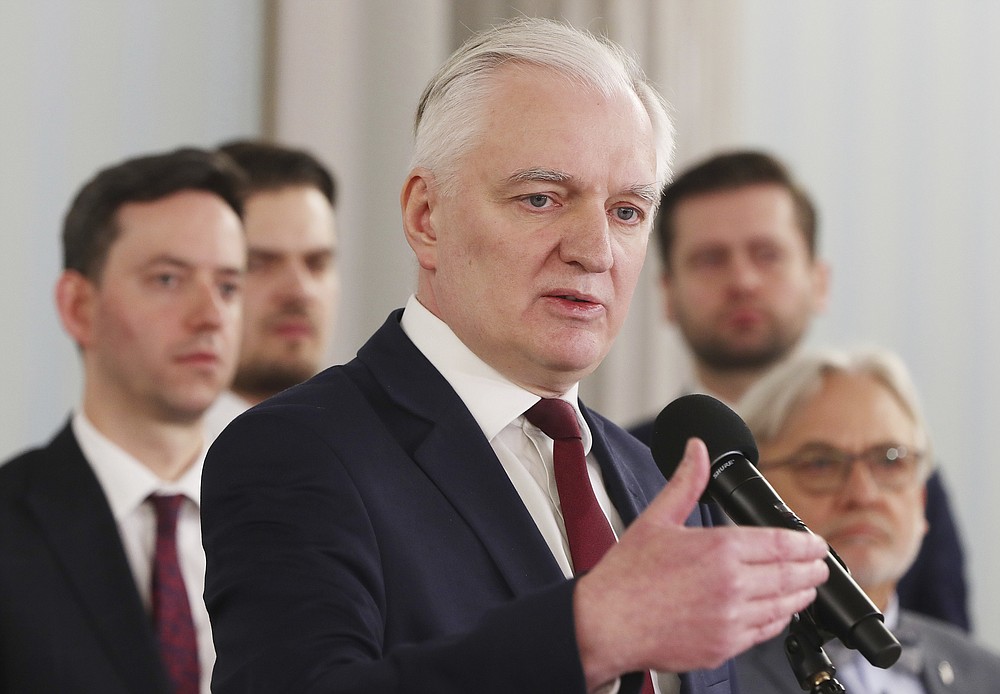 FILE - In this April 6, 2020 file photo, deputy prime minister Jaroslaw Gowin, center, announces to reporters that he has resigned from his government position in Warsaw, Poland. An official with Poland's conservative governing party said Friday, Sept. 18, 2020, that the the country's right-wing coalition government has collapsed. (AP Photo/Czarek Sokolowski, file) 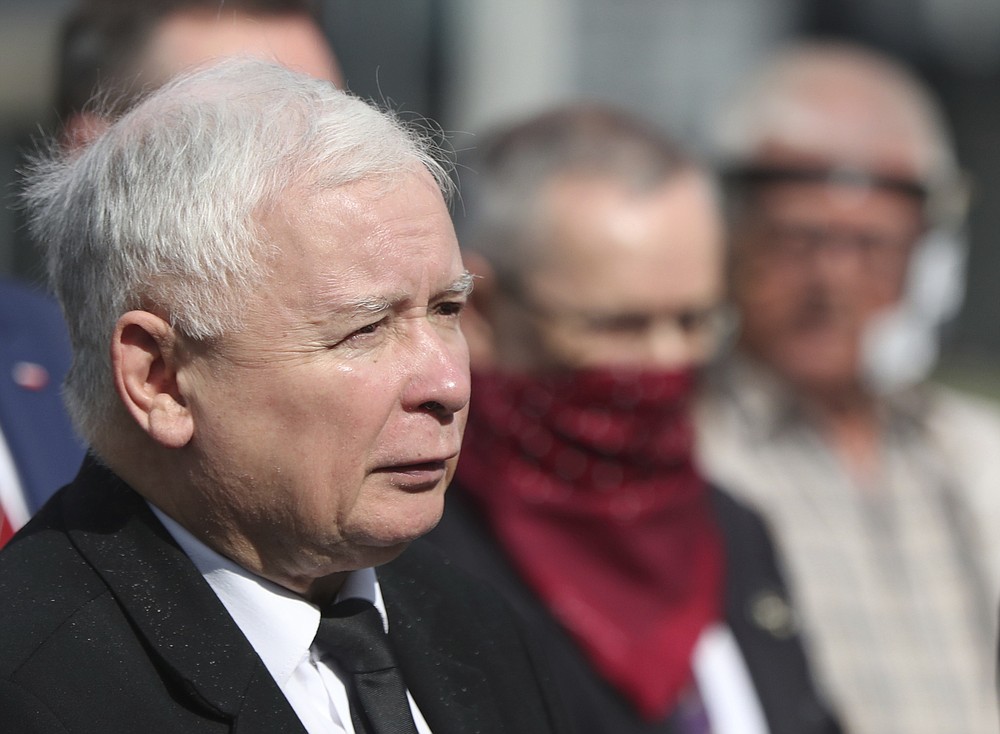