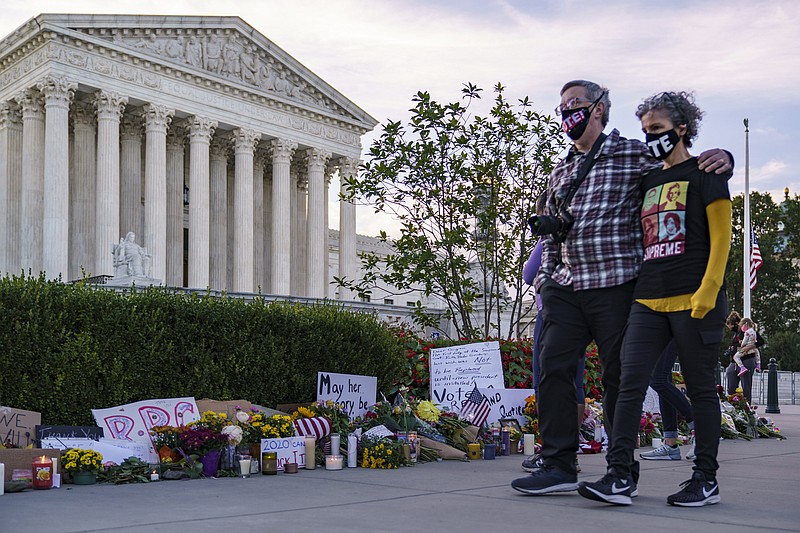 People gather at the Supreme Court on the morning after the death of Justice Ruth Bader Ginsburg, 87, one of the high court's liberal justices, and a champion of gender equality, in Washington, Saturday, Sept. 19, 2020. (AP Photo/J. Scott Applewhite)

WASHINGTON -- As the sun rose behind the Supreme Court on Saturday, dozens of mourners stood in silence near a flag flying at half-staff. People had started arriving the night before, leaving flowers, candles and homemade signs to honor Justice Ruth Bader Ginsburg.

Also Saturday, current and former Supreme Court justices spoke about their colleague, praising her intellect, her devotion and her fortitude.

Mourners by the hundreds kept arriving throughout the day. Mothers appeared with their daughters to pay tribute to the pioneering liberal lawyer and advocate for equality who died Friday.

"I wanted to be a lawyer but wasn't sure I could do it," said Blake Rogers, 13. "And then I heard Justice Ginsburg speak, and she showed me that I could do it, that women and girls can do anything."

Beth Feliciano, 39, squatted next to her 2-year-old daughter, Ellie, holding a book titled "I look up to ... Ruth Bader Ginsburg." She pointed to the court building and told Ellie, whom she had once dressed as Ginsburg for Halloween, that the late justice had worked there.

"We have been talking about Ruth ever since Ellie was born," the graduate student said. "She's someone good for Ellie to look up to as a superhero."

Friday night, hundreds of people showed up outside the court building after hearing of Ginsburg's death. They wept and sang in a candlelight vigil, packing the high court's steps in a spontaneous memorial.

Scores of candles flickered in the nighttime wind as people knelt to leave flowers, American flags and handwritten condolence messages for Ginsburg, who died of metastatic pancreatic cancer at age 87 after 27 years on the court. Prayer candles with Ginsburg's photo on them were also left on the steps.

Several times, people in the crowd broke out into song, singing "Amazing Grace" and "This Land is Your Land" as others embraced one another and wiped tears from their eyes. At one point, the crowd broke into thunderous applause -- lasting for about a minute -- for Ginsburg.

"Thank you RBG," one sign read. On the sidewalk, "RBG" was drawn inside a pink chalk heart.

By late Friday night, the crowd had swelled to at least 1,000, with more streaming in to pay their respects. The mourners were of all ages, including baby boomers and millennials.

Elizabeth LaBerge wrapped her arms around her fiance, Will Sullivan, laid her head on his shoulder and quietly sobbed.

The Capitol Hill lawyer arrived at the court plaza filled with fear for the future of the nation as Ginsburg's death represents another loss from the ranks of people who have made "serious law and order a mission of their lives."

"I was telling my fiance, the question that keeps popping up in my head is, 'Who is going to take care of us?'" LaBerge, 36, said in an interview. "It just feels like such a deep loss at this particular time. It's a lot to put on a woman of her age to keep us safe and functioning as a constitutional democracy."

"I'm very grateful, and sad for the loss and worried for my country," she said.

The steps of the court, where people gathered Friday night, were blocked off Saturday, and those who arrived to pay their respects instead placed bouquets and signs in front of the fencing and left chalk messages on the pavement. One read "thank you is never enough ... VOTE."

U.S. Sen. Kamala Harris of California, the Democratic nominee for vice president, was among the mourners, showing up in a hoodie to offer respects with her husband.

"I disagree with everything she stood for, but she was a strong, stable, very professional justice," said Paul Joseph, a 60-year-old pastor wearing a Trump 2020 mask. "That's a big loss."

Jennifer Berger, 37, said she felt compelled to join the crowd.

"I think it is important for us to recognize such a trailblazer," she said. "It is amazing to see how many people are feeling this loss tonight and saying goodbye."

Ginsburg spent her final years on the bench as the unquestioned leader of the court's liberal wing.

The memorial stayed mostly peaceful and somber, but turned tense for several minutes after a man with a megaphone approached people in the crowd and began to chant that "Roe v. Wade is dead," a reference to the landmark Supreme Court ruling establishing abortion rights nationwide.

A large group confronted the man, leading to a brief shouting match. Many in the crowd began yelling "RBG" to drown out the man's voice. Supreme Court police officers stood alongside the crowd, and the man eventually left.

Shortly before 11 a.m., two dozen people gathered in front of the court to say the Mourner's Kaddish's, a Jewish prayer traditionally spoken during times of bereavement. Ginsburg, the longest-serving Jewish justice, died at the start of Rosh Hashanah.

[Video not showing up above? Click here to view » https://www.youtube.com/watch?v=ybMY2XVkDFY]

Those in the group put brown and tan stones, traditionally placed on graves, alongside the flowers and candles as they sang and prayed.

Some of the high court justices -- like Clarence Thomas and Stephen Breyer -- served with her for nearly all of her 27 years on the high court, and wrote emotional statements after news of her death.

Chief Justice John Roberts wrote: "Our Nation has lost a jurist of historic stature. We at the Supreme Court have lost a cherished colleague. Today we mourn, but with confidence that future generations will remember Ruth Bader Ginsburg as we knew her -- a tireless and resolute champion of justice."

Justice Clarence Thomas wrote that he was heartbroken to learn of her passing. "Through the many challenges both professionally and personally, she was the essence of grace, civility and dignity. She was a superb judge who gave her best and exacted the best from each of us, whether in agreement or disagreement. And, as outstanding as she was as a judge, she was an even better colleague -- unfailingly gracious, thoughtful and civil."

Justice Stephen Breyer wrote that he heard of her death while he was reciting the "Mourner's Kaddish" at a Rosh Hashanah service. "I thought: a great Justice; a woman of valour; a rock of righteousness; and my good, good friend. The world is a better place for her having lived in it."

Justice Samuel Alito wrote that he and his wife were deeply saddened. "Ruth and Marty made us feel at home immediately when I joined the Court, and we will certainly miss her. Justice Ginsburg will go down as a leading figure in the history of the Court. She will be remembered for her intelligence, learning, and remarkable fortitude. She has been and will continue to be an inspiration for many. "

Justice Sonia Sotomayor called her a dear friend and colleague, and "an American hero" who spent her life "fighting for the equality of all people, and she was a pathbreaking champion of women's rights."

"I will miss Ruth greatly," Sotomayor wrote. "She welcomed me to the Court with a warmth I could not have expected, and I came to feel a special kinship with her. She was someone whose wisdom, kindness, and unwavering support I could always rely on. I will forever cherish the moments we shared."

"Ruth reached out to encourage and assist me in my career, as she did for so many others, long before I came to the Supreme Court," Kagan said. "And she guided and inspired me, on matters large and small, once I became her colleague. I will miss her -- her intellect, her generosity, her sly wit, her manifest integrity, and her endless capacity for work -- for the rest of my life."

Justice Neil Gorsuch wrote that he and his wife had lost a cherished friend and colleague who was a distinguished judge.

"We are blessed by the happy memories that will remain, like traveling with Ruth to London where [to her delight] an uninformed guide kept calling her 'Ruthie,' or all the opera she tried so valiantly to teach me, or her sweet tooth at lunch, or the touching stories of her remarkable life with Marty. We will miss Ruth and our hearts go out to her family. May she rest in peace."

Justice Brett M. Kavanaugh wrote that no American had ever done more than Ginsburg to ensure equal justice under the law for women.

"A meticulous and pathmarking judge, she held herself to the highest standards of precision and accuracy in her beautifully crafted opinions. And she inspired all of us to try to meet those same exacting standards. I learned from her principled voice and marveled at her wonderful wit at our weekly conferences and daily lunches. Justice Ginsburg paved the way for women to become lawyers and judges."

Retired Justice David Souter wrote that "Ruth Ginsburg was one of the members of the Court who achieved greatness before she became a great justice. I loved her to pieces."

Retired Justice Anthony Kennedy wrote that"the members of the Court always will cherish all that Justice Ginsburg meant to us as a distinguished jurist and an inspiring, wonderful person."

"By her learning she taught devotion to the law. By her dignity she taught respect for others and her love for America. By her reverence for the Constitution, she taught us to preserve it to secure our freedom."

"Our nation mourns the loss of a titan of the law," President Donald Trump said in a statement. "Renowned for her brilliant mind and her powerful dissents at the Supreme Court, Justice Ginsburg demonstrated that one can disagree without being disagreeable toward one's colleagues or different points of view. Her opinions, including well-known decisions regarding the legal equality of women and the disabled, have inspired all Americans."

Former President Bill Clinton, who appointed Ginsburg in 1993 said "she was a magnificent judge and a wonderful person -- a brilliant lawyer with a caring heart, common sense, fierce devotion to fairness and equality, and boundless courage in the face of her own adversity." "There will never be another like her," added Hillary Clinton, the 2016 Democratic presidential candidate. "Thank you RBG."

Former President Barack Obama wrote a lengthy Medium post on Ginsburg, saying that she "inspired the generations who followed her, from the tiniest trick-or-treaters to law students burning the midnight oil, to the most powerful leaders in the land."

U.S. Sen. Lisa Murkowski, R-Alaska said "Her life's story is a reminder of how far women have come in the fight for equality but there is more to be done. I have the greatest respect for her as a trailblazer among women."

U.S. Rep. Jerrold Nadler, D-N.Y., chairman of the House Judiciary Committee said "she will be remembered for her brilliant mind, her razor sharp wit, and her tenacious and lifelong fight to protect the rights of women in this country."

U.S. Sen. Elizabeth Warren, D-Mass., said "the T-shirts labeled 'RBG' made her notorious. But it was her wit, her tenaciousness and her skill as a jurist that made her an icon."

U.S. Sen. Mitt Romney, R-Utah said "her fight for women's equality inspired women to pursue their dreams without limits, and her grit, character and sharp wit made her an iconic and inspirational jurist beloved by people young and old."

Information for this article was contributed by Michael Balsamo of The Associated Press; by Fenit Nirappil of The Washington Post; and by Ros Krasny of Bloomberg News. 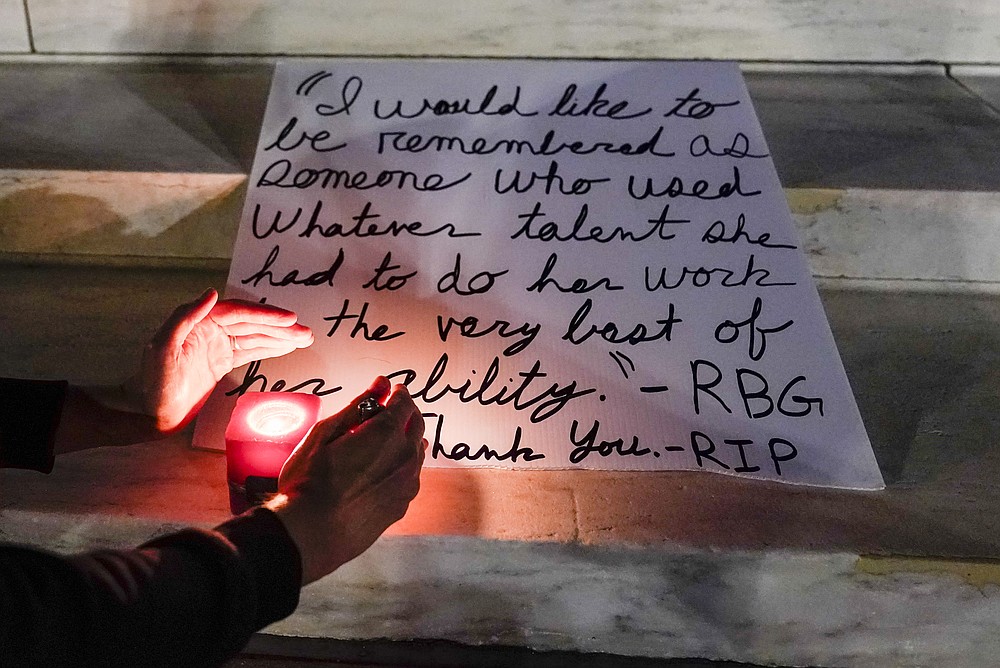 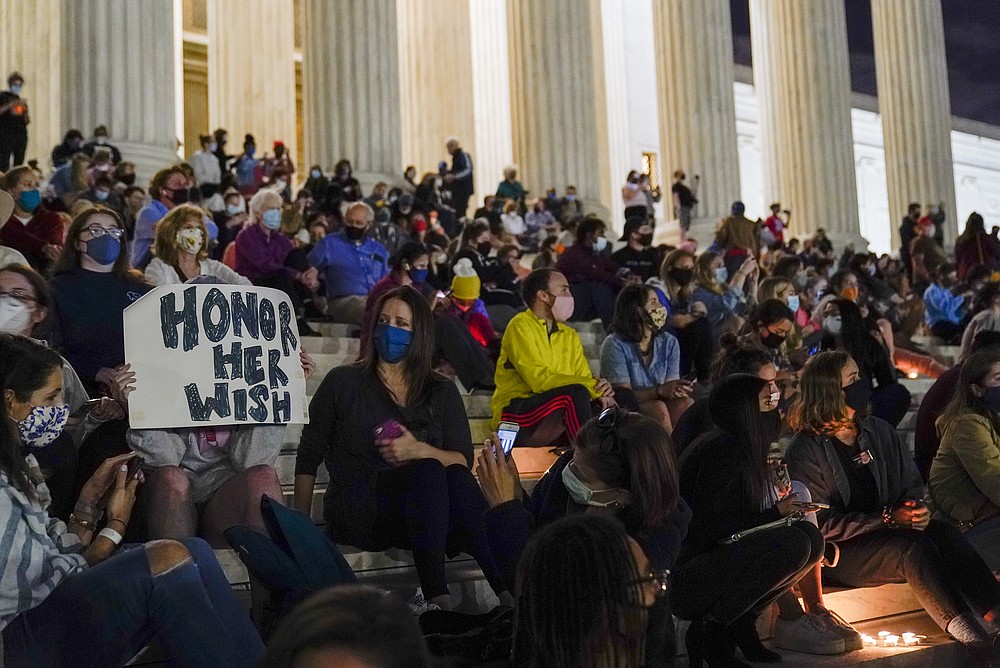 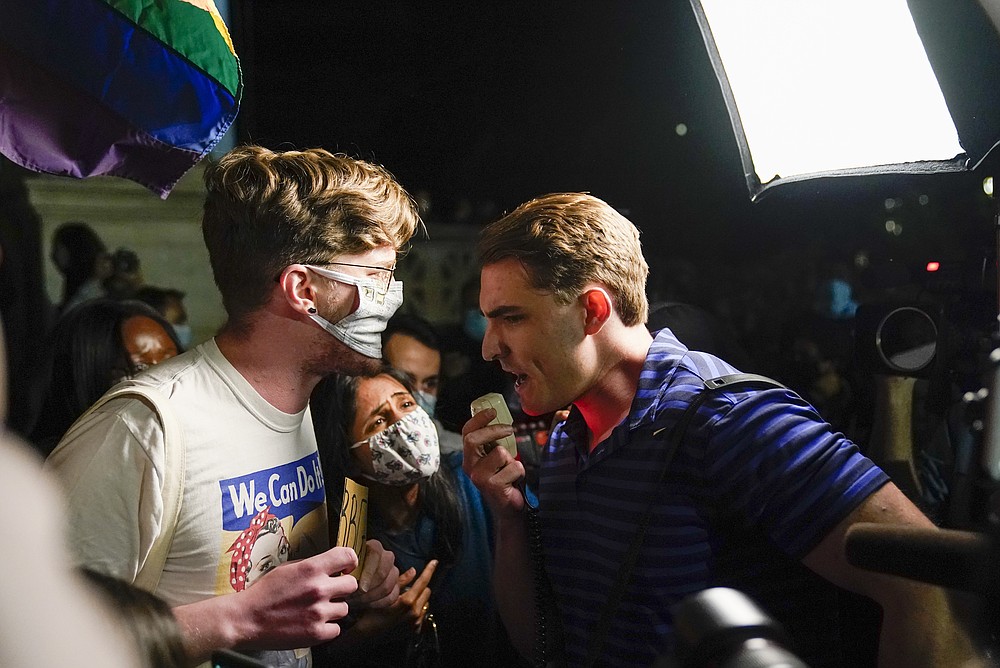 A demonstrator at right argues with people gathered at the Supreme Court to mourn the death of Justice Ruth Bader Ginsburg, Friday, Sept. 18, 2020, in Washington. (AP Photo/Alex Brandon) 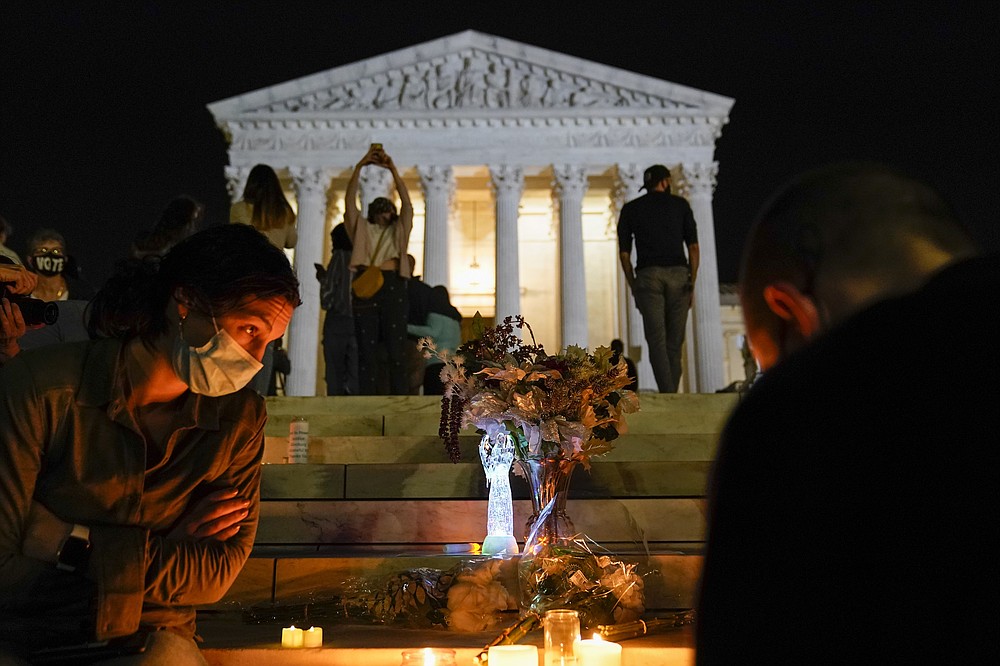 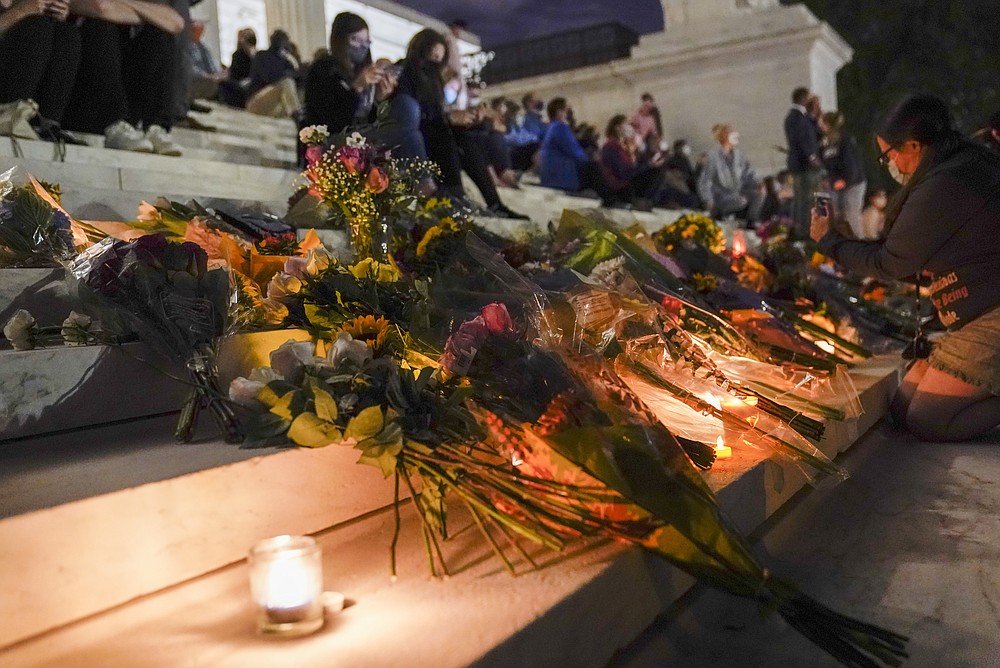