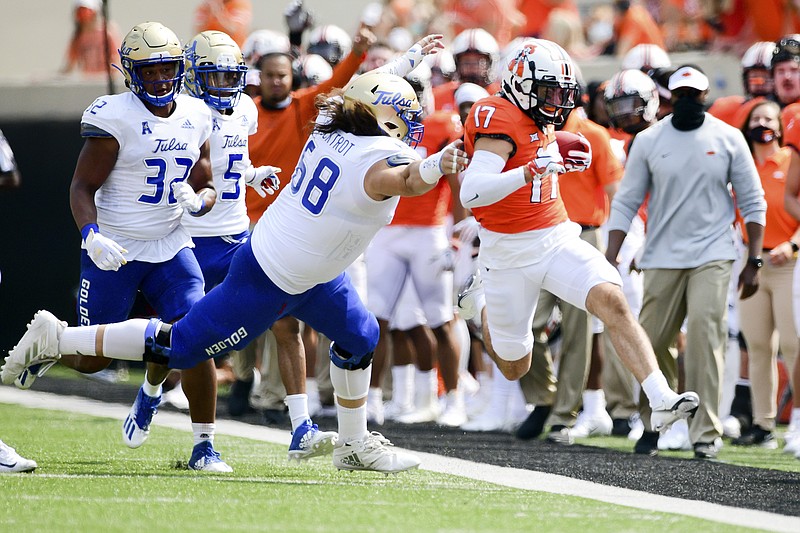 STILLWATER, Okla. -- It wasn't the most impressive performance by No. 11 Oklahoma State, but a third-stringer, true freshman quarterback and Chuba Hubbard rallied the Cowboys to prevent an upset bid on Saturday.

Hubbard, who led the nation in rushing last year, was limited to 35 yards in the first half but scored on a 3-yard run in the fourth quarter to lift Oklahoma State to a 16-7 victory over Tulsa in the season opener for both teams.

Trailing 7-3 late in the third quarter, Oklahoma State (1-0) received a big offensive spark when the Cowboys' third QB, Shane Illingworth, entered the game and immediately connected on his first three passes -- including the two longest plays of the day -- hitting Tylan Wallace for receptions of 36 and 29 yards.

Illingworth completed 4 of 5 passes for 74 yards in just over a quarter of work, helping Wallace finish with 4 receptions for 94 yards. Freshman Alex Hale made three field goals, two in the fourth quarter, from 27, 40 and 29 yards.

"I was proud of our team," Oklahoma State Coach Mike Gundy said. "We got put in a unique situation there for a while, had to regroup, particularly on offense. Defense was fabulous. I'm thrilled with the guys for fighting through all the adversity and finding a way to win at the end."

Tulsa (0-1) will play at Arkansas State University on Saturday.

Lawrence also rushed for his third TD this season, leading the way as the Tigers (2-0) improved to 35-0 against teams from the Football Championship Subdivision.

Book capped the opening drive with 4-yard touchdown run and freshman Chris Tyree scored from a yard out about five minutes later.

CINCINNATI -- Gerrid Doaks scored four touchdowns, including a career-high three on the ground, as Cincinnati opened with a victory over Austin Peay.

ATLANTA -- Dillon Gabriel threw for a career-best 417 yards and four touchdowns to get Central Florida past Georgia Tech (1-1) in the Knights' season opener.

Tre Nixon and Marlon Williams each hauled in a pair of TD passes as Gabriel eclipsed his previous career-high of 365 yards in a game last season at East Carolina.

King threw a 75-yarder touchdown pass to Jaylon Knighton in the third quarter, a series after Cam'ron Harris ran 75 yards for a score.

Miami (2-0, 1-0) led 20-6 at halftime before Louisville (1-1, 0-1) scored twice in a wild third to get within seven. The Hurricanes answered both TDs on their next snap against an out-of-place defense, with Knighton wide open for his catch that made it 34-20. Knighton also had a 3-yard TD run in the first half after King threw a 17-yard scoring pass to Will Mallory.

King also hit Brevin Jordan with a 47-yard TD pass in the fourth to finish with 325 yards on 18-of-30 passing. Jose Borregales added four field goals, including first-half kicks of 48 and 57 yards.

HUNTINGTON, W.Va. -- Brenden Knox rushed for 138 yards and a touchdown, quarterback Grant Wells came up with back-to-back big plays when Marshall needed them and the Thundering Herd beat Appalachian State.

Marshall (2-0) beat a ranked opponent for the first time since winning at No. 6 Kansas State in 2003.

Appalachian State (1-1) was held scoreless in the second half.

Wells, a redshirt freshman, threw a 67-yard pass to a wide open Xavier Gaines to set up Wells' 12-yard scoring run on the next play for a 17-7 lead late in the third quarter.

PITTSBURGH -- Kenny Pickett threw two touchdown passes and ran for another score, and Pittsburgh's defense did the rest against Syracuse.

Person ran for 99 yards and two scores to lead the Wolfpack (1-0, 1-0 ACC). He also threw a jump-pass TD near the goal line in the third quarter.

Jurkovec, the former four-star quarterback who transferred to Boston College from Notre Dame in the offseason, led the Eagles (1-0, 1-0 ACC) to a touchdown on their first drive, only to see the offense sputter.

In the third quarter, Jurkovec completed 6 of 7 passes for 151 yards and both of his touchdowns. The second, a 61-yard strike to Flowers, pushed the Eagles' lead to 23-6.

MURFREESBORO, Tenn. -- Gunnar Watson threw for 248 yards and two touchdowns as Troy opened its season with a victory over Middle Tennessee.

Watson threw both of his touchdown passes to Khalil McClain in the first half, including a 5-yarder with three seconds left before the break to lead 26-7.

MONROE, La. -- Tyler Vitt threw two touchdown passes and ran for another score in the first half to lead Texas State to a victory over Louisiana-Monroe in a Sun Belt Conference opener.

Vitt connected with Jeremiah Haydel on a 32-yard touchdown pass in the first quarter, and a 75-yard score at the end of the second to give Texas State (1-2, 1-0) a 31-14 halftime lead. 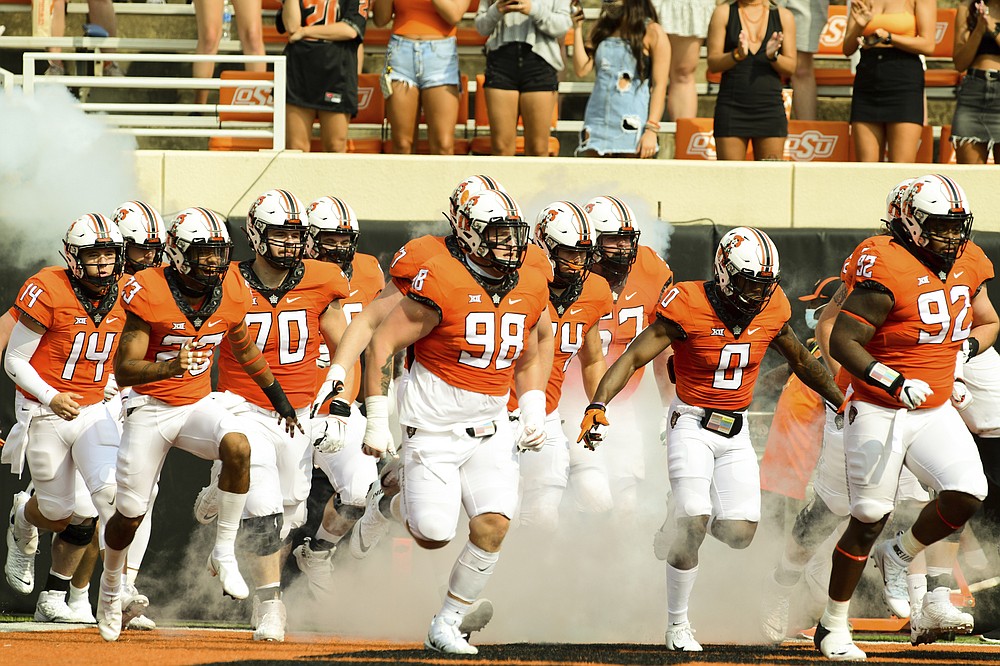 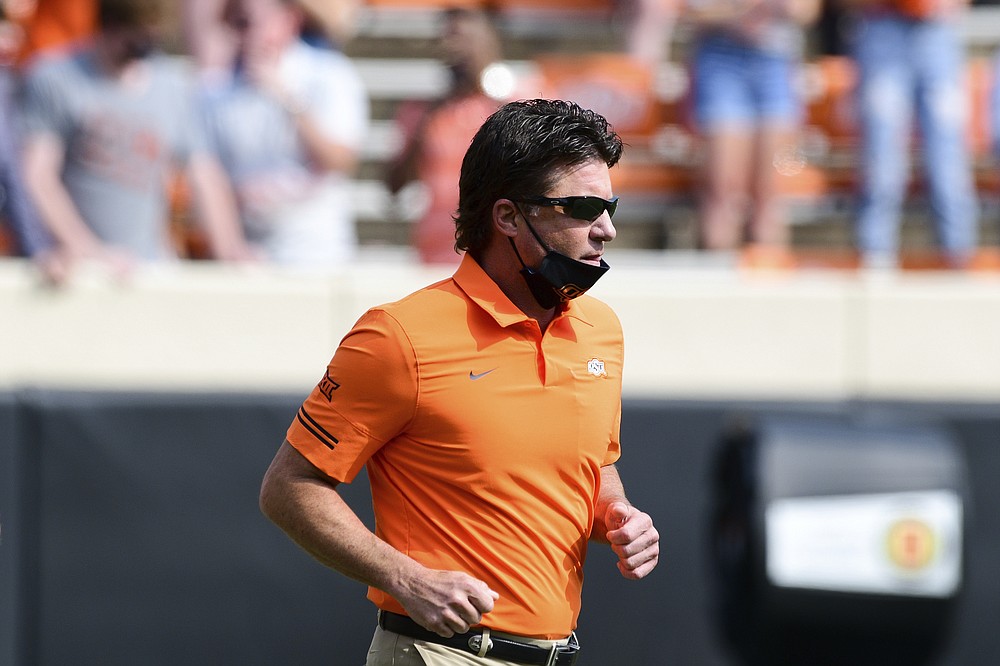 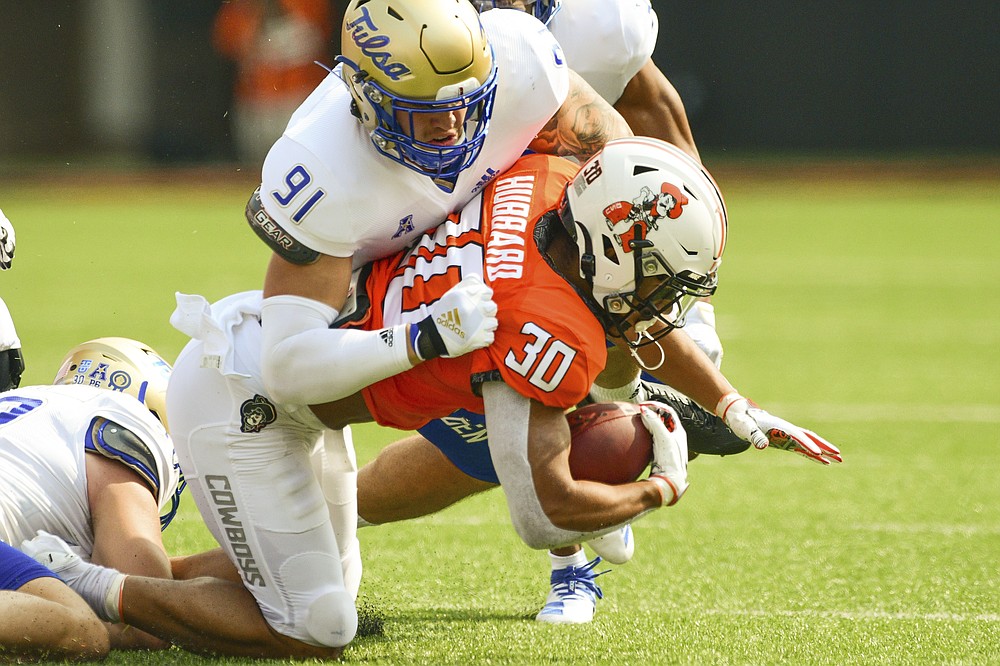 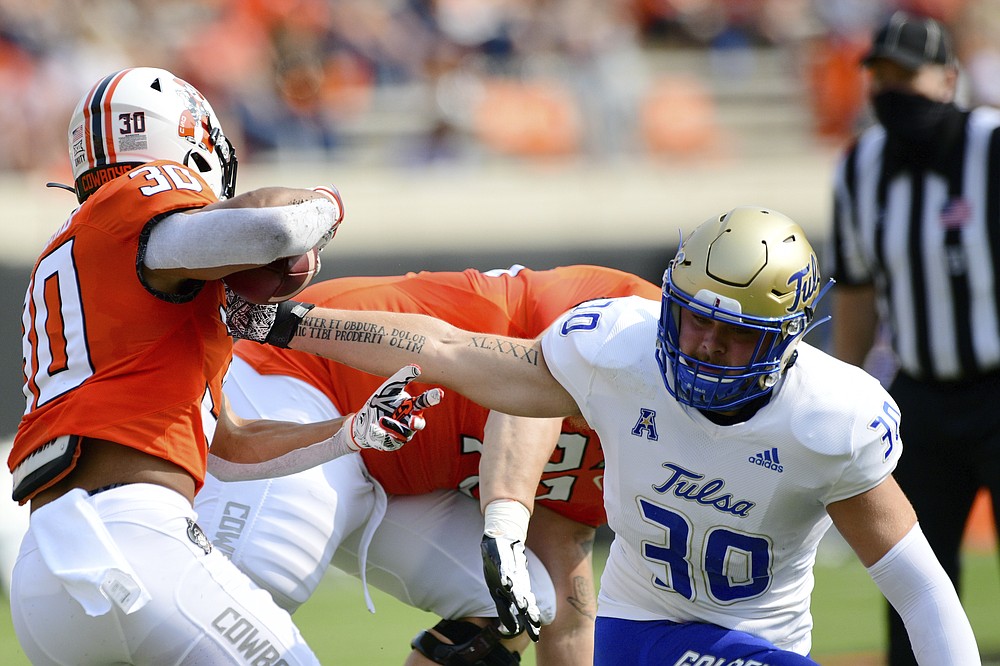 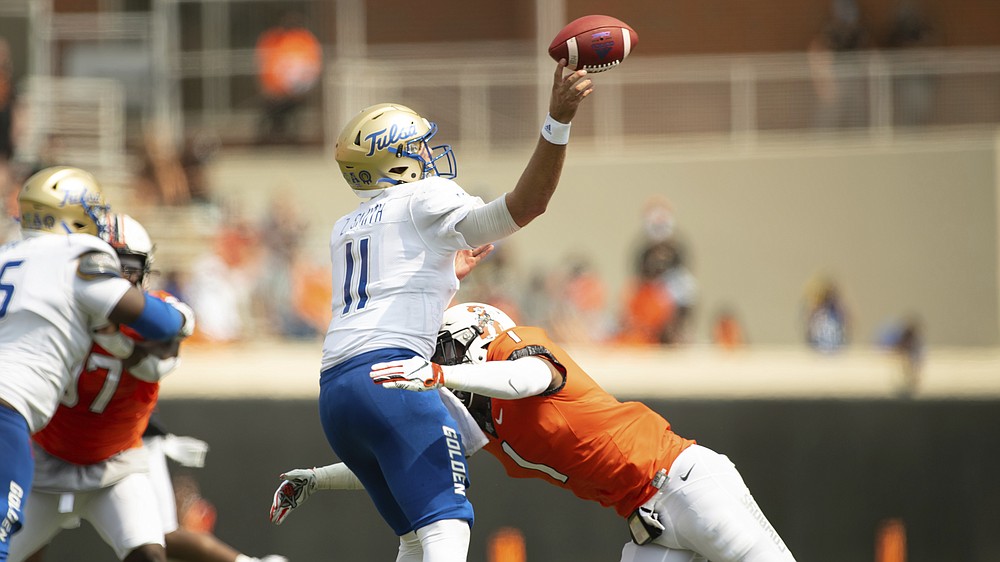 Oklahoma State linebacker Calvin Bundage (1) hits Tulsa quarterback Zach Smith (11) as he gets off a pass in the second half of an NCAA college football game Saturday, Sept. 19, 2020, in Stillwater, Okla. (AP Photo/Brody Schmidt)
ADVERTISEMENT