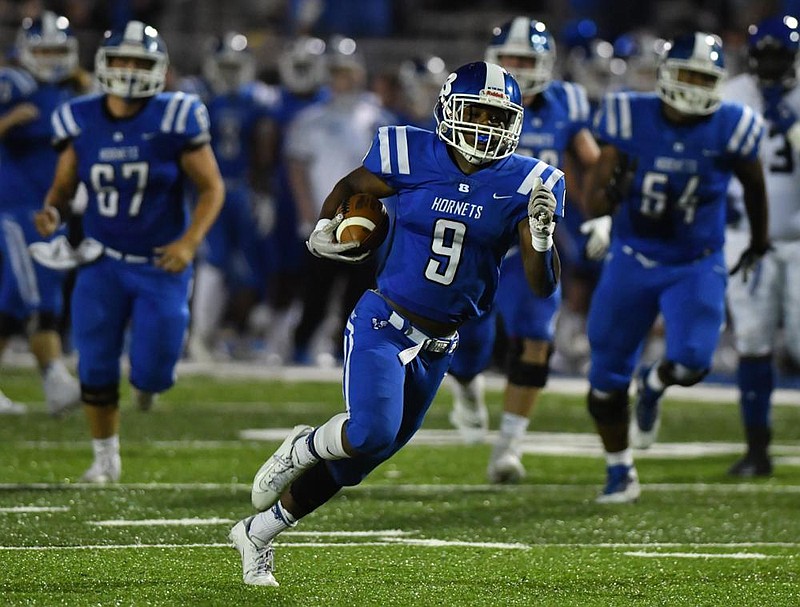 Bryant running back Tanner Anderson (9) runs for a touchdown against Trinity Christian during Friday night's game at Hornet stadium in Bryant. (Special to the Democrat-Gazette/Jimmy Jones)

Last Friday was a good one for Arkansas schools against out-of-state teams.

Pulaski Academy, our No. 4 team overall, defeated Life Christian Academy, which made the long trip from Virginia to play in Little Rock.

No. 5 Greenwood defeated Choctaw, Okla, 23-12, while No. 3 Bentonville posted a 35-28 victory over Mill Valley of Kansas. That team won a state championship last year.

Other wins were Rogers over Springfield Central of Missouri, Fort Smith Northside over Moore of Oklahoma and Prairie Grove over Stilwell of Oklahoma.

The lone loss was Shiloh Christian, and that was a one-point defeat at the hands of a much larger school, Sand Springs of Oklahoma. Still, we dropped Shiloh from No. 1 to No. 2 in Class 4A

Here are the updated rankings as we head into conference play: