Lakers' star has every right to be mad 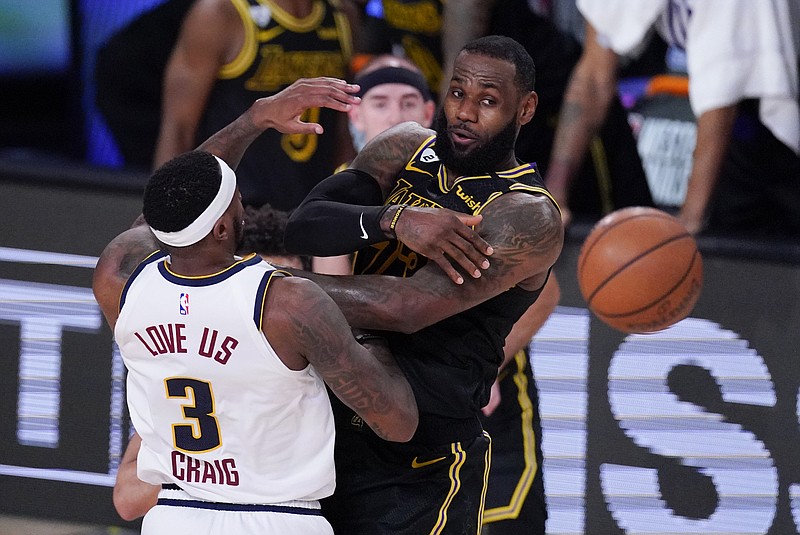 LOS ANGELES -- It's a flagrant foul for unnecessary and excessive dumbness.

How is LeBron James not the NBA's most valuable player?

How could only 16 of 101 writers and broadcasters vote for James as the best player in the league? Sixteen! What were they thinking? What were they watching? It certainly wasn't the Lakers.

When the NBA announced its 2019-20 MVP award Friday, it was clear that voters had dribbled common sense off their feet, thrown fairness into the seats, and just plain bricked it.

The winner for a second consecutive year in a landslide was Milwaukee's stat machine Giannis Antetokounmpo, and this columnist isn't the only one whose jaw dropped.

The award covers only the regular season before the pandemic suspended play, so the argument for James cannot be based on a postseason in which he has carried the Lakers to nine wins in 11 games while Antetokounmpo was falling on his face as his team was blown out by Miami in the second round.

No, this isn't about several weeks in a bubble, this is about six months in real life, but that's where the argument is even stronger. The regular season was a span during which James displayed the greatest leadership of his long career while continuing to play at his highest level.

Antetokounmpo averaged three more points and six more rebounds per game than James for the team with the league's best record, but James played more minutes, led the league in assists, and had a bigger impact on the league's best team.

"To me, he's the MVP of the league this year," said Laker Coach Frank Vogel, who admitted he was also surprised by the voting margin.

Vogel added, "What LeBron does for our team to me is unparalleled, to carry the threat of going for 40 at any point but leading the league in assists and quarterbacking our defense and driving our team to as many wins as we've had and our playoff success, to me he's our MVP."

The L.A. Times does not allow its writers to vote on awards, but, after spending much of his inaugural Laker season criticizing him, this columnist anointed him MVP in March. That so many folks eventually felt so different has James confused.

"I just don't know how much we are really watching the game of basketball or are we just in the narration mode, the narrative," James said.

When the season began, that narrative held that Antetokounmpo was the new face of the league while James, after an embarrassingly desultory and disconnected debut Lakers season, was fading fast.

"They kind of choose the MVP before the season even starts, you know," said Laker Anthony Davis.

Indeed, after the season began, James' extraordinary work in guiding an unsettled franchise back to greatness went largely unnoticed.

James led the team through a new coaching staff. James facilitated his acceptance and eventual empowerment.

James also led the team through a new system featuring new key players in Davis, Danny Green, Dwight Howard and Markieff Morris. Granted, it's a gift to play with a superstar like Davis, but James willingly gave up the ball to his new partners and sacrificed his own numbers for wins. And if becoming a dynamic duo was so easy, how come Kawhi Leonard and Paul George are sitting at home?

James also led the team through tragedy. He was the first player's voice heard by the fans in the wake of Kobe Bryant's tragic death. In late January, James stepped to the Staples Center court before the Lakers' first game after Bryant's passing, picked up a microphone, and bonded a grieving team while speaking for a grieving city.

"The one thing that we always shared was that determination to just always want to win and just want to be great," James told the crowd, referring to Bryant. "I want to continue along with my teammates, to continue his legacy, not only for this year but for as long as we can play the game of basketball that we love because that's what Kobe Bryant would want."

The distressed and distracted Lakers could have crumbled. Instead, they grew stronger, tightened their grip on the top of the Western Conference, and capped the abbreviated end of their normal season with early March wins over Milwaukee and the Clippers. Yeah, in that victory against the Bucks, he outplayed Antetokounmpo.

At the time, James downplayed the MVP race, preferring to focus on a championship for which the Lakers now seem destined. And truly, he doesn't need it for his legacy; he's already won four MVPs.

But he has now finished second four times. He has one fewer than Michael Jordan. And even though he's been the best player in the league for nearly 15 years, he hasn't won an MVP award since 2013.