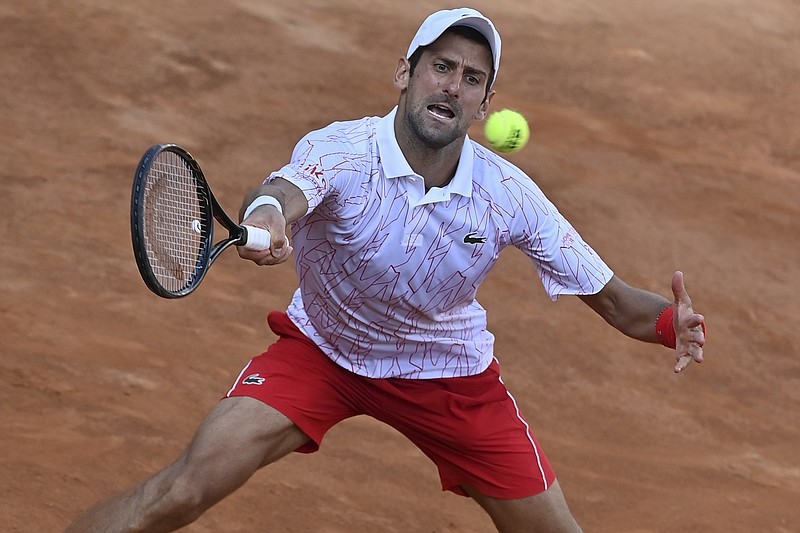 Novak Djokovic knows it isn't model behavior when he loses his cool on the tennis court. Yet he just can't help himself. Exactly two weeks after he was defaulted from the U.S. Open, and a day after he was warned by the chair umpire for breaking his racket in a fit of rage, Djokovic received an obscenity warning midway through a 7-5, 6-3 win over Casper Ruud in the Italian Open semifinals Sunday in Rome. The obscenity came in the third game of the second set, by which time Djokovic had a running dialogue with the chair umpire over a series of contested calls. "I deserved the warning," Djokovic said. "I didn't say nice things in my language. As opposed to his previous two outbursts, this time there were fans in the stands who could clearly hear how Djokovic dealt with his frustration. With 1,000 spectators allowed in to the Foro Italico for the first time this week, a large proportion of those in attendance were children. Ruud was Nick Kyrgios' opponent during last year's Italian Open when the Australian walked off the court and threw a chair onto the red clay, leading to him being defaulted and fined. Djokovic improved to 30-1 this year. His only loss came when he was thrown out of the U.S. Open for unintentionally hitting a line judge in the throat with a ball during his fourth-round match against Pablo Carreno Busta. In Djokovic's 10th Rome final on Monday -- he has won four -- he'll face eighth-seeded Diego Schwartzman, who edged 12th-seeded Denis Shapovalov 6-4, 5-7, 7-6 (4) in a match that lasted 3 hours, 15 minutes.

Five ruled out of French

Two players in the qualifying rounds for the French Open have tested positive for the coronavirus, the French Tennis Federation said late Sunday, while three others have been in close contact with a coach who also tested positive. The FFT said in a statement that all five players will isolate for a period of seven days, and none of them will participate in the qualifiers starting today for the Sept. 27-Oct. 11 tournament. Organizers did not name any of the players or the coach concerned.

The Chicago Bears have agreed to a three-year contract extension with running back and return specialist Tarik Cohen. The deal announced Sunday guarantees about $9.5 million and could be worth $18.25 million, agent Drew Rosenhaus said. Drafted by the Bears out of North Carolina A&T in the fourth round in 2017, the speedy and versatile Cohen has been an important contributor on offense and special teams. He was an All-Pro as a punt returner in 2018, when he returned 33 punts for 411 yards. Cohen also ran for 444 yards that year and led the team in yards receiving with 725. His production dipped last year with 213 yards rushing and 456 receiving.

Toyota Gazoo's No. 8 car comfortably won the 24 Hours Le Mans by five laps from Rebellion No. 1 on Sunday to secure a third consecutive victory in the prestigious endurance race in Le Mans, France. It was also a third consecutive win for Swiss driver Sebastien Buemi and Japan's Kazuki Nakajima driving. Brendon Hartley was the other driver, having replaced two-time Formula One champion Fernando Alonso. Buemi and Hartley sat on the side of the car as Nakajima drove toward the podium. Hartley won for a second time after tasting success with the Porsche LMP Team in 2017 before an unhappy season in Formula One. The Swiss team's Rebellion No. 1 featured American driver Gustavo Menezes and Brazilian Bruno Senna -- the nephew of late F1 great Ayrton Senna. It finished one lap ahead of Toyota Gazoo's No. 7, with Rebellion's No. 3 finishing in fourth place.

The opener of the WNBA playoff series between the Seattle Storm and the Minnesota Lynx was postponed nearly 90 minutes before its scheduled tipoff Sunday because of inconclusive covid-19 test results for Storm players. The players with inconclusive results have undergone additional testing and are in isolation, according to the WNBA. WNBA Commissioner Cathy Engelbert was at the hotel when she found out about the inconclusive results and boarded the Storm's bus to let them know. "We needed more testing and data," Engelbert said in a TV interview. "As soon as I talked to them they were concerned about health and safety, and it wasn't about basketball at that point." The Lynx already had arrived at the arena and some of the players had been warming up when they were told the game was postponed. The league didn't immediately announce when Game 1 of the best-of-five semifinal series would be played. Game 2 was scheduled for Tuesday night.

Gary Hughes, a beloved professional scout for numerous big league organizations during a 54-year career, has died in Northern California after a battle with cancer. He was 79. Hughes was a regular at Bay Area ballparks in recent years working for the Red Sox and Diamondbacks. Arizona announced his death in a statement, saying he passed away on Saturday. "Gary Hughes was the quintessential baseball man," baseball Commissioner Rob Manfred said. "He coached at various levels. He scouted. He developed players. And he helped put together major league rosters." Hughes had lived for years in the scenic coastal city of Santa Cruz. "Gary's impact on the game of baseball was exceeded only by the number of friends he made throughout it," the Diamondbacks said. "He was a member of the Giants, Mariners, Mets, Yankees, Expos, Marlins, Rockies, Reds, Cubs and Red Sox organizations before joining the D-backs and it was an honor to have a legend like him be part of our family for two seasons." A member of the Professional Baseball Scouts Hall of Fame, Hughes always was a popular figure when he turned up before games with a briefcase and a big grin, ready to work or share his baseball knowledge with genuine care and love for the game. 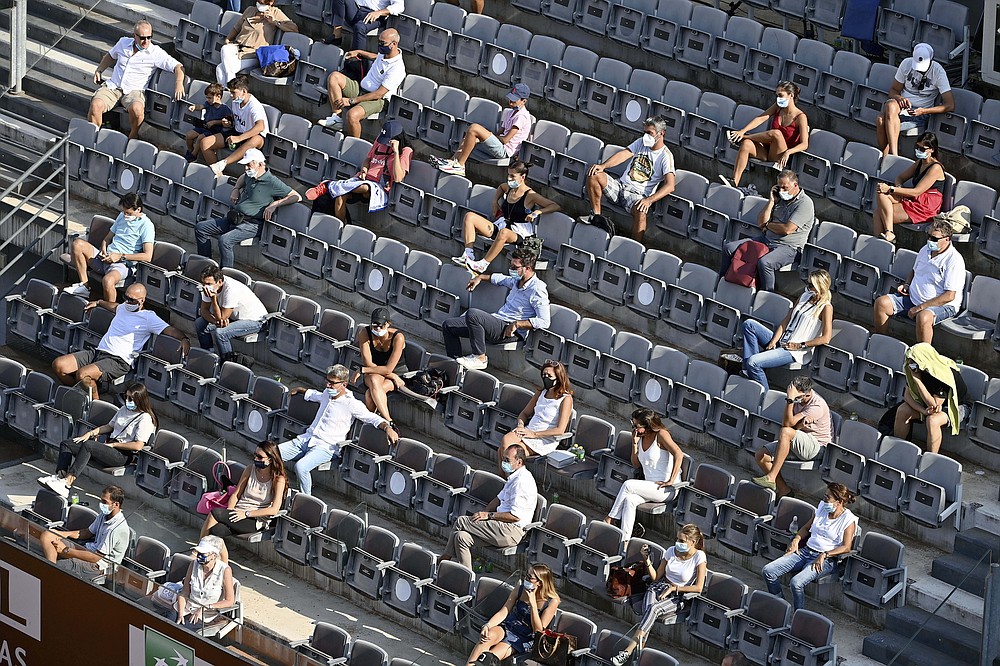 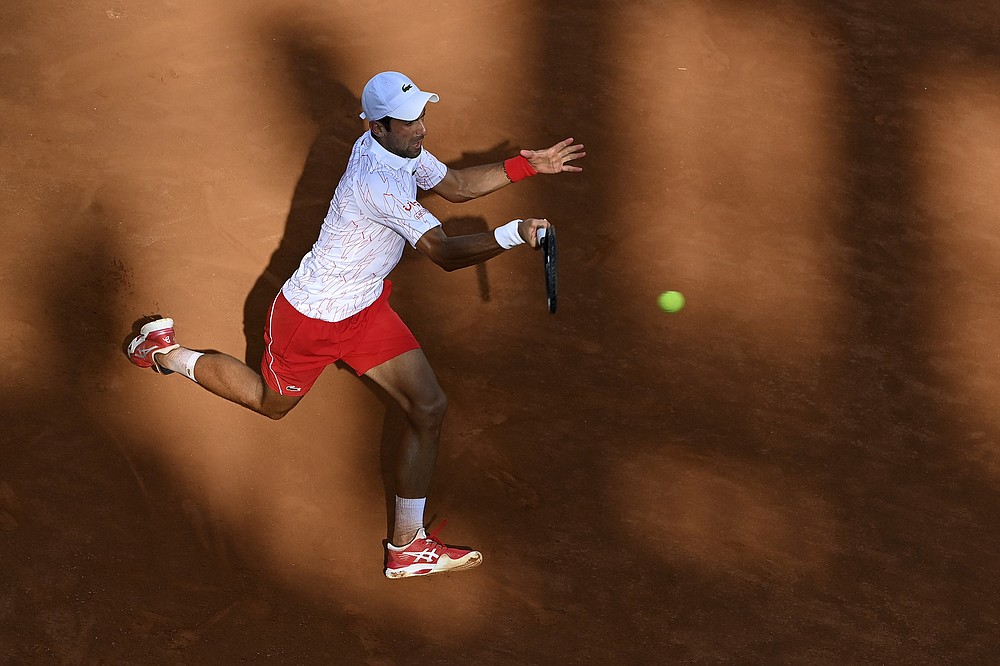 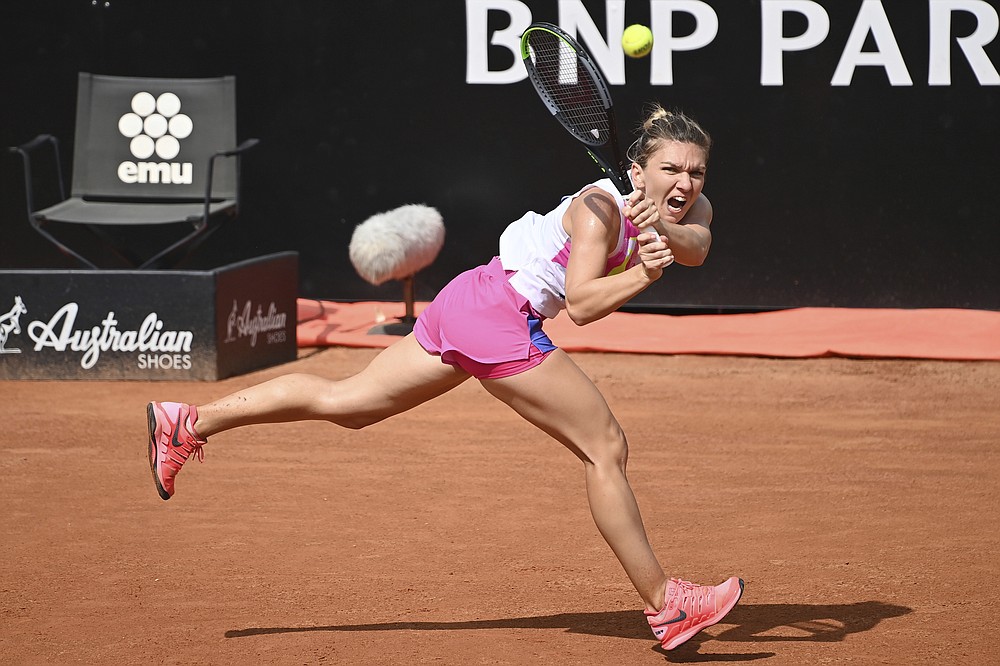 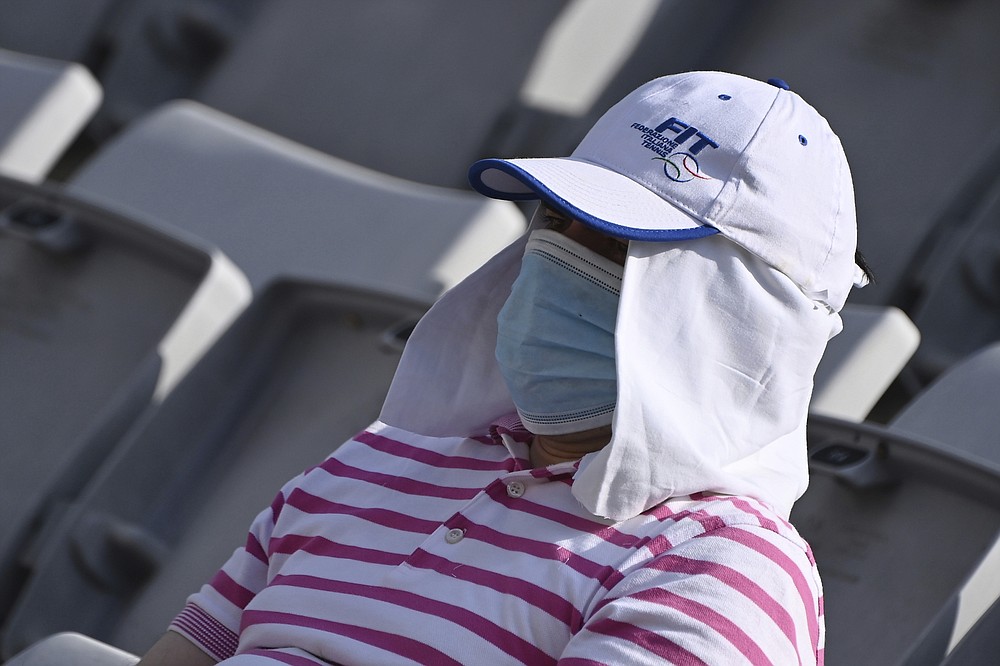 A spectator wears a face mask to protect against COVID-19 contagion during the semifinal match between Spain's Garbine Muguruza and Romania's Simona Halep, at the Italian Open tennis tournament, in Rome, Sunday, Sept. 20, 2020. (Alfredo Falcone/LaPresse via AP) 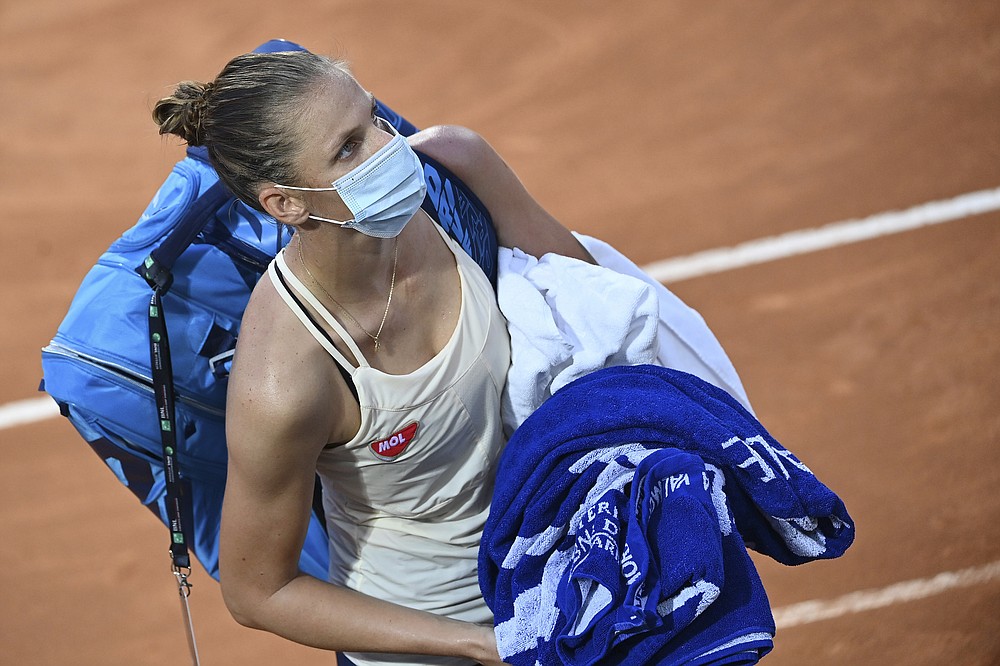 Czech Republic's Karolina Pliskova leaves after winning her match with Marketa Vondrousova during their semifinal at the Italian Open tennis tournament, in Rome, Sunday, Sept. 20, 2020. (Alfredo Falcone/LaPresse via AP) 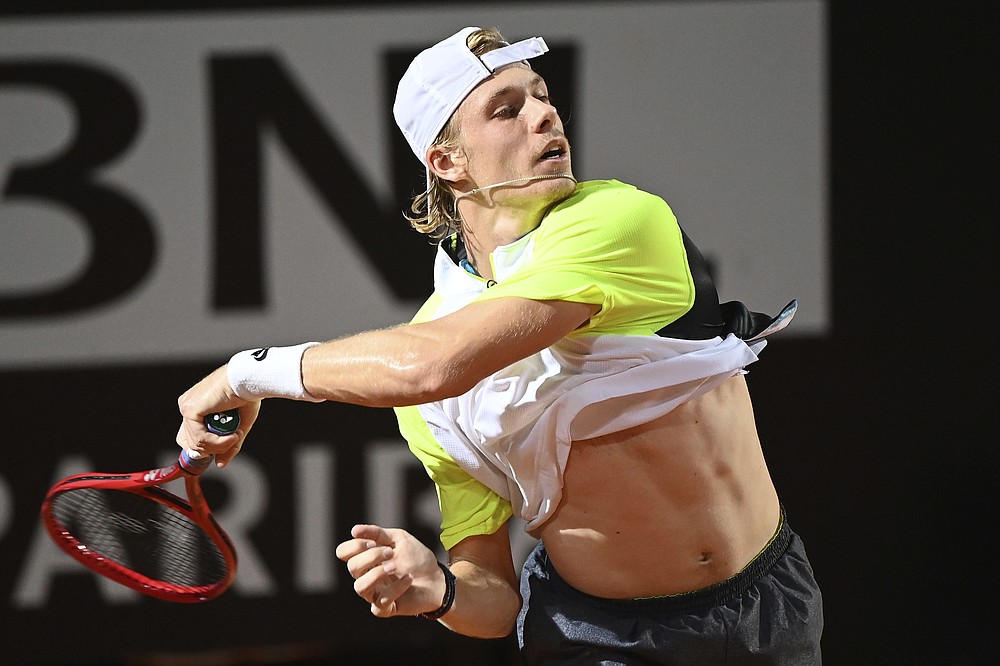 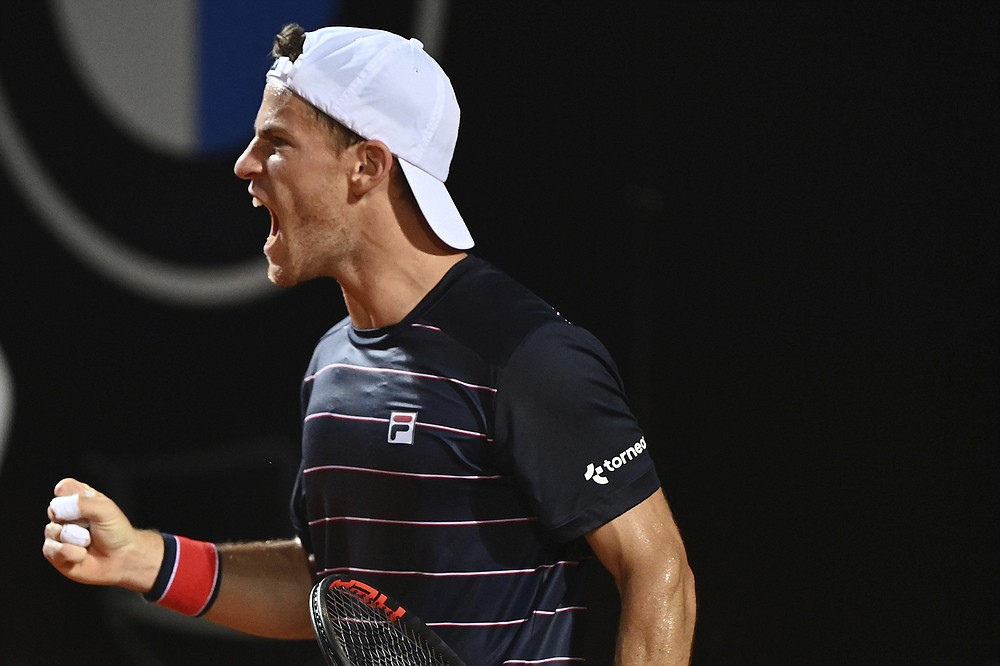 Argentina's Diego Sebastián Schwartzman reacts during his match with Canada's Denis Shapovalov during their semifinal at the Italian Open tennis tournament, in Rome, Sunday, Sept. 20, 2020. (Alfredo Falcone/LaPresse via AP)
ADVERTISEMENT