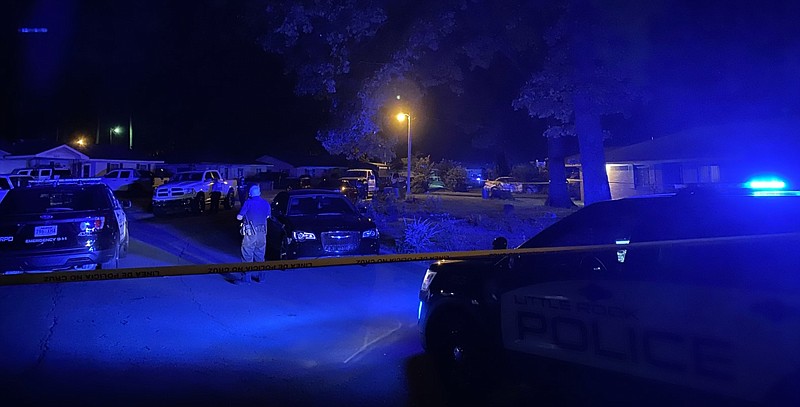 Little Rock Police Department officers are on the scene at 6809 Dahlia Drive after a report of a homicide on Sunday, Sept. 20, 2020. ( Arkansas Democrat-Gazette / Joseph Flaherty)

Little Rock police were investigating the shooting death of a man in a residential neighborhood in south Little Rock Sunday evening and a suspect was in custody, according to a police spokesman.

Police responded to the residence located at 6809 Dahlia Drive just before 7 p.m. after a person inside the residence called police about a shooting that had just occurred, officer Eric Barnes told reporters at the scene Sunday night. When they arrived, police found a Black man outside the residence who was confirmed to be deceased.

During the investigation, officers spoke with someone inside the house they believed to be the suspect based on statements made to police when they entered the residence, Barnes said. Police were told the weapon used in the shooting was inside the residence, according to Barnes.

Around 8 p.m. Sunday night, a section of the street leading up to the residence was blocked off by police with crime-scene tape. The street where the shooting occurred is composed of single-family homes and is located near Ottenheimer Park, just south of the Interstate 30 interchange with South University Avenue.

Detectives received a search warrant on Sunday evening and were planning to search the rest of the residence to collect evidence for the investigation, according to Barnes.