Public can weigh in on levee, floodwall projects in 7 states, including Arkansas 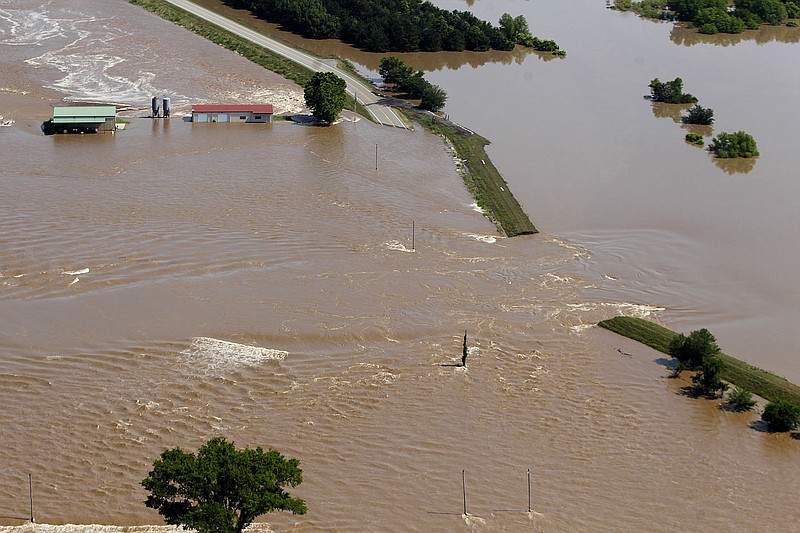 Arkansas Democrat-Gazette File Photo/THOMAS METTHE Floodwaters from the Arkansas River rush through a broken levee May 31 in Yell County south of Dardanelle. Arkansas Natural Resources Commission staff members have recently recommended funding levee repair projects in nine counties. One award that's more than $1 million would go toward repairing the Dardanelle Drainage District levee. About $1.5 million would help rebuild the part of the levee that washed out during the flooding and to fill in a nearly 30-foot hole that those rushing waters created, said Mark Thone, county judge for Yell County.

NEW ORLEANS — The Army Corps of Engineers says levee and floodwall projects in seven states from Missouri to Louisiana include 101 areas where levees are an average of 2 feet below the recommended height and 22 where floodwalls are too low or need stabilizing.

The agency will hold online meetings Sept. 30 and Oct. 1 to take public comments about its environmental impact statement for all 143 projects, it said in a news release Tuesday.

Most of the work is along the Mississippi River from Cape Girardeau, Missouri, to southeastern Louisiana, also including projects in Kentucky, Tennessee, Arkansas and Mississippi, according to the document released Aug. 28. Seven projects are on the Ohio River in southern Illinois. All are described in the first of 21 appendixes to the 212-page document.

Levee work also includes reducing seepage or the chance that part of the dirt embankment will slide off. Some projects are planned to correct more than one problem in the districts headquartered in Memphis, Tennessee, Vicksburg, Mississippi and New Orleans.

"Based on traditional funding allocations, these Work Items would likely begin in 2020 or 2021 and extend for more than 50 years," according to the environmental impact statement.

All are needed to meet the Corps' flood protection standards and have already been authorized, the document said.

Both meetings will be livestreamed on the New Orleans District's Facebook page at https://www.facebook.com/usacenola/. The Sept. 30 meeting is at 9 a.m. central time, the Oct. 1 meeting at 6 p.m.

During the meetings, the Corps will take comments through Facebook or by calling or texting (601) 392-2237. Mailed and emailed comments will be accepted through Oct. 13. Mailed comments should be sent to the Vicksburg District office at 4155 Clay Street.