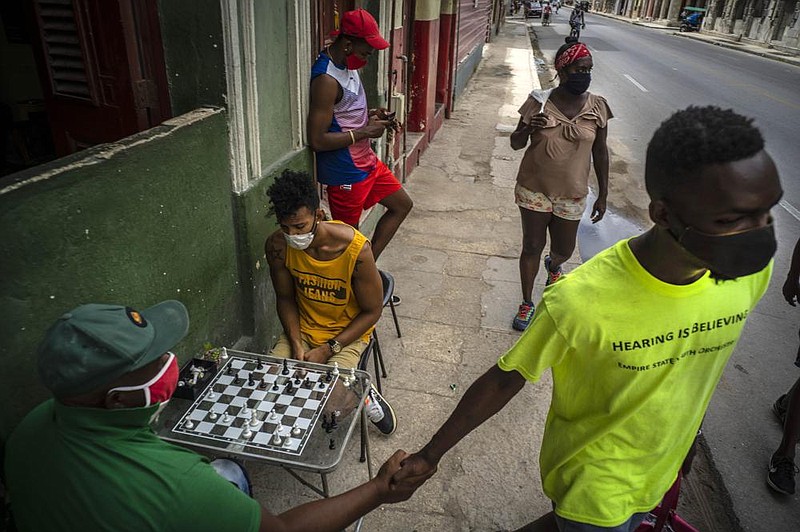 Trump said the new Treasury Department sanctions will ensure that U.S. dollars do not fund the Cuban government. He has been taking steps over the past four years to reinstate an economic blockade of Cuba and reverse the strategy of restoring diplomatic relations with the Caribbean island, the policy pursued by former President Barack Obama, a Democrat.

At a White House ceremony honoring 20 veterans of the failed 1961 Bay of Pigs invasion of Cuba, Trump assailed the Obama policy as a "weak, pathetic, one-sided deal" with Cuban leaders Fidel and Raul Castro -- and linked it to his presidential rival, Joe Biden, who was Obama's vice president.

He said U.S. sanctions will remain until Cuba releases all political prisoners, rights to free assembly and expression are respected, political parties are legalized and free elections are scheduled.

LOS ANGELES -- Federal investigators are looking into whether a huge wildfire near Los Angeles was sparked by Southern California Edison utility equipment, according to the company.

Edison has turned over a section of an overhead conductor from its transmission facility in the area where the Bobcat Fire started more than two weeks ago, company spokesman David Song said Wednesday.

The initial report of fire was near Cogswell Dam in the San Gabriel Mountains at 12:21 p.m. on Sept. 6.

Cameras captured smoke developing in the area around 12:10 p.m., prior to the activity on Edison's circuit, he said.

Edison will assist the U.S. Forest Service in its investigation of the fire that has burned more than two dozen homes and other buildings on its way to becoming one of the largest blazes in Los Angeles County history.

HOUSTON -- A weakened Beta continued its slow trek across several Southern states on Wednesday, bringing rainfall to parts of Louisiana, Arkansas and Mississippi after having flooded homes and roadways in Texas.

Houston began drying out on Wednesday after some parts of the metro area got nearly 14 inches of rain over the past three days, according to the National Weather Service. Flooding from heavy rain prompted around 100 water rescues on city roadways. Preliminary reports showed at least 11 structures were flooded in the city limits.

"It's not nearly as bad as it could have been," said Houston Mayor Sylvester Turner.

Flash flood warnings were issued Wednesday for parts of Louisiana, where up to 4 inches of rain had fallen and up to 4 more inches could fall on top of that, the Weather Service said. The southwestern corner of Louisiana is still recovering after getting pounded by Hurricane Laura last month.

Rainfall of 3 to 5 inches was expected today in parts of Central Mississippi, with some areas possibly getting up to 7 inches.

Beta, which made landfall late Monday as a tropical storm just north of Port O'Connor, Texas, is the first storm named for a Greek letter to make landfall in the continental United States. Forecasters ran out of traditional storm names last week, forcing the use of the Greek alphabet for only the second time since the 1950s.

MADISON, Wis. -- The Republican-controlled Wisconsin Legislature on Wednesday appealed a federal court ruling that allows for absentee ballots to be counted up to six days after the Nov. 3 presidential election in the battleground state.

The appeal was expected after Monday's highly anticipated court ruling in favor of Democrats and their allies. The judge even put his ruling on hold for seven days in anticipation of a quick appeal.

Wisconsin law requires absentee ballots to be returned by 8 p.m. on Election Day. But Democrats argued that given challenges posed by the ongoing coronavirus pandemic, along with the anticipated large number of absentee ballots, the deadline ought to be extended. U.S. District Judge William Conley agreed to the extension in Monday's ruling.

The Legislature's attorneys said in a court filing Wednesday that they plan to ask the 7th U.S. Circuit Court of Appeals to put the ruling on hold pending appeal. The case is expected to go all the way to the U.S. Supreme Court.

In 2016, the presidential race was decided in Wisconsin by less than 1 percentage point -- fewer than 23,000 votes. Wisconsin is viewed by many as a potential tipping point state this election for either President Donald Trump or Democrat Joe Biden.