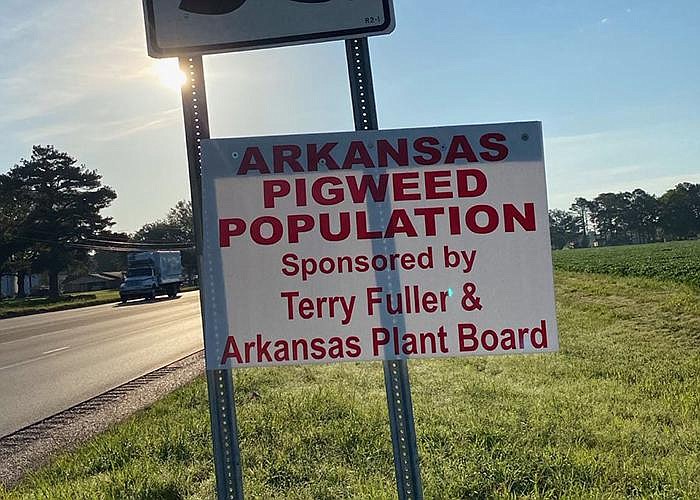 This sign and others blaming Terry Fuller and the state Plant Board for pigweed infestation were posted in at least four places near Fuller’s farm in east Arkansas this summer. The state highway department sent out crews to take them down. (Special to the Arkansas Democrat-Gazette)

POPLAR GROVE -- An east Arkansas farmer who also is chairman of the state Plant Board says it's not a coincidence that his farming operations have been vandalized three times this summer, resulting in some $80,000 in damage.

To Terry Fuller, it's because he has been a vocal opponent of the late-season widespread use of dicamba, a herbicide. A Plant Board member for seven years, he has been its chairman since this spring.

In August, the diesel engines of two tractors -- parked 12 miles apart atop a levee of the St. Francis River -- were ruined because someone fed pieces of plastic into their fuel tanks. When the tractors were fired up for work the next morning and as oil warmed, the plastic melted, gumming up the engines' crankshafts and damaging other parts. Those repairs cost about $60,000.

Electrical wires inside the cab of a third tractor were cut on an unknown date this summer, costing another $1,000 in repairs.

As a sort of precursor to the alleged vandalism, Fuller in late July found strange signs bolted onto highway signs in the area. The signs read: "ARKANSAS PIGWEED POPULATION sponsored by Terry Fuller & Arkansas Plant Board." Fuller said he knew of at least four such signs.

The state Department of Transportation said Thursday that it sent out a crew from a regional office to remove the two large placards that had been placed on state highway signs.

"I don't think it's a coincidence in any kind of way," Fuller said Wednesday, after weeks of declining to talk on the record about the damage to the tractors for fear it might invite more such incidents. He decided to go public after the hay fire.

The damage to the tractor engines, on the night of Aug. 17, and the daytime hay fire, on Sept. 17, occurred the same days that Fuller spoke at joint meetings in Little Rock of the House and Senate committees on agriculture, forestry and economic development. The meetings were available for viewing on the internet; notice of Fuller's participation was placed days earlier on the committees' publicly available agenda.

Fuller said he is being targeted by farmers who oppose various restrictions the Plant Board has placed on the use of dicamba, which has been linked to about 1,500 complaints of damage to other crops and vegetation in Arkansas since 2016.

In a letter to fellow board members early this week, Fuller wrote, "I will not yield to those who believe they can bully me into silence by acts of vandalism or character defamation." The board, he wrote, has "done the right thing, by following the science in these matters, and I will continue to stay on that path."

During an interview Wednesday in Poplar Grove, Fuller released that letter as well as written estimates of the property damage. He also said he is about to more broadly publicize a $10,000 reward.

No arrests have been made. The law enforcement division of the Department of Agriculture is leading the investigation, according to sheriff's offices in eastern Arkansas that were contacted by Fuller.

The use of dicamba has divided Arkansas farmers -- one was shot to death in October 2016 in a dispute linked to crop damage he sustained in Mississippi County. (Farmer Allan Curtis Jones was convicted of second-degree murder and received a 24-year prison sentence in the death of Mike Wallace, 55, of Monette.)

Farmers who plant dicamba-tolerant soybeans and cotton say they need the chemical to combat pigweed, which has grown resistant to other herbicides. Monsanto, now owned by Bayer, developed the dicamba-tolerant crops.

Other farmers say they should be free to plant whatever they like, without fear of damage from a herbicide that, according to weed scientists in Arkansas and other states, can lift from plants hours or even days after application and damage nontolerant crops, fruits, vegetables and ornamental trees and shrubs, especially as temperatures and humidity levels rise.

Fuller and his twin brother Jerry raise crops and cattle on about 5,000 acres in Phillips, Lee and Monroe counties. They also own and operate Fuller Seed and Supply in Poplar Grove, an unincorporated community of about 200 in Phillips County, between Marvell and Helena-West Helena.

The family farm got started in the late 1930s when their father, Ray Fuller, rented 6 acres and borrowed two mules, Terry Fuller said. The 6 acres are now part of Ray Fuller Farms Inc.

The isolation that gives farms a measure of protection also presents opportunities for vandals and thieves, especially in the dark of night. At the end of a work day, tractors and other equipment in far-flung fields usually are left there overnight, not hauled or driven to a farm's headquarters.

"I can recall three incidents of theft, and no vandalism, in more than 60 years of business," Terry Fuller said. "We've had three this summer."

Jerry Fuller said he harvested 3,286 bales of hay this year across several fields. "The 367 bales atop the levee were the only ones that caught on fire," he said. The burning hay was spotted by a neighboring farmer.

Who farms what fields also isn't common knowledge, Jerry Fuller said. "Many of our fields are so isolated," he said. "Somebody really had to work hard to get to those tractors and hay."

The incivility toward Terry Fuller actually began as early as November 2017, during a public hearing of the Plant Board to decide dicamba rules for the 2018 crop season. Some farmers in the crowd of about 250 began receiving, or sharing, off-color, sex-related social media posts from a fictitious Twitter account under Fuller's name.

He asked for an investigation but said authorities later told him they couldn't prove that the farmer whose cellphone was linked to the original post actually sent the post or created the account.

He said the efforts to "bully and intimidate" him are more than a personal attack.

"This is a 107-year old institution," he said of the Plant Board. "There's a handful of farmers and companies who want to tear it down." The board's 18 members receive no salary; they can be reimbursed for travel, at 50 cents a mile.

The identical twins had different reactions to the vandalism.

"I'm just a redneck," he said. "I'm going to protect the people that work for me, my family and my property. It's got me carrying a pistol everywhere I go. The greed of some farmers has brought this on. It's hurting the woman who's got a 50-year-old oak tree in her yard or who's trying to grow tomatoes and okra. It's hurting farmers who play by the rules."

Terry Fuller said, "I was sad at what our community and world had come to. It's not a state problem; dicamba is a national problem. Society as a whole has lost a moral compass."

Anger, he said, has yet to creep in. 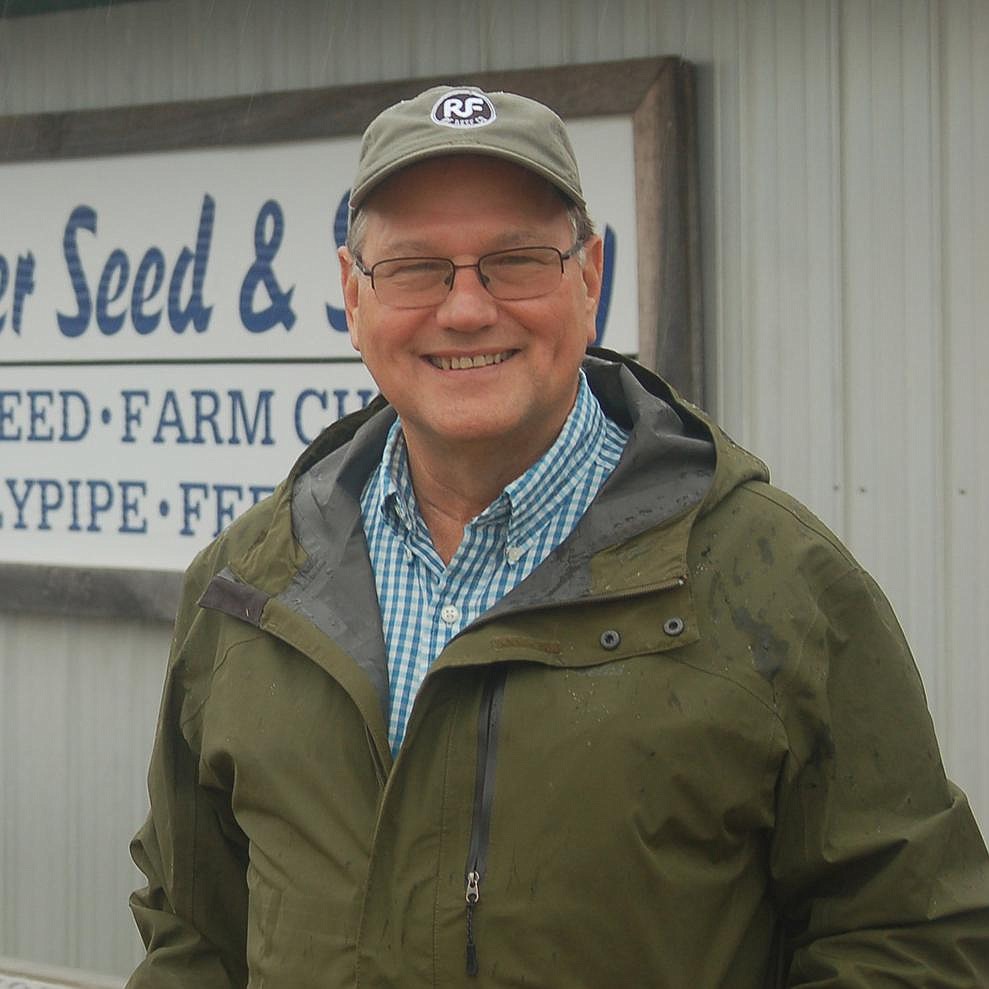 Terry Fuller, chairman of the state Plant Board, stands outside Fuller Seed and Supply in Poplar Grove on Wednesday. Fuller believes costly acts of vandalism on his tractors and the deliberate burning of hundreds of his hay bales are in retaliation for his support for restrictions on dicamba. “I don’t think it’s a coincidence in any kind of way,” he said. (Arkansas Democrat-Gazette/Stephen Steed)