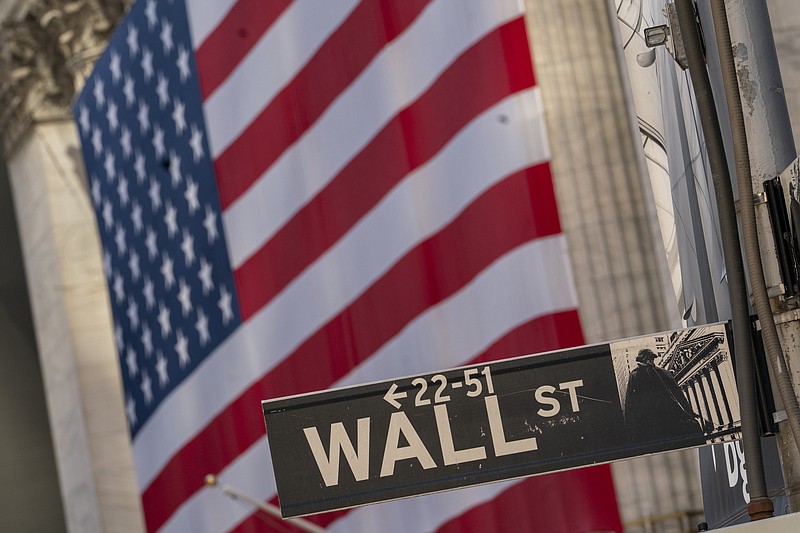 The Wall Street street sign is framed by a giant American flag hanging on the New York Stock Exchange, in a Monday, Sept. 21, 2020 file photo. Stocks are opening higher on Wall Street, recovering after their first four-week losing streak in more than a year. A burst of corporate deals helped give investors confidence to put money back in the market, and the S&P 500 rose 1.4% in the early going Monday, Sept. 28, 2020. (AP Photo/Mary Altaffer, File)

Stocks notched solid gains Monday as Wall Street clawed back some of its sharp and sudden September losses.

The S&P 500 rose 1.6%, its third straight gain. The benchmark index was coming off its first four-week losing streak in more than a year and is on track to close out September with a loss of 4.2% after five months of gains.

The market's gains were widespread, with more than 90% of the stocks in the S&P 500 higher. Technology stocks, which have been getting the most criticism for getting too expensive following their strong pandemic run, did the heaviest lifting. Several companies announced big mergers and acquisitions, which helped to push markets higher.

Optimism that Democrats and Republicans in Congress will reach a deal on another coronavirus relief bill also helped put investors in a buying mood, said Nela Richardson, investment strategist at Edward Jones.

"There's real concern about a second wave of infections, concern that we're just riding the coattails of growth that happened after the economy opened up in May," Richardson said. "Anything that looks like new lifeblood for the economy is read as a positive stimulus."

Cleveland-Cliffs jumped 11.6% after it said it will buy the U.S. business of steel-making and mining giant ArcelorMittal for $1.4 billion. ArcelorMittal's U.S.-listed stock rose 10.6%.

Another strong gainer was Uber, which rose 3.2% after it won an appeal that will allow it to keep operating in London.

Technology stocks powered much of the S&P 500's gains. Amazon climbed 2.5%, Apple rose 2.4% and Microsoft gained 0.8%. These companies are massive, which gives their stock movements much more sway over the S&P 500 and broad-market indexes than other stocks.

Several factors have been behind the S&P 500's abrupt drop this month, which halted a remarkable return to record heights for Wall Street even as the pandemic continued to rage.

Many of those factors are still in place, which means analysts along Wall Street say the tumultuous trading may not be over.

"We're not out of the woods yet," Richardson said. "Investors should expect volatility, especially as we get closer to the election."

Investors are still waiting for Congress to deliver another round of support for the economy after extra unemployment benefits for workers and other stimulus expired. Tensions are still rising between the United States and China. And the upcoming U.S. presidential election still means plenty of uncertainty for investors, from what it could do to corporate tax rates to how long markets will need to wait until after Election Day to discover the winner.

The latest monthly employment report from the government on Friday could help shed some more light on the economic recovery, but it could also mean more volatility for the markets, said Brad McMillan, chief investment officer for Commonwealth Financial Network.

"This week's going to be all about the jobs numbers, that's the elephant in the room," he said.

Information for this article was contributed by Yuri Kageyama of The Associated Press.