Baseball's back: And this season, so are the fans

The Major League Baseball season begins today with a slate of 15 games. After the 2020 regular season was played with no fans allowed in the parks because of coronavirus protocols, fans — albeit largely in restricted numbers — will be in every stadium today. (AP/John Bazemore)

Great to see ya, Buster Posey. Been a while, Tony La Russa. Good luck, Madison Bumgarner and every other National League pitcher toting a bat.

From Comerica Park to Coors Field to the Coliseum, Major League Baseball is set to roll out a big welcome mat today.

Most of all, this opening day, it'll be for the fans.

When Gerrit Cole throws the first pitch of the season -- weather permitting -- nearly 11,000 people could be in the stands at Yankee Stadium. They will sit in socially distanced seats and wear masks inside a park that will continue to operate as a mass coronavirus vaccination site.

Far from normal. But after a year in which fans weren't permitted at any regular-season game because of covid-19 protocols, no longer will "Take Me Out to the Ball Game" strangely echo around empty ballparks during the seventh-inning stretch.

"That's how it's supposed to be, I think," said Bumgarner, ready to start for the Arizona Diamondbacks against Fernando Tatis Jr., Manny Machado and the San Diego Padres. "That's what we're doing. It's an entertainment business. We're all playing a game and competing and everyone's got their team they pull for or just likes watching the game in general."

At Fenway Park, where Xander Bogaerts and the Boston Red Sox host Baltimore, 12% of capacity will be allowed. At Globe Life Field in Texas, where the Rangers open Monday, a full 100% will be permitted.

The Rangers didn't have any fans in their $1.2 billion palace that opened last year during the pandemic-shortened 60-game season. But 11,000 spectators were inside the Arlington, Texas, park when Clayton Kershaw, Mookie Betts, Corey Seager and the Los Angeles Dodgers beat Tampa Bay in MLB's first neutral-site World Series.

Boosted by signing NL Cy Young Award winner Trevor Bauer, the pitching-rich Dodgers start in Colorado. Kershaw gets the opener against the Rockies, while Bauer goes in the second game.

"I'm pumped up for it. Especially pumped up to get back in front of the LA fans for my first home start," Bauer said. "This is going to be cool, putting on the Dodger uniform, playing with this group of guys. I'm really pumped up that baseball is back, especially now that we get to have fans in the stands."

How many will actually be in the box seats and bleachers on April Fools' Day might depend on the weather.

Rain is forecast in Boston, New York and Philadelphia. It's supposed to be wet in Washington, too, where a marquee matchup is waiting at Nationals Park: Two-time Cy Young winner Jacob deGrom of the Mets faces big-hitting Juan Soto at the plate and three-time Cy champ Max Scherzer on the mound.

Temperatures are supposed to be in the 30s with gusty winds at Wrigley Field when Kris Bryant and the Chicago Cubs host Pittsburgh. It's also in the 30s in Detroit, where Cleveland ace Shane Bieber faces the Tigers, and in Cincinnati, where the Reds take on St. Louis newcomer Nolan Arenado.

Arenado and Bauer are among the many stars who switched teams in the offseason. The Padres acquired Blake Snell and Yu Darvish; the Mets traded for Francisco Lindor; Toronto signed George Springer; and the Yankees hope low-risk moves for Corey Kluber and Jameson Taillon pay off.

Some teams will benefit from getting their own players back on the field.

Posey of the Giants, Ryan Zimmerman of the Nationals, David Price of the Dodgers and Marcus Stroman of the Mets were among those who opted out of playing last year because of coronavirus concerns.

A six-time All-Star and three-time World Series champ, Posey liked what he saw in spring training.

"Watching the games on TV last year and seeing just cardboard fans in the stands, it was definitely nice to see some live humans out there," he said.

La Russa, at 76 years old and already in the Hall of Fame, is returning to manage the fortified White Sox. His last time in the dugout was 2011, in a World Series Game 7 win for the Cardinals.

Alex Cora, who guided Boston to the 2018 crown, rejoins the Red Sox while AJ Hinch takes over the Tigers. Both managers were suspended last year for their roles in the 2017 Astros' sign-stealing scandal. 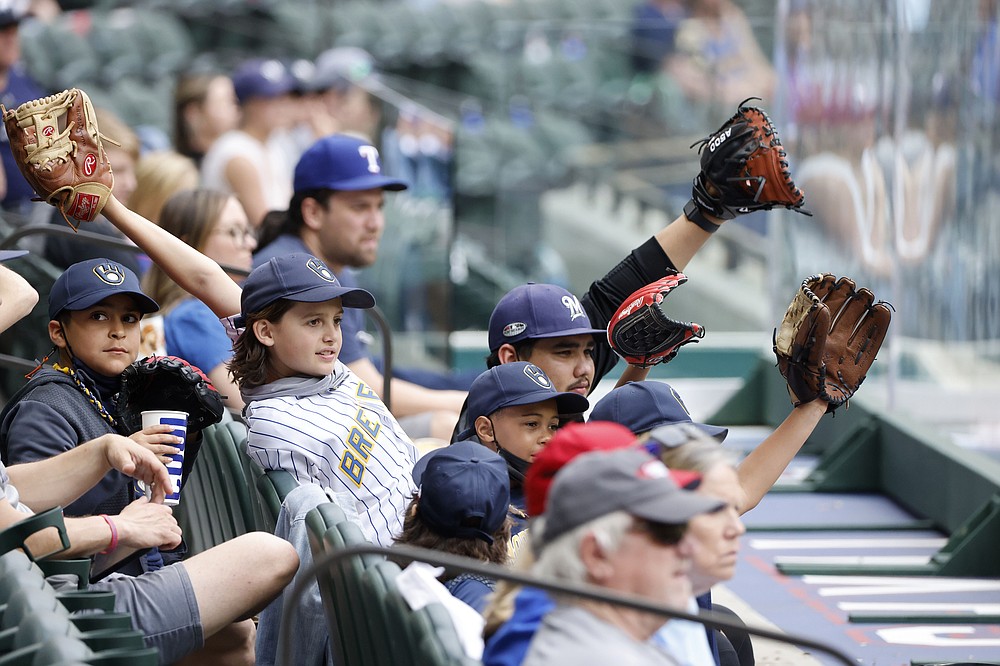 Milwaukee Brewers fans try to get a players attention from behind protective plexi-glass during a preseason baseball game against the Texas Rangers, Tuesday, March 30, 2021, in Arlington, Texas. (AP Photo/Michael Ainsworth) 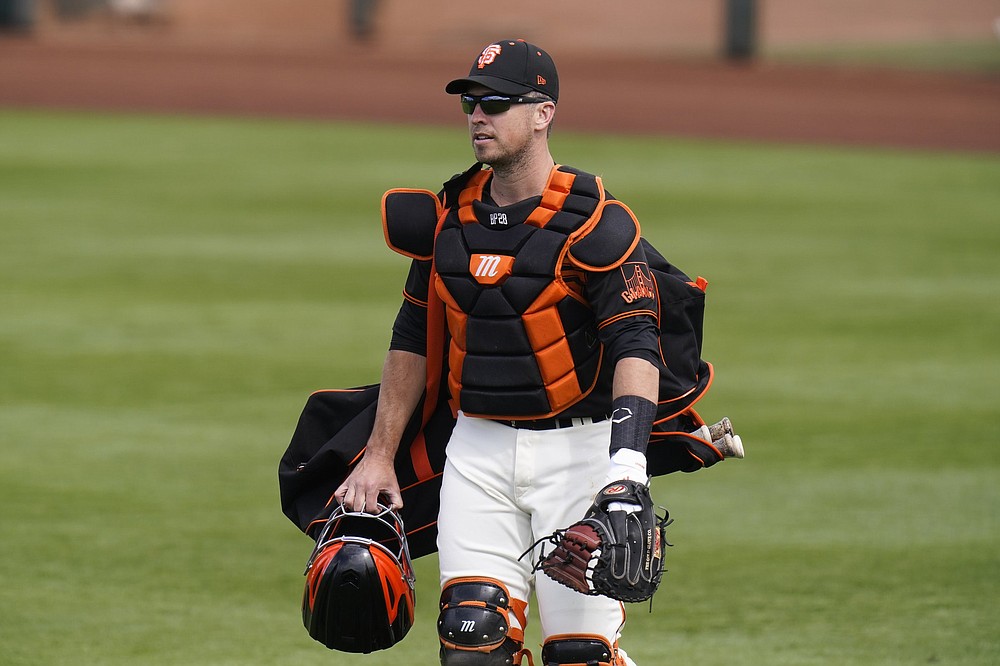 San Francisco Giants catcher Buster Posey returns to the field this season after opting out of playing last year because of coronavirus concerns. “Watching the games on TV last year and seeing just cardboard fans in the stands, it was definitely nice to see some live humans out there,” Posey said. (AP/Jae C. Hong) 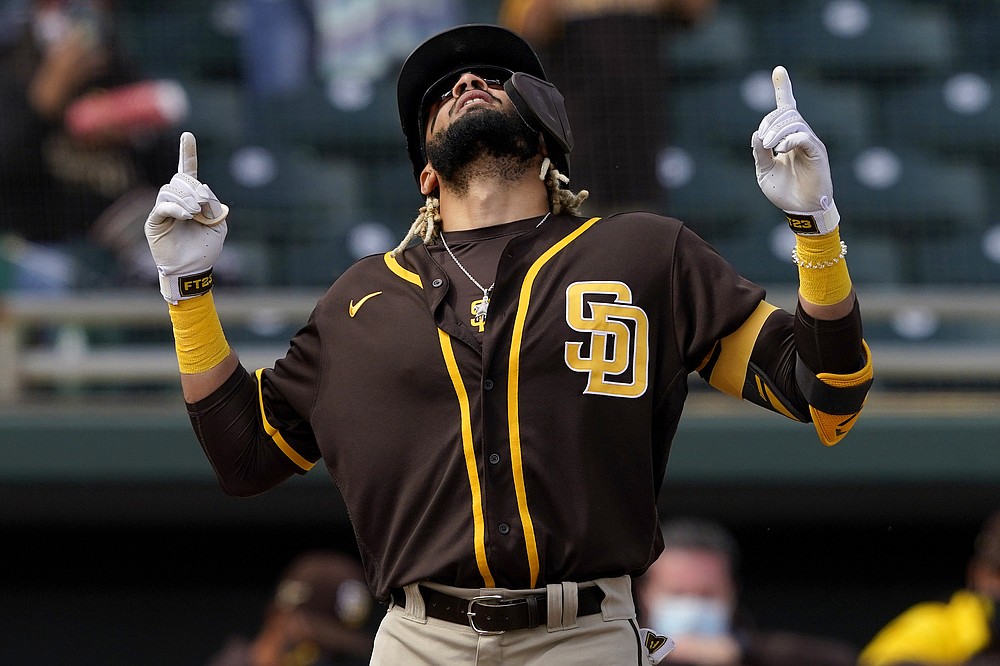 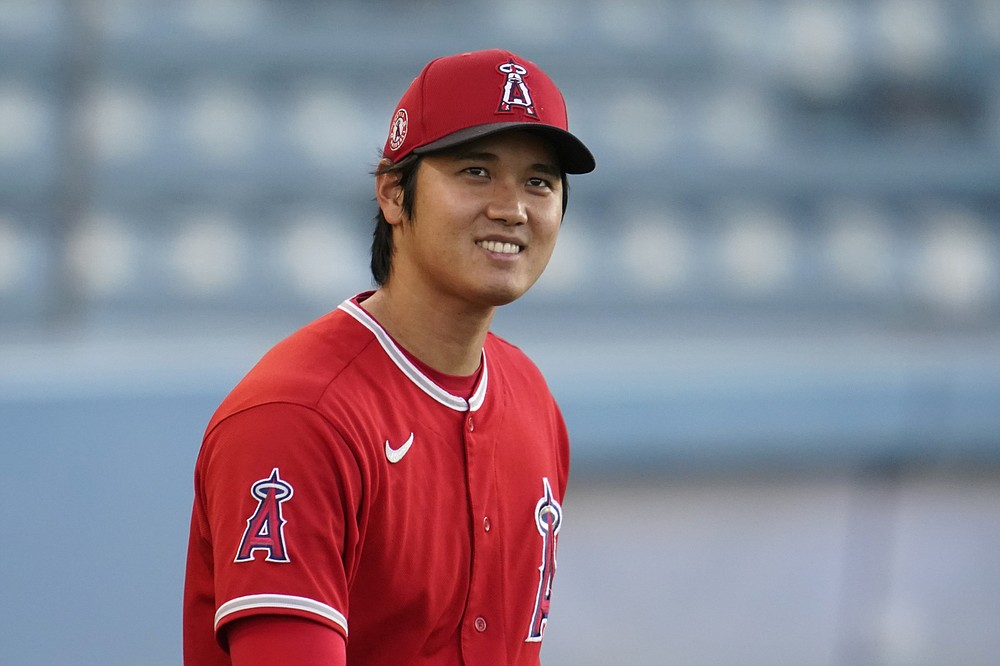 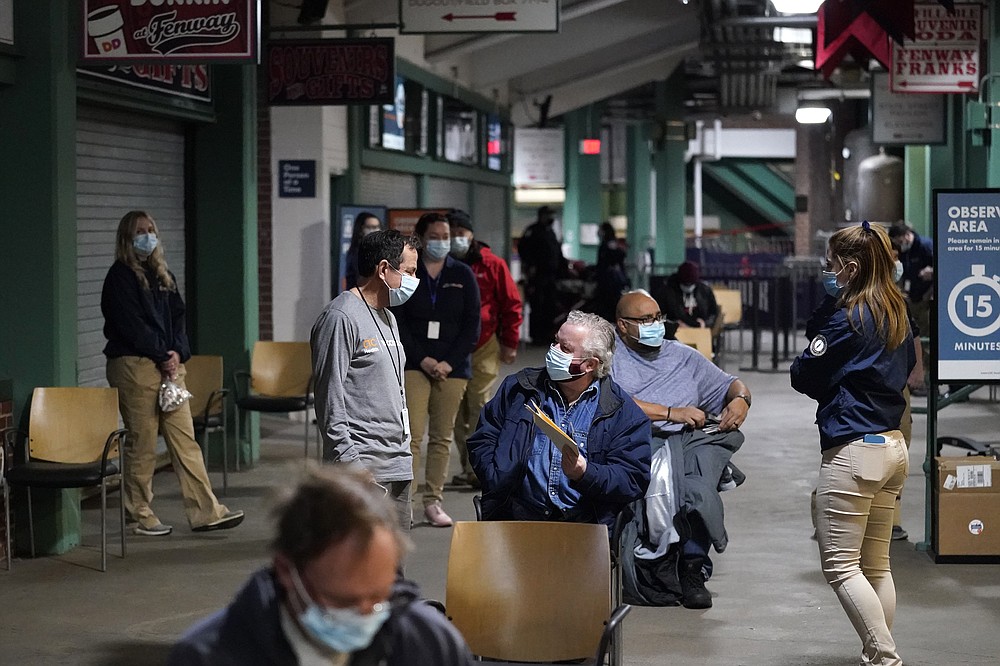 FILE - In this Jan. 28, 2021, file photo, Boston Marathon Race Director Dave McGillivray, second from left, oversees a COVID-19 vaccine injection site staged in a concession area at Fenway Park in Boston. More than 1 million COVID-19 vaccination shots have been given at Major League Baseball stadiums, with the Oakland Coliseum and Marlins Park among the sites planning to continue operating after opening day. The 11 ballparks that converted to mass vaccination centers in the offseason combined to pass a million total shots this week, MLB said Friday, March 25. (AP Photo/Charles Krupa, File) 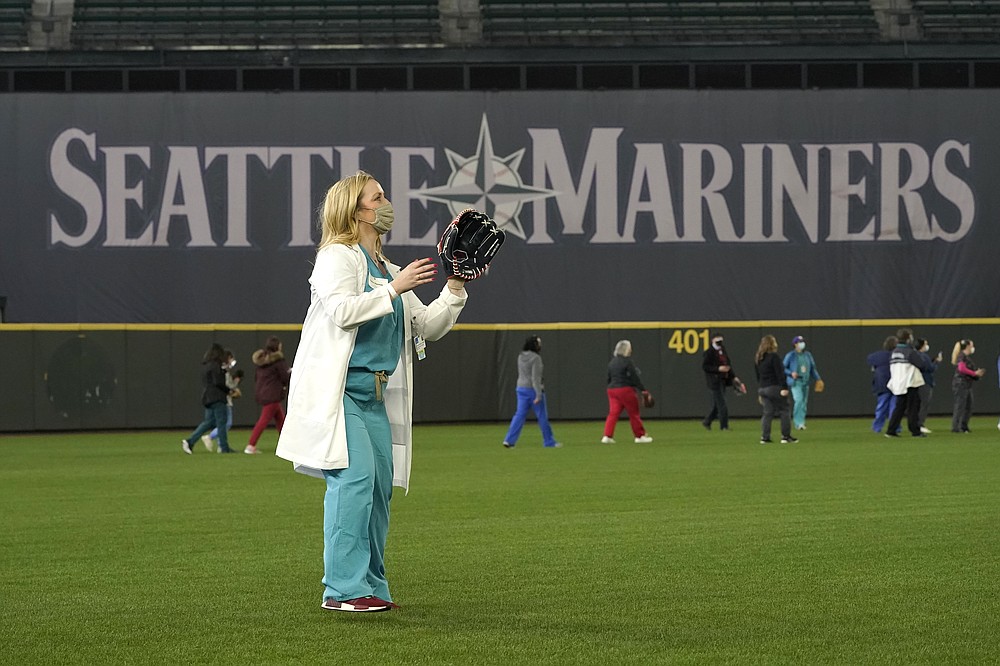 Jessica Sherman, an advanced registered nurse practitioner with Virginia Mason Franciscan Health, plays catch with a colleague in the outfield of T-Mobile Park, the home of the Seattle Mariners baseball team, Monday, March 22, 2021, in Seattle. The Mariners invited health care workers to play catch Monday so they could experience the ballpark ahead of Opening Day on April 1, 2021, and as a way of saying thanks to workers throughout the region who have battled the COVID-19 pandemic in the past year. (AP Photo/Ted S. Warren) 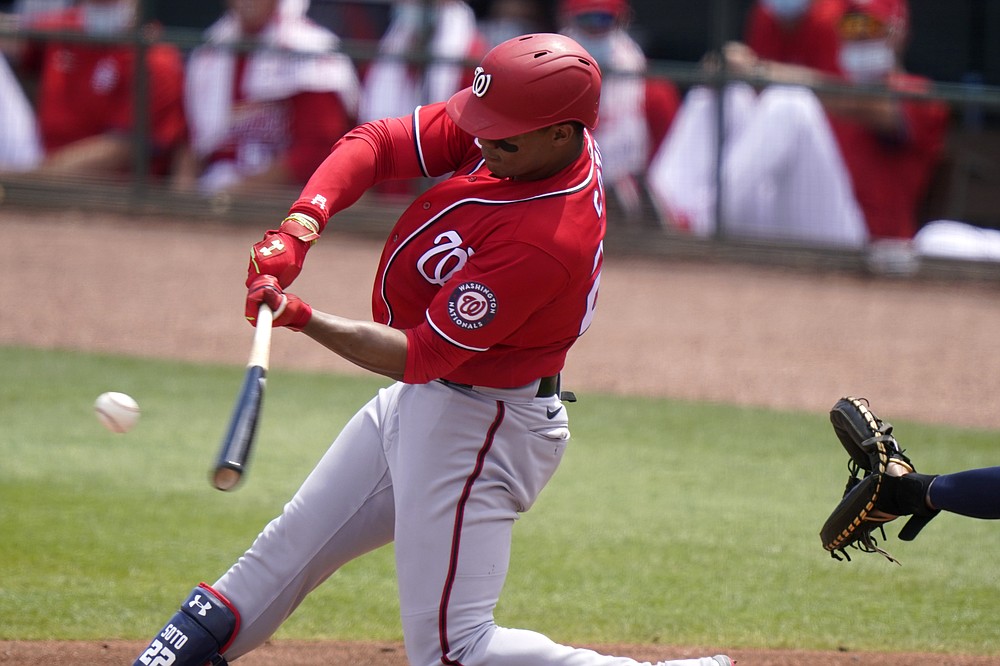 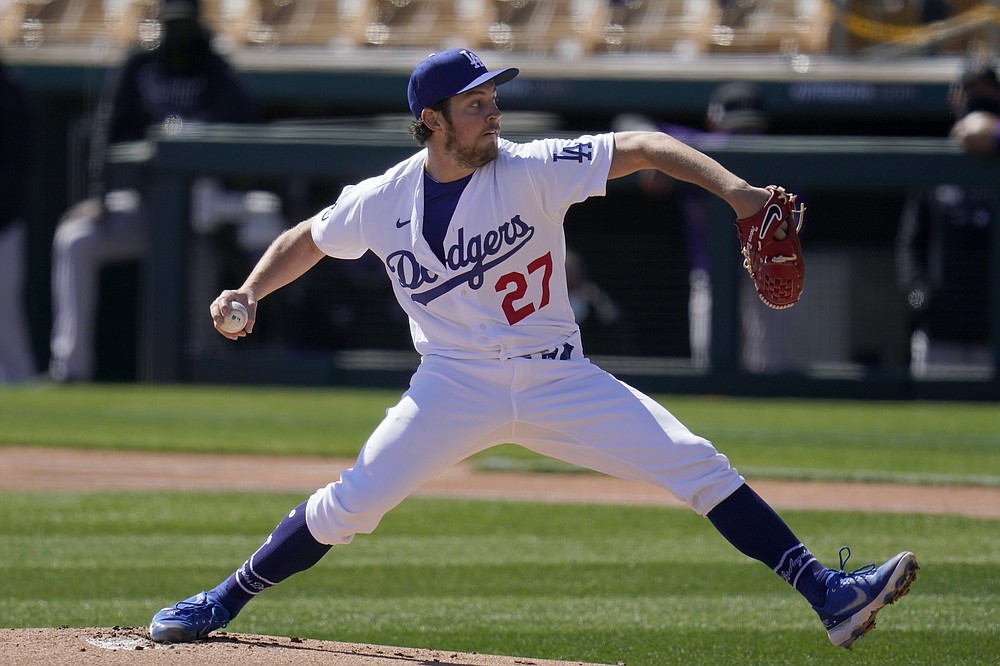 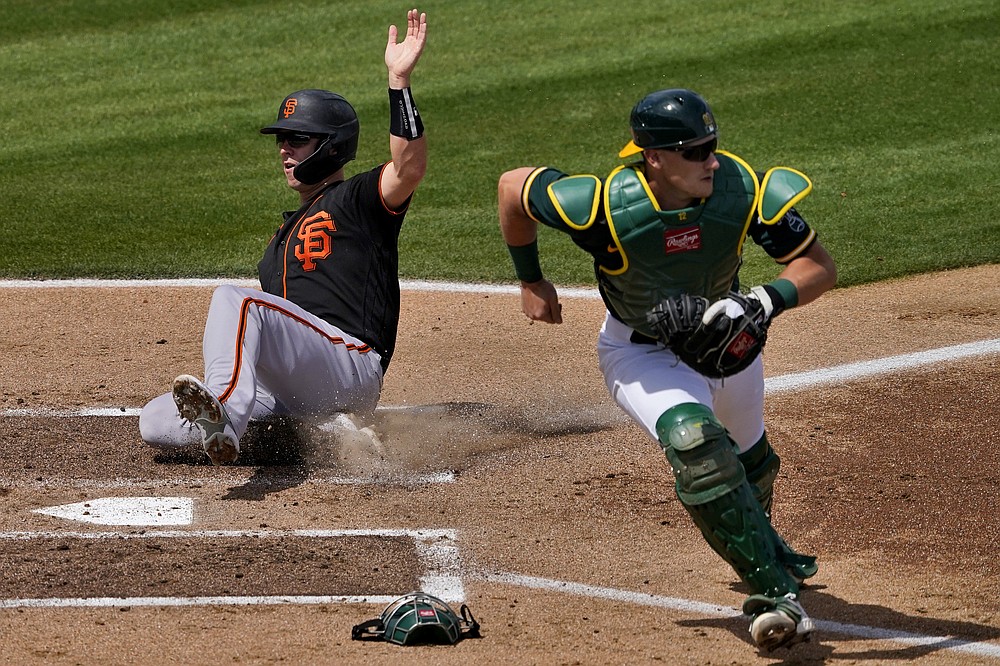 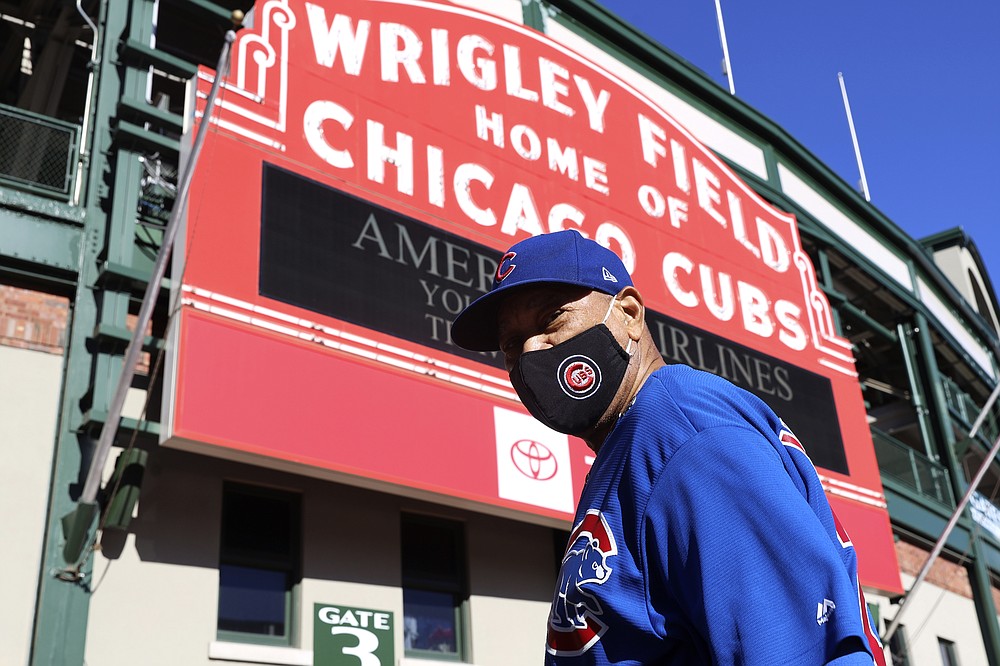 Chicago resident Charlie Moore, 80, poses for a portrait wearing the Chicago Cubs jersey at Wrigley Field on Thursday, March 11, 2021, in Chicago. With limitations, spectators will be allowed to return to the stands at Wrigley Field this season. (AP Photo/Shafkat Anowar)
ADVERTISEMENT