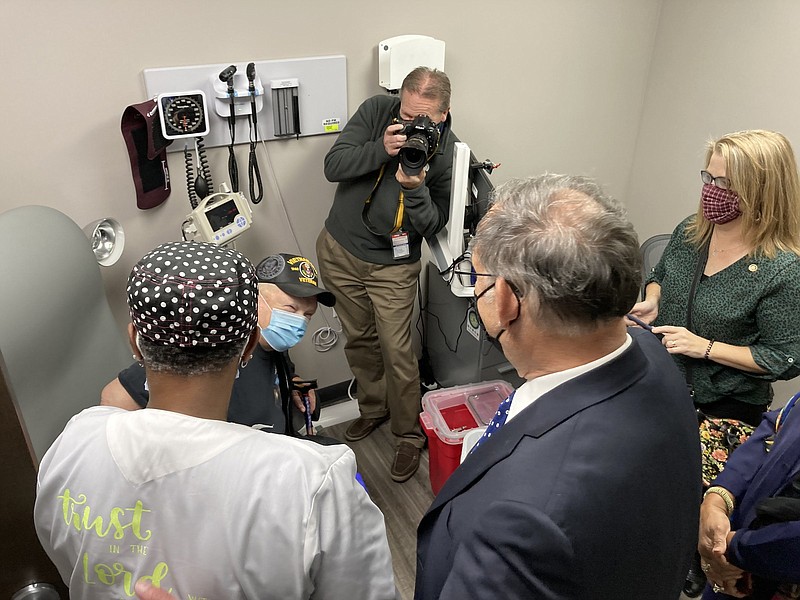 Veteran Lewis Sipes winces as he gets his second covid-19 shot on Wednesday from Pam Griffin, a registered nurse at the Veterans Affairs Clinic in Pine Bluff, while Sen. John Boozman looks on. (Pine Bluff Commercial/Byron Tate)

Sen. John Boozman was in Pine Bluff on Wednesday, encouraging the use of vaccines, praising the Department of Veterans Affairs for its efforts and, while taking a few minutes away from the meet-and-greet, getting a haircut.

The two-term senator's first stop was at Walmart, which a few weeks ago started offering covid-19 vaccinations along with other Walmart and Sam's Club locations around the country. He met with the store's pharmacy team and others at the Pine Bluff location, got his hair trimmed and then was on his way to the Veterans Affair Clinic on Market Street, where he met with the staff and veteran Lewis Sipes.

The 74-year-old Sipes, sitting in a chair, was being prepped for a dose of the Pfizer vaccine by Pam Griffin, a registered nurse with the VA, as Boozman and others crowded into the exam room.

Sipes grimaced a bit when Griffin went to work with the needle, but he said he'd been through worse. During his four years in the Air Force and three in the Army, he said, he once had 14 shots in five minutes.

Asked if it was his first or second shot, Griffin quickly answered for him.

"That's his second. He's done," she said, while Sipes grinned.

"You're so gentle," said Boozman, standing a few feet away as a VA photographer captured the moment.

"You wouldn't want Nurse Ratched, would you?" Griffin asked with a laugh, referencing the evil nurse in Ken Kesey's novel One Flew Over the Cuckoo's Nest.

"This is how we're going to get back to normal," Boozman told Sipes.

"Things haven't been normal in a while," Sipes replied.

Boozman, who announced in early March that he would be running for a third term, spent most of the hour he had at the clinic visiting with members of the medical staff; Margie Scott, medical director of the VA health care system for Central Arkansas; and Dr. Robert King, chief of primary care.

"The VA is doing a tremendous job," Boozman said. "They've done a very good job in handling the covid crisis and in getting vaccinations out to an increasing number of veterans."

Boozman said the VA has the necessary infrastructure to administer shots, which is why he has worked to get more vaccine doses in the hands of the VA.

Scott said shots are given to veterans every day of the year, adding that the health care system's motto is "covid-19 doesn't take a day off, and the Veterans Administration doesn't either." Scott said she got her first vaccine shot on Christmas Day.

Boozman said he stopped by the clinic to "pat them on the back" and make sure that the medical staff at the local level had the tools it needed in order to get shots out to as many patients as possible. He said it was a "good thing" that Gov. Asa Hutchinson had just this week made shots available to everyone 16 and older in the state.

"There was a time when people didn't want to take other people's spots, and that's a good thing; that's what Arkansas is all about," he said. He added that now, the more people who get the shots, the better it will be for all.

Scott said the VA was also giving shots to veterans' spouses, even if the veterans are no longer living.

"We're not going to turn away spouses of vets," she told Boozman.

"Ride us hard," Boozman said in asking Scott to make sure his office was aware of any problems Scott was having at the ground level. "It's great work you all are doing."

This week, the Miami Heat basketball team became the first team to cordon off sections of seats for fully vaccinated fans, despite pushback from the Florida governor's office. Asked how he felt about the use of so-called vaccine passports as a tool to be used in allowing people to gain entry into events and other venues, Boozman said such decisions should not be made at the national level.

"I would prefer that states handle that with businesses," he said. "If the entity wants to do that and the public wants to put up with it, I think that's fine. But it's not something that should come out of Washington with all of the politics involved with that."

The day's event at the clinic largely went unnoticed by area veterans who one by one went through the glass doors, were checked in by someone asking covid-related questions, and then entered the building for medical services.

Roy Williams, 68, who waited in the chilly morning air until he was motioned into the entryway, said he was unaware that Boozman was visiting the clinic that day. Asked what he thought about Boozman, he said the senator had done a "pretty fair job."

"Some politicians make a lot of promises to get elected, and you know they can't follow through," said Williams, who called himself "one of the last draftees" for the Vietnam War and who served in the Army for six months in Vietnam. "Not Sen. Boozman. Some things he can push through, and some things he can't. But if he's willing to try, I'm all for him. That's all anyone can do is make an effort."

Asked about Boozman's haircut, which didn't look much different from how the senator always looks, Kathy Watson, his constituent service director, said her boss was due for a trim.

"Oh, you should have seen it earlier," she said. "It was very curly."