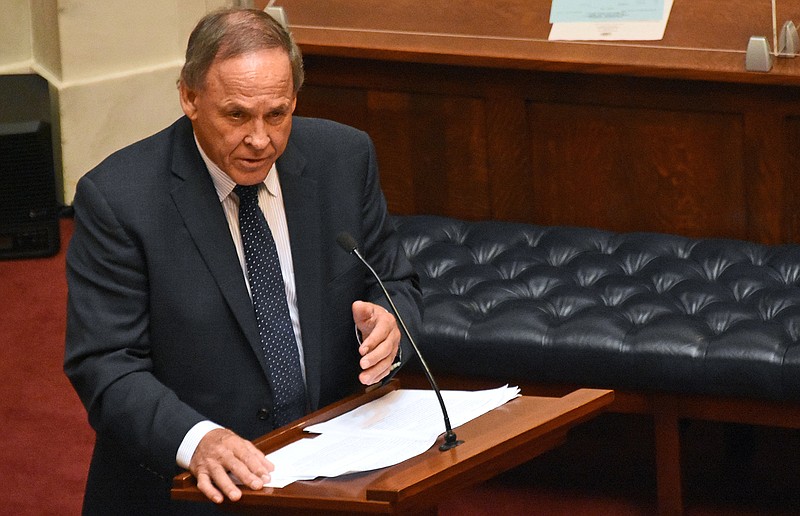 Under Sen. Gary Stubblefield’s bill, law enforcement agencies in the state would be subject to criminal penalties and fines for cooperating with federal authorities to enforce gun regulations or any other federal law that “infringes” on rights under the Arkansas Constitution. (Arkansas Democrat-Gazette/Staci Vandagriff)

The Senate voted 28-7 to approve Senate Bill 298 by Sen. Gary Stubblefield, R-Branch, sending the measure to the House for further consideration.

Twenty-seven Republicans and Democratic Sen. Larry Teague of Nashville voted for the bill. Six Democrats and Sen. Jim Hendren, an independent from Sulphur Springs, voted against it.

If enacted, the bill would be called the "Arkansas Sovereignty Act of 2021."

"All acts, law, orders, rules, and regulations of the United States Government, whether past, present, or future, that infringe on the people's right to keep and bear arms as guaranteed by the Second Amendment to the United States Constitution and Arkansas Constitution, Article 2, [Section] 5, are invalid in this state, shall not be recognized by this state, are specifically rejected by this state, and shall be considered null and void and of no effect in this state."

It would prohibit any law enforcement agencies in the state from cooperating with federal authorities to enforce federal gun law, executive order or federal agency directive that conflicts with protections for gun rights in the Arkansas Constitution or any other state law. Police in the state would be subject to criminal penalties and fines for working with federal authorities in violation of the proposed state law.

Federal laws that specifically would be declared null and void in Arkansas under SB298 include the National Firearms Act, which regulates machine guns and sawed-off shotguns, and the Gun Control Act of 1968, which regulates the interstate sales of firearms.

Some proponents of Stubblefield's legislation said they are worried that the federal government under Democratic President Joe Biden is planning to enact far-reaching gun-control policies and confiscation.

Biden's administration has proposed some new restrictions on firearm ownership, such as requiring background checks for private gun sales, but he has not proposed large-scale confiscation of guns. Recent mass slayings in other states have raised calls for further gun regulation.

Stubblefield told senators that 10 states have enacted legislation similar to his bill.

If enough states pass this legislation, the federal government might consider "we are going to have to live within the constitutional bounds," he said.

But Sen. Linda Chesterfield, D-Little Rock, said, "There is no threat to the Second Amendment."

The Second Amendment states: "A well regulated Militia, being necessary to the security of a free State, the right of the people to keep and bear Arms, shall not be infringed."

The federal government isn't going to take away people's guns, she said.

Sen. Trent Garner, R-El Dorado, countered, "It is more important now than ever that we protect our state rights.

"Once [Democrats in the U.S. Senate] get rid of the filibuster, guess what happens next? It is called packing the courts," he predicted.

Garner, who is a former aide to Republican U.S. Sen. Tom Cotton of Little Rock, said he worries about the possibility of a packed U.S. Supreme Court and if the high court justices "get the right cases, precedent, what we had for hundreds of years, will be thrown out."

It will be incumbent upon state Senates to defend "the constitutional rights of people that we represent and to make sure we are that voice in that big showing coming up" in D.C., he said.

Hendren told senators that lawmakers shouldn't ask law enforcement officers instead of the courts to make decisions on constitutionality of laws.

"It's like the 'Twilight Zone,'" he said. "I don't understand what we are doing with the constitution here."

He said delegating the determination of what's in the constitution from the courts to local law enforcement agencies because "we are unhappy with some of the federal law and regulations" doesn't comport "with our duty to uphold the Constitution."

Hendren said the bill would put the state's federal funding at risk and place law enforcement officers in a bad spot to make hard decisions and potentially damage relationships with federal officials essential to fighting crime.

Sen. Jason Rapert, R-Conway, said the bill is about sovereignty.

"You would have to be totally blind to death to not see that our nation is as divided right now as it ever has been and we have elected officials in office in Washington, D.C., who actually don't even care what the Constitution says and decided that they are going to do it their way no matter what happens and have no respect for the 10th Amendment," he said.

That amendment to the U.S. Constitution states: "The powers not delegated to the United States by the Constitution, nor prohibited by it to the States, are reserved to the States respectively, or to the people."

"Arkansas should stand up for these other states," Rapert said.

"I respect the fact that somebody has a different opinion," Elliott said. "Somebody in this state has to go start meeting on bringing us to together."

"They are not following the U.S. Constitution in Washington, D.C., right now," he said. "For the large part, they are ignoring it.

"You better get in your mind what you are going to do when you have to make that decision because there are people on record that have high contacts in government and some that are elected officials and they said, 'We are going to take your firearms from you,' and they'll do it if they can," Rice said.

"Enough states need to get together and take states' rights back," he said.

The bill has drawn opposition from the Arkansas Sheriffs' Association, whose president told a Senate committee on Tuesday that it would endanger law enforcement agencies' relationship with the U.S. authorities.

"We depend on our federal partners to chase people down in other states," said Sheriffs' Association President Scott Bradley. "We do a lot of good work with them."

SB59, by Sen. Bob Ballinger, R-Ozark, would declare that certain firearms manufactured, sold and kept within the state would not be subject to federal regulation. The measure would not apply to machine guns, black powder weapons or guns that need to be handled by at least two people.

The bill is pending action in the Senate.

Tuesday night, two additional companion bills to the Senate legislation -- House Bills 1386 and HB1435 -- were heard and rejected by the House Judiciary Committee.

As far as SB298 and SB59, Republican Gov. Asa Hutchinson said Tuesday in a written statement, "I will be reviewing the legislation in the coming days, but my first impression is that law enforcement will have significant constitutional concerns on those bills."

Hutchinson is a former U.S. attorney, among other positions. 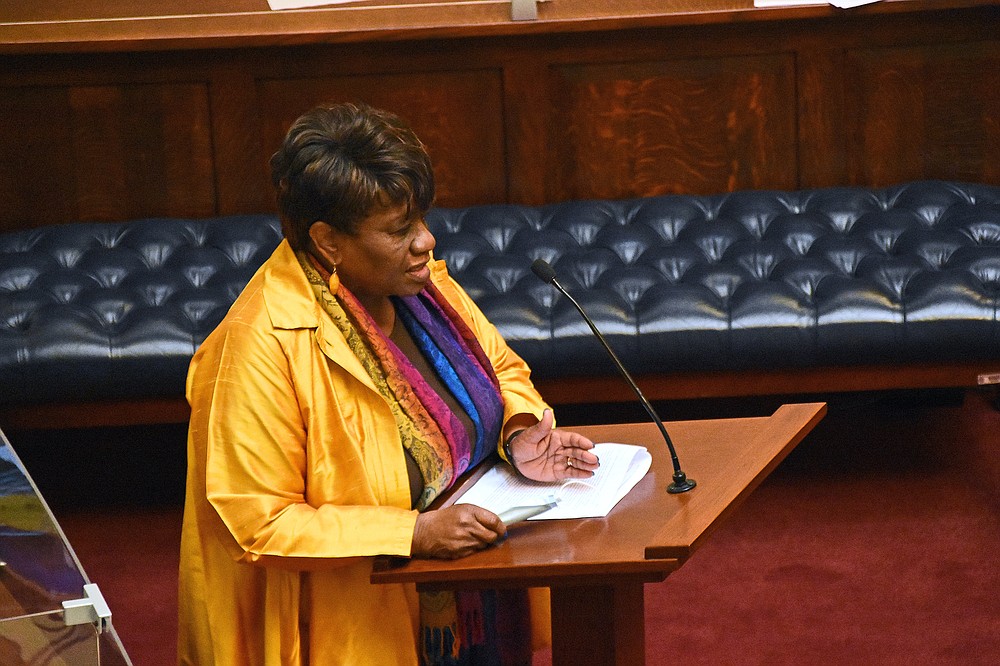 “There is no threat to the Second Amendment,” Sen. Linda Chesterfield said Wednesday in speaking against Senate Bill 298, which would be known as the “Arkansas Sovereignty Act of 202.” Senators approved the bill, 28-7. (Arkansas Democrat-Gazette/Staci Vandagriff)
ADVERTISEMENT