Fire put out at Amazon building south of Little Rock 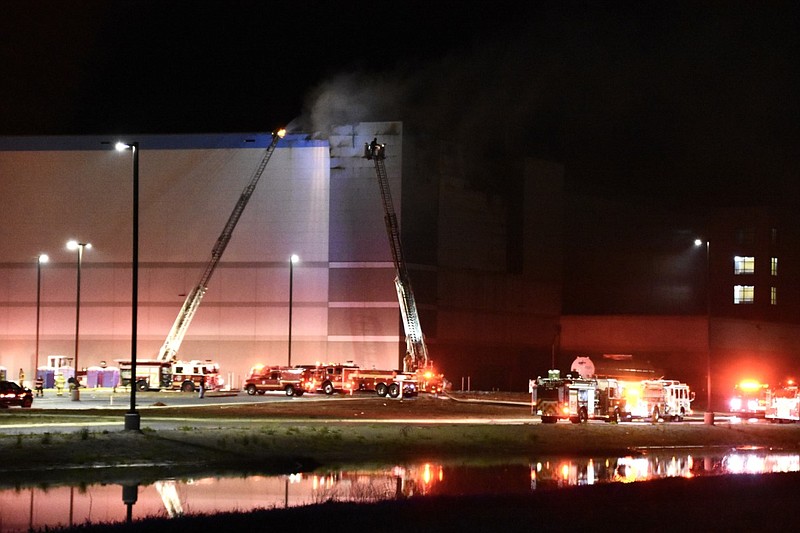 Firefighters with the Little Rock Fire Department work to put out a fire at the Amazon fulfillment center on Zeuber Road near the Port of Little Rock on Friday, April 2, 2021. (Arkansas Democrat-Gazette/Staci Vandagriff)

A building scheduled to be part of an Amazon fulfillment center caught fire Friday evening in Pulaski County south of Little Rock, according to authorities.

Pulaski County sheriff's office spokeswoman Kristin Knox said emergency services responded at 6:24 p.m. Friday to the building on 6911 Zeuber Road, about 5 miles east-southeast of the Interstate 30/Interstate 440 interchange, where Amazon representatives told authorities that the fire started in the northeast corner of the building at shift change.

[Video not showing up above? Click here to watch » https://www.youtube.com/watch?v=Fc5AmHwtDRg]

Fire could be seen leaping from the roof of the building as two cranes worked on fighting the fire. Multiple fire trucks had arrived on scene Friday night.

Officials said the fire was put out by 9 p.m. Friday. There were no injuries, according to Knox.

This story has been updated. It was originally published at 8:57 p.m.