More Arkansas pharmacies to get vaccines 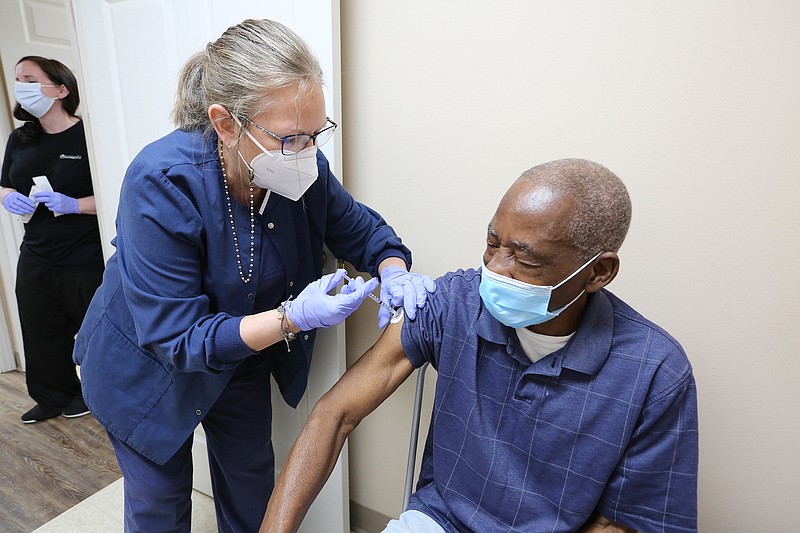 Arkansas officials learned Thursday that the number of pharmacies receiving coronavirus vaccine through a federal program is set to increase next week.

AmerisourceBergen spokesman Mike Iorfino said more than 40 Arkansas pharmacies in the network received more than 10,000 doses of Pfizer and Johnson & Johnson vaccines through the federal program this week.

A spokeswoman for Kroger didn't respond to an inquiry from the Arkansas Democrat-Gazette on Thursday.

State Epidemiologist Jennifer Dillaha said state officials also learned this week that more pharmacies than they previously knew about already had been receiving doses through the federal initiative, known as the Federal Retail Pharmacy Program for COVID-19 Vaccination.

Also on Thursday, the facilitator for a network of pharmacies that receives vaccine through the program said the stores had ordered less of the Pfizer vaccine this week than they were allotted by the federal government, in part because of a "decrease in demand."

The developments came during a continued downward trend in Arkansas' daily coronavirus case increases, with the 211 cases that were added falling well short of the increase a week earlier.

After falling a day earlier, the number of people hospitalized in the state with covid-19 rose by two,to 168.

The state death toll from the virus, as tracked by the Department of Health, rose by 10, to 5,636.

In a statement, Gov. Asa Hutchinson said the number of vaccine doses, including second doses of the Pfizer and Moderna vaccines' two-dose regimens, that had been administered compared with a day earlier set a new one-day record.

"With an increase of nearly 33,000 doses administered since yesterday, we continue to work toward the end of this pandemic," Hutchinson said.

"Check with your local vaccination locations to do your part."

Since vaccinations started in Arkansas in December, the Health Department has been in charge of coordinating the distribution of most of the doses coming into the state to hospitals, pharmacies and other providers.

On Monday, President Joe Biden announced that he would more than double the number of pharmacies receiving vaccines through the program nationwide, from 17,000 to almost 40,000, by April 19 as part of an effort to ensure a vaccination site is located within 5 miles of the homes of 90% of Americans.

In an email to the Health Department's immunization program manager on Thursday, the CDC said it will be "expanding all partners" in the program next week.

Dillaha said Health Department staff members noticed earlier in the week that some pharmacies besides Walmart's and the Community Pharmacy Enhanced Services Network stores had already been receiving vaccine doses through the federal program.

She said the Health Department also learned that more Community Enhanced Services Network Pharmacy stores had been receiving doses than it previously know about.

"We thought they were receiving it at about seven locations," but the actual number was 39, she said.

"I think we will have to adjust how we're distributing," Dillaha said. "It will allow us, I think to be able to provide vaccine to medical clinics more quickly than we had thought," and also use more doses from the state program for community vaccination events.

Arkansas Pharmacists Association CEO John Vinson said last week that the Community Pharmacy Enhanced Services Network stores were considering reducing the amount of Pfizer vaccine they order this week, in part because of a lack of demand.

He said they had seen strong demand for the single-shot Johnson & Johnson vaccine, but less for Pfizer's, which requires two shots spaced three weeks apart.

He said the stores had been allocated 14,040 Pfizer doses and 4,000 Johnson & Johnson doses for this week.

Megan Smith, the facilitator for the network in the state, said in an email Thursday that the stores reduced their Pfizer order this week "to accommodate second doses, onboarding of new pharmacies, and decrease in demand."

She didn't respond when asked how many Pfizer doses were ordered.

Despite slower-than-expected sign-ups, demand for the Pfizer vaccine turned out to be strong at a vaccine clinic Thursday at the University of Arkansas' Donald W. Reynolds Razorback Stadium in Fayetteville, Nate Green, a spokesman for the Northwest Arkansas Council said.

The business group received 2,500 doses for the event but had only about 1,400 people signed up to receive the shots as of Thursday morning.

But Green said the clinic had enough walk-in traffic to administer 2,500 doses. Because some vials had extra doses, a few dozen leftover doses will be added to the ones available at a clinic today at J.B. Hunt's headquarters in Lowell.

Only 37 of the 2,500 appointment slots for that event were unfilled as of Thursday evening.

"The strong turnout at Thursday's vaccination clinic in Fayetteville is encouraging and will help the community get back to normal," Ryan Cork, executive director of the council's health care transformation division, said in a statement.

"With support from the State, the health care community, the University of Arkansas and numerous volunteers, we were able to vaccinate 2,500 people and plan to do it again during Friday's already-full clinic at J.B. Hunt in Lowell."

The council plans to hold weekly vaccine clinics at the two locations for at least 10 weeks.

Green said that starting next week, the Fayetteville clinic will be on Wednesdays and the one in Lowell will be on Thursdays.

"The staff had worked with homeless shelters to do testing around the state," Dillaha said. "Now they have taken on vaccinations."

She said the shots are being administered by staff with the Health Department program that licenses emergency medical services providers.

Area providers licensed by the program are also helping with the effort, she said.

After discovering errors in how the numbers had been tabulated, the Health Department on Thursday lowered its tally of the total number of vaccine doses the state has received through the state program and federal programs.

It also stopped reporting separate totals for the state program and federal programs.

The number of doses that had been administered, including second doses of the Pfizer and Moderna vaccines' two-shot regimens, rose by 32,705, to 1,175,597.

According to the CDC, the number of Arkansans who had received at least one vaccine dose rose Thursday by 15,467, to 803,744, representing about 26.6% of the state's population.

Among the states and District of Columbia, Arkansas moved up from 42nd to 41st in the percentage of its residents who had received at least one vaccine dose.

It continued to rank 45th in the percentage of its residents who had been fully vaccinated.

Nationally, 30% of the population had received at least one vaccine dose, and 16.9% were fully vaccinated.

In response to Hutchinson's decision Tuesday to lift the statewide mask mandate, the health policy board of the Arkansas Center for Health Improvement issued a statement on Thursday calling on cities, schools and businesses to enact their own mask requirements.

"Arkansas's progress in containment and the extension of vaccine eligibility to all Arkansans over age 16 are critically important," the board said in the statement.

"But the presence of variants in the state that are more contagious and potentially more lethal, the observation of increases in both COVID-19 cases and hospitalizations in other regions of the U.S., and the growing public fatigue with COVID-19's impact call for renewed commitments. The lifting of the mask mandate is not an all-clear signal to abandon safeguards in our communities."

The statement calls on "business owners, school board members, faith leaders, and local elected officials" to adopt mask mandates and other measures designed to slow the spread of covid-19.

Hutchinson responded in his own statement to the Democrat-Gazette that it's "totally up to local businesses and cities as to whether any mask requirement will be adopted.

"At this stage of the Covid-19 outbreak, I support local and private sector decision making," Hutchinson said.

The increase in cases on Thursday was smaller by one than the increase a day earlier and by 123 than the one the previous Thursday, March 25.

Over a rolling seven-day period, the average number of cases added each day fell from 174 as of Wednesday to 157, its lowest level since May 28.

After rising Wednesday, the number of state virus patients on ventilators fell by one, to 26.

The cases that were added to the state's tallies included 154 that were confirmed through polymerase chain reaction, or PCR, tests.

The other 57 were "probable" cases, which include those identified through less-sensitive antigen tests.

The number of cases that were considered active rose by 29, to 1,724, as new cases outpaced recoveries.

Among prison and jail inmates, the Health Department's count of cases rose by six.

Among nursing home and assisted living facility residents, the state count of virus deaths remained at 2,064.

The number of state patients who have ever been on a ventilator with covid-19 remained at 1,584.