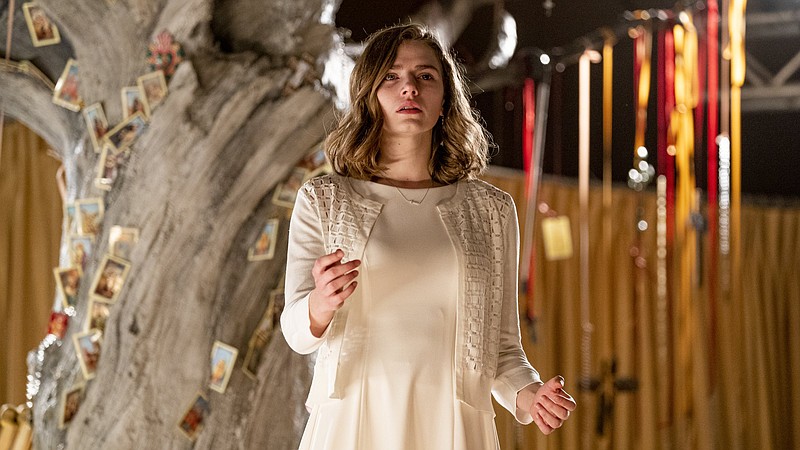 In “The Unholy,” Cricket Brown plays Alice, a young woman who believes she experiences a healing visitation from the Virgin Mary. Given that this is a horror film, it seems likely she is mistaken.

"The Unholy" opens today, and in the tradition of horror movies released theatrically on Good Friday (such as 2014's "Beaster Day: Here Comes Peter Cottonhell"), it wasn't screened for the critics who'd probably just say mean things about it anyway without deterring anyone who is determined to see a scary movie with quasi-religious elements on Easter weekend.

No harm, no foul on that; not every movie needs to be subjected to deep appraisal. Judging from the trailer, "The Unholy" looks like it might be a pretty good middleweight dream polluter. It feels fraught with Catholic dread, and there are some interesting names attached, including Sam Raimi (one of the producers), Jeffrey Dean Morgan, Cary Elwes and William Sadler, who plays the Grim Reaper in the "Bill & Ted" movies. The lead ingenue is played by fresh-faced newcomer Cricket Brown. Good luck to all of them.

Press notes indicate that "The Unholy" follows Alice (Brown), a hearing-impaired girl who, after a supposed visitation from the Virgin Mary, is not only healed but granted the power to heal others. Word gets around and people begin to seek her out in her small New England town. A "disgraced journalist" (redundant?) played by Morgan starts to snoop around. Are Alice's "miracles" the work of the Virgin, or something sinister?

What's most interesting about "The Unholy" is that it's based on "Shrine," a 1983 novel by James Herbert, a British writer who died in 2013. Herbert was often called the U.K.'s answer to Stephen King which is both apt and lazy. King and Herbert wrote scary books, and they combined elements of horror with other genres. Like King, Herbert was prolific, averaging about a book a year from the mid-'70s to the mid-'90s, after which his outputs slowed dramatically. He also sold a lot of books.

Still, Herbert's style is quite different from King's in that it admits very little nuance and only scant humor. That's not all bad for a horror writer, for what many the potential readership for such books wants is to be horrified.

That, Herbert could do. His first book, 1974's "The Rats" -- later made into the 1982 film "Deadly Eyes," which (another point of congruence with King) counted among its co-stars Scatman Crothers -- contained a scene Martin Amis (who reviewed it pseudonymously as all brave critics do) said was "enough to make a rodent retch ... and enough to make any human pitch the book aside."

Others thought more kindly of his work. King was quoted in Herbert's New York Times obituary: "Herbert was by no means literary, but his work had a raw urgency ... His best novels ... had the effect of Mike Tyson in his championship days: no finesse, all crude power. Those books were bestsellers because many readers (including me) were too horrified to put them down."

If that sounds like Herbert's books might be rich material for the movies, you will be surprised that relatively few have been made from his books. "The Fog," his second novel, published in 1975 and widely considered among Herbert's best work, has never been filmed.

Maybe because its plot, about a sentient fog that drives people insane and causes them to commit atrocities, is pretty close to the 1980 John Carpenter film "The Fog," which was (disastrously) re-made as "The Fog" in 2005, and King's 1980 novella "The Mist," which was filmed by Frank Darabont as "Stephen King's The Mist" in 2007. ("Gore ... clumsy metaphors ... a lot of computer-generated monsters that look like they escaped from a cheap 1950s horror fest," was how our critic Karen Martin summed the film up on its release.)

The best film of a Herbert book to date is probably 1995's "Haunted"; the weirdest is "Fluke," from the same year, which starred Matthew Modine as a murdered man who is reincarnated as the titular puppy and has to make his way back to his old family to protect them from his killer. (As a bonus, Samuel L. Jackson lends his voice to a valiant streetwise pooch named Rumbo who helps Fluke escape the clutches of evil Ron Perlman.)

So it won't take that much to make "The Unholy" the best film adaptation of a James Herbert book, though looking through his filmography, it's intriguing to see the 1981 Australian film "The Survivor," directed by David Hemmings (the boy soprano who went on to star in Michelangelo Antonioni's "Blow-Up" and direct "Just a Gigolo," a debacle whose star David Bowie once compared it to "32 Elvis Presley movies rolled into one").

Herbert once gave an interview to British writer and "Dr. Who" historian David J. Howe, in which he laments the sorry history of the movies made from his books.

"I sent a note to David Hemmings when I heard he was directing 'The Survivor' to offer my assistance if he wanted it -- I didn't get a reply," Herbert said. While Herbert liked "Fluke" ("a great little film") he called the others "terrible ... absolute rubbish. I can only say don't blame me."

Howe's interview with Herbert -- posted to his blog djhwriting.blogspot.com on March 21 2013, the day after Herbert died -- ends on a poignant note:

"I'd love to have a decent film," Jim muses. "That would be one ambition, to have a really good movie made of one of my books."

Maybe "The Unholy" will be the one.