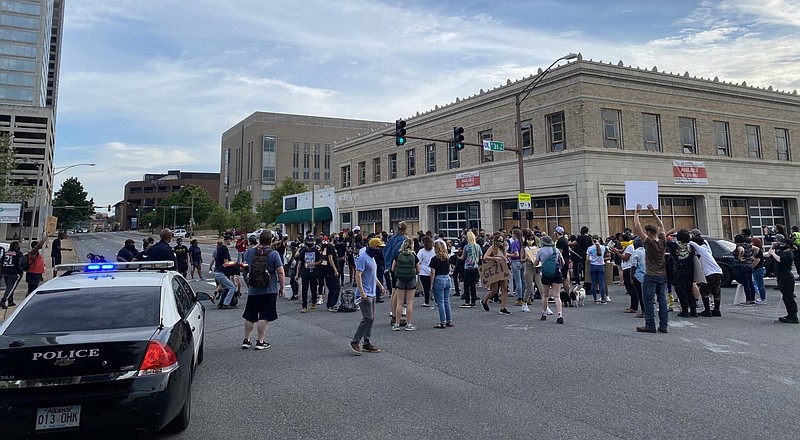 Protesters rally at the intersection of West Third Street and Broadway in Little Rock in this June 2, 2020, file photo. (Arkansas Democrat-Gazette/Joseph Flaherty)

A defendant charged with a misdemeanor offense related to his participation in a racial-justice protest over the summer was found guilty Friday in Little Rock District Court.

Judge Melanie H. Martin rejected arguments from the defense that Jordan Haas, 35, was not guilty of the charge of disorderly conduct -- specifically, obstructing vehicular traffic -- because no evidence was presented that showed Haas actually impeding traffic.

Haas had pleaded innocent. He received a 30-day suspended sentence and was fined $210.

He was arrested during a peaceful protest June 2, 2020, in which several dozen people blocked the intersection of West Third Street and Broadway in Little Rock for much of the afternoon before they were removed by police in riot gear.

During the protest, police blocked off intersections surrounding the part of the busy thoroughfare where demonstrators had gathered to route traffic away from the people.

A total of 28 people were arrested following the incident, police said at the time. The incident took place during the height of Black Lives Matter demonstrations in Little Rock following the death of George Floyd in police custody in Minneapolis.

During the trial Friday, defense attorney Michael Kaiser of the Little Rock firm Lassiter and Cassinelli moved to dismiss the case after the court heard witness testimony from two Little Rock police officials, officer Samuel Hill and Lt. Zachary Farley. Both said they were part of the Police Department's special response unit.

Hill estimated that he was at the intersection for 1½ to two hours. He said patrol units had blocked streets. Hill also told the court that Haas was among the group on Broadway.

Police were told to make arrests after the individuals were ordered to leave the area, Hill said.

Asked by Kaiser if any civilian vehicles were between the patrol cars and the protesters, Hill said no.

Farley, who described himself as one of the unit's commanders, testified that he did not personally make arrests during the incident. Five warnings with two-minute intervals in between were given to the individuals to leave the area, he said.

There was no evidence that anyone other than police were blocking vehicular traffic, Kaiser told the judge. He added that merely being inside a police roadblock did not constitute a violation of the statute.

Prosecutor C. Thomas Odom argued that the state had met its burden by hearing from police who testified that people refused to leave the roadway. The police were there for the people's safety, he said.

In his response, Kaiser said that police didn't testify that cars were forced to drive around the roadblock. Martin, however, denied his request to dismiss.

During closing arguments, Odom argued that it was clearly established that Haas was in the road and described the situation as a simple violation. Haas' conduct of remaining in the street blocked traffic, he argued.

Kaiser said the state's argument assumed facts not in evidence. No testimony was presented from any motorist or business saying they were obstructed, Kaiser said.

When explaining her guilty verdict, Martin said there was testimony from the Little Rock police officials that Haas was part of a group of people, and police inserted a barricade to keep vehicles from the area.

Haas read a statement prior to the judge delivering the sentence. He said there were more people charged from this one event than the number of local officers who have been charged with anything over several years.

He challenged Larry Jegley, the prosecuting attorney for Pulaski and Perry counties, as well as other prosecutors, to charge law enforcement officers more, not less.

Trials for two other defendants who were also among those arrested during the June 2 protest, Krystopher Stephens and Rose Nuffer, were delayed Friday because police officers called as witnesses for the prosecution failed to show up.

Martin granted continuances for both defendants' cases over Kaiser's objections, with dates set for April and May.