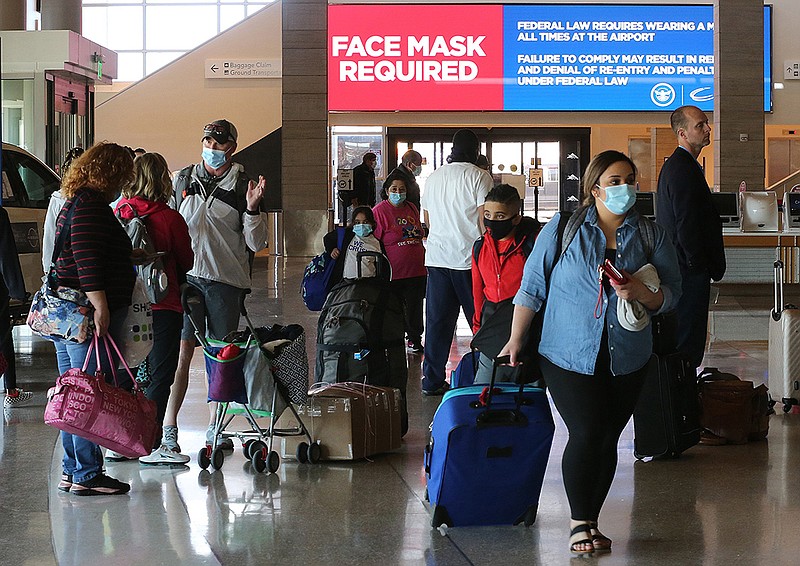 Travelers wait in line to check in for flights Friday at Bill and Hillary Clinton National Airport/Adams Field in Little Rock as the holiday weekend starts. (Arkansas Democrat-Gazette/Thomas Metthe)

The opening of vaccine eligibility to Arkansans 16 and older led to a faster pace of vaccinations this week, the head of the Arkansas State Pharmacists Association said Friday.

"Even though there are still some unfilled appointments, people I'm talking to are telling me it's still extremely busy," association CEO John Vinson said.

Meanwhile, the state's count of coronavirus cases rose Friday by 144 -- the fourth daily increase in a row that was smaller than the one a week earlier.

After rising a day earlier, the number of people hospitalized with covid-19 fell by seven, to 161, its lowest level since June 7.

The state death toll from the virus, as tracked by the Department of Health, rose by three, to 5,639.

"We continue to see declining cases in our COVID-19 numbers," Gov. Asa Hutchinson said in a statement.

"We are not increasing in cases like we see in many other states. Let's all be mindful over Easter that we must continue to guard against the spread of the virus. Get a vaccine this weekend because this helps everyone. Yesterday, we saw an increase of over 29,000 vaccine doses administered."

On Thursday, the Health Department reported 32,705 doses, including second doses of the Pfizer and Moderna vaccines' two-dose regimens, had been administered since its last update a day earlier, which Hutchinson said set a one-day record.

Before Tuesday, eligibility for vaccination had been restricted to people 65 and older, people with health conditions putting them at increased risk of severe infection, residents and workers at long-term care facilities, health care workers, people in certain essential jobs and other high-priority groups.

The vaccine doses continued to more readily available in some parts of the state than in others.

Benton County Emergency Management Director Michael Waddle said he started taking appointments midday Monday for a 1,000-dose clinic scheduled for Wednesday of next week at the county fairgrounds in Bentonville, and the slots were all filled by the end of the day Tuesday.

The event is the second of a series of weekly clinics planned at the fairgrounds auditorium on Barron Road.

Waddle said he also started taking appointments Monday for the third clinic, scheduled for April 14, and at least 300 people had signed up by Friday.

"We're still seeing a demand here, which is something I'm keeping a close eye on," Waddle said.

By contrast, Southern Pharmacy announced on its Facebook page last weekend that it would start accepting walk-in patients this week at its vaccination clinic in Jonesboro.

Owner Kyle Lomax said the chain still requires appointments at its stores in Marked Tree, Leachville, Lepanto, Monette and Lake City, but someone signing up would be able to get a shot within "a couple days."

"There's plenty of vaccine," Lomax said. "It's just getting people to get in and get vaccinated."

A slight exception is the single-shot Johnson & Johnson vaccine, which has been in shorter supply than the Pfizer and Moderna vaccines.

Lomax said he used up his Johnson & Johnson doses this week and won't start taking more appointments for it until next week, when he confirms how much he'll be getting.

Statewide, the doses of Johnson & Johnson going to providers participating in the state vaccination program are set to increase from 17,200 this week to 43,500 next week.

In Little Rock, Remedy Drug owner Philip Way said he had at least 100 people on a waiting list for Johnson & Johnson when he got his first shipment three or four weeks ago.

Now, he said his earliest appointment slots for that shot are for April 22.

"If you want a shot, I think you can get whichever one you want if you're willing to be patient," Way said.

He said the reasons some people prefer the Johnson & Johnson vaccine include the convenience of only one dose, a familiarity with the company and the more traditional technology used by the vaccine.

Some people are also allergic to polyethylene glycol, an ingredient in the Moderna and Pfizer vaccines.

Vinson said pharmacies belonging to the Community Pharmacy Enhanced Services Network were allocated 14,040 doses of Pfizer vaccine for this week through a federal program, but only ordered about half that amount because of a lack of demand and other factors.

Megan Smith, the network facilitator, said she's been working to enroll more of the network's pharmacies in the federal program and expects the pharmacies' order next week to be bigger.

"I fully expect to be able to cash out and use every single dose that we can, if not all this week, then definitely between this week and the following week," Smith, an assistant professor of pharmacy practice at the University of Arkansas for Medical Sciences, said.

Vinson said he's heard that demand for the shots is particularly strong among teenagers and adults up to age 22.

The Pfizer vaccine is authorized for people 16 and older, while the Moderna and Johnson & Johnson vaccines are allowed for those 18 and older.

For those who want the Pfizer vaccine, CHI St. Vincent Community Care-East Clinic in Little Rock will hold its second walk-in clinic from 9 a.m. to noon today.

CHI St. Vincent spokesman Joshua Cook said enough doses will be available to provide 1,500 people with their first Pfizer shots. The clinic also will be administering second doses to 810 people who received their initial shots on March 13 at the facility's first walk-in clinic.

The state reported that 74.1% of the 1,432,150 doses received by providers participating in its vaccination program had been administered.

Of the 324,650 doses received through federal programs, 44.2% had been administered.

According to the U.S. Centers for Disease Control and Prevention, the number of Arkansans who had received at least one vaccine dose rose by 18,860, to 822,604, representing about 27.3% of the state's population.

Among the states and District of Columbia, Arkansas continued to rank 41st in the percentage of its population who had received at least one vaccine dose.

It fell from No. 45 to No. 46 in the percentage of its residents who had been fully vaccinated.

Nationally, 30.7% of people had received at least one vaccine dose and 17.5% had been fully vaccinated.

The increase in cases on Friday was smaller by 67 than the one a day earlier and by 40 than the one the previous Friday, March 26.

"It gives me a lot of pleasure to go into the weekend having seen those numbers," she said.

She said only one of the deaths reported Friday happened within the past month. Of the others, one occurred in January, and the other was in February.

Already at its lowest level since late May, the average number of cases added in the state over a rolling seven-day period fell by almost six, to 151.

After rising Thursday, the number of cases that were considered active fell by 40, to 1,684, its lowest level since May 25.

The number of state virus patients on ventilators remained unchanged, at 26.

The cases that were added included 89 that were confirmed through polymerase chain reaction, or PCR, tests.

The other 55 were "probable" cases, which include those identified through less-sensitive antigen tests.

The Health Department didn't report any increase in its count of cases among prison or jail inmates.

The state death toll rose by three, to 4,492, among confirmed cases and remained at 1,147 among probable cases.

Among nursing home and assisted living facility residents, the count of virus deaths rose by one, to 2,065.

The number of state virus patients who have ever been on a ventilator rose by one, to 1,585.