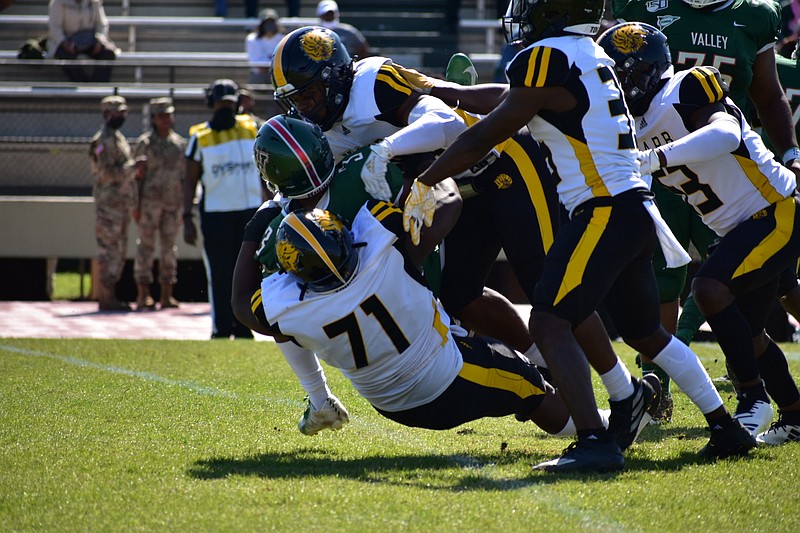 ITTA BENA, Miss. -- Exactly how long ago the University of Arkansas at Pine Bluff football team last won the first three games of a season is hard to figure out.

Records between the 1983 and 1999 seasons for UAPB, which transitioned from NCAA Division II to the National Association of Intercollegiate Athletics and then to NCAA Division I during that time, were not available. The Golden Lions had started 2-0 for the first time since the 2000 season, but on Saturday, they took that mark up a notch.

A 75-yard punt return by Tyrin Ralph put the Lions ahead for good with 1:54 remaining in a 24-17 win over archrival Mississippi Valley State University at Rice-Totten Stadium, partly named after Pro Football Hall of Famer Jerry Rice. UAPB (3-0 overall and in the Southwestern Athletic Conference) now stands one victory away from clinching a spot in the May 1 championship game.

"There's a lot of football to go," Lions Coach Doc Gamble said. "Our big deal is to start every game 1-0 each week. We accomplished that this week, and we'll focus on the next opponent when that week comes. But right now, the most important thing is taking care of ourselves this upcoming week."

UAPB will have an open date next weekend.

Saturday's victory did not come without a high number of penalties against UAPB.

"A lot of it was just hurting ourselves," Gamble said. "We had a lot of penalties outside of the pocket. ... That makes it tough on our offense, but the other thing [is] we've got to get our running game started."

The Golden Lions' defensive unit keyed in on Valley's rushing attack in the early going, although Caleb Johnson broke a 50-yard run to tie the game in the fourth quarter. When the host Delta Devils (1-2 overall and in SWAC) got the ball back with a 3-0 lead midway through the first quarter, Lions junior nose guard Zion Farmer went to work to contain Johnson.

"We knew they had a few good backs, so coaches were going over film and telling me it was coming," Farmer said. "That gave me good looks."

After Ralph's go-ahead return -- and after both teams traded turnovers -- the Lions had to go back on defense one more time, but they got the stop needed to win.

"We all face adversity. We just had to get back in the game and tighten up and buckle down," Farmer said.

The Lions gained their seventh and eighth takeaways of the season Saturday.

Punter Josh Sanchez recovered a fumbled punt return late in the second quarter. That allowed the Lions to extend what would be an 18-play, 75-yard drive taking up 6 minutes, 28 seconds and ending in an 18-yard Zack Piwniczka field goal.

The latest turnover UAPB pounced on was Jacory Rankin's cough-up of the kick return after Ralph's touchdown.

The game changed when ...

Valley free safety Caleb Brunson intercepted Skyler Perry and returned it to midfield in the fourth quarter. The very next play, Johnson broke a 50-yard run up the middle to tie the game at 17-17 with 7:55 remaining.

UAPB had led 17-3 at one point. It later went ahead for good on Ralph's punt return.

Ralph, who consistently made kickoff and punt returns that put the Lions in good field position.

"He took some hits, but he's fearless," Gamble said. "He plays with a big heart, and he plays hard."

UAPB has next weekend off before returning to action to host Prairie View A&M. Kickoff is at 3 p.m. April 17 at Simmons Bank Field. 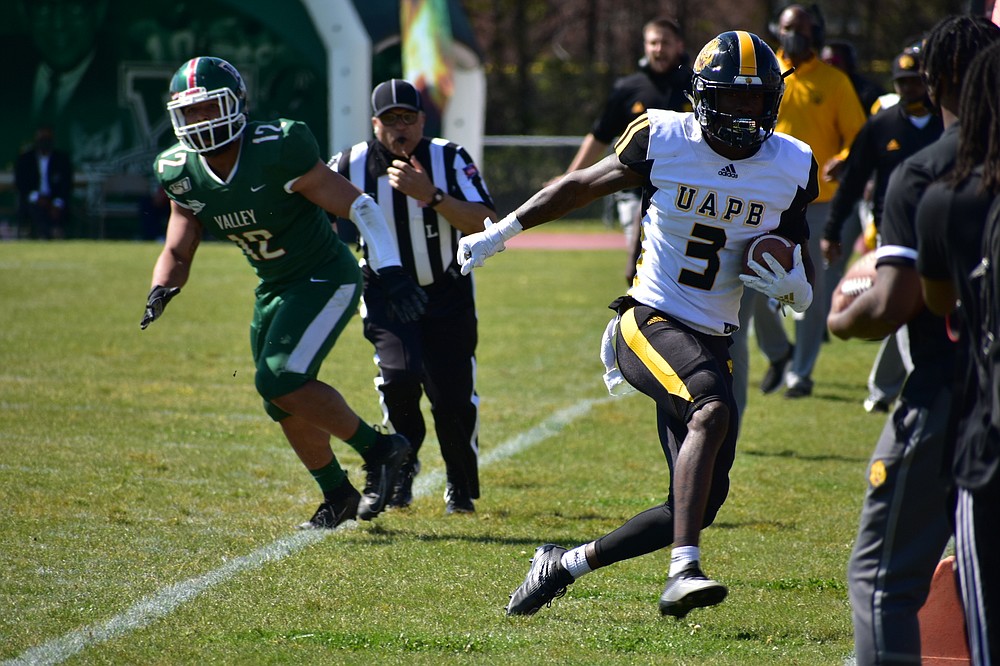 UAPB wide receiver Josh Wilkes (3) runs out of bounds after tightroping the sideline on a catch for first down against V.J. Swanier of Mississippi Valley State during the first quarter Saturday, April 3, 2021, at Rice-Totten Stadium in Itta Bena, Miss. (Pine Bluff Commercial/I.C. Murrell)
ADVERTISEMENT