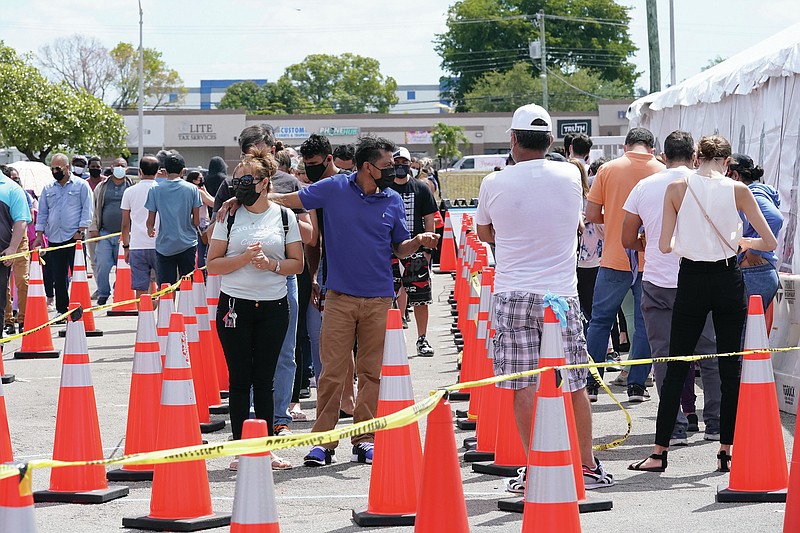 People wait in line to receive a COVID-19 vaccine at a FEMA vaccination center at Miami Dade College, Monday, April 5, 2021, in Miami. Any adult in Florida is now eligible to receive the coronavirus vaccine. In addition, the state announced that teens ages 16 and 17 can also get the vaccine with parental permission. (AP Photo/Lynne Sladky)

NEW YORK -- The Norwegian Cruise Line on Monday sought permission from the Centers for Disease Control and Prevention to resume trips from U.S. ports in July after the agency last week released updated technical guidance.

On Friday, the CDC updated its guidance to say that fully vaccinated people can travel within the U.S. without getting tested for the coronavirus or going into quarantine afterward. It also issued more technical details on its conditional plan to allow cruise ships in U.S. ports, but it did not say when cruise lines could resume sailing.

[Video not showing up above? Click here to watch » https://www.youtube.com/watch?v=7vgIroSm_oU]

Cruise ships in the United States have been docked for more than a year because of the pandemic and can only restart operations by following the CDC's Framework for Conditional Sailing Order, issued in October to ensure that cruise ships build the onboard infrastructure needed to mitigate the risks of the coronavirus.

The technical instructions will allow cruise lines to prepare their ships for simulation voyages, designed to test health and safety protocols and operational procedures with volunteers before sailing with paying passengers.

The new recommendations include increasing from weekly to daily the reporting of covid-19 cases, implementing routine testing of all crew members based on a ship's covid-19 status and making contractual arrangements with medical facilities onshore for passengers who may fall ill during a voyage.

Once cruise lines have prepared their ships, they must give 30 days' notice to the CDC before starting test cruises. They will have to apply for conditional sailing certificates 60 days before their planned regular voyages.

The Miami-based company said its precautions go well beyond steps taken by other parts of the travel and leisure industry that have already reopened, including airlines, hotels, restaurants and sporting events.

Still, Walensky urged caution and said she would "advocate against general travel overall" given a rising number of infections.

The CDC said Monday that it "is committed to working with the cruise industry and seaport partners to resume cruising" after a phased approach. "Cruising safely and responsibly during a global pandemic is difficult," especially with concern over new variants of covid-19, the agency added.

An industry trade group, the Cruise Lines International Association, blasted the CDC's updated guidance and called for the agency to lift its no-sail order.

"The new requirements are unduly burdensome, largely unworkable, and seem to reflect a zero-risk objective rather than the mitigation approach to covid that is the basis for every other US sector of our society," the group said. It said the CDC's requirements are hurting nearly half a million American workers at businesses that service cruise ships, "with no reasonable timeline provided for the safe return of cruising."

Additionally, the CDC on Monday updated its guidance on the daily disinfection of indoor environments to prevent the spread of the coronavirus, saying that disinfecting chemicals such as ammonia and bleach need be used only within 24 hours of an infected person being there.

The updated guidance applies to homes, schools and other settings that are not hospitals or health care facilities.

Last summer, the agency recommended that strong disinfecting chemicals be used daily to prevent the spread of the virus in classrooms. Earlier this year, the CDC posted documents meant to deemphasize disinfection on such a regular schedule.

Meanwhile, the British government announced Monday that it will offer every citizen in England two at-home rapid coronavirus tests a week in a bid to reopen the economy while avoiding another wave of infections.

Prime Minister Boris Johnson is betting that relentless, repeated testing for as many people as possible -- including those without symptoms -- will help break transmission chains, limit future outbreaks and get people back to work, sporting events, theaters and normal life.

The country's fast-moving vaccination campaign has administered at least one dose to nearly half the population, but adults under 50 in England could still be waiting until May for their first shots, and scientists don't yet know how easily vaccinated people can transmit the virus. So the ability to test and trace is still seen as critical to keeping the virus in check.

The prime minister promised the free, simple tests will help "to stop outbreaks in their tracks, so we can get back to seeing the people we love and doing the things we enjoy."

The government said free lateral flow tests will be available starting Friday by mail, from pharmacies and in workplaces.

Lateral flow tests give results in minutes but are less accurate than the swab tests used to officially confirm cases of covid-19. But the government insists they are reliable and will help find people who contract the virus but don't have symptoms.

Johnson also said Monday that Britain's march out of a three-month lockdown remains on track even as coronavirus cases surge elsewhere in Europe, and he confirmed that businesses such as barbers and bookstores will be allowed to reopen next week.

The prime minister said it's too soon to decide, however, whether U.K. residents will be able to have summer trips abroad. He confirmed that the government will test out a contentious "vaccine passport" system -- a way for people to offer proof they have protection from covid-19 -- as a tool to help travel and large events return safely.

Four weeks after England took its first step out of lockdown by reopening schools, Johnson said the vaccination program was proceeding well and that infections were falling. He said the next step would come as planned next Monday with the reopening of hairdressers, beauty salons, gyms, nonessential shops and bar and restaurant patios.

"We set out our road map, and we're sticking to it," Johnson said during a news conference.

But, he added, "We can't be complacent. We can see the waves of sickness afflicting other countries, and we've seen how this story goes."

A ban on overnight stays away from home in England will also be lifted next Monday, and outdoor venues such as zoos and drive-in cinemas can operate again.

Scotland, Wales and Northern Ireland are following similar but slightly different paths out of lockdown.

Other European countries scrambled Monday to tamp down a surge in covid-19 cases and ramp up vaccinations, hoping to spare hospitals from becoming overwhelmed by the pandemic's latest wave of infections.

The more contagious and more aggressive virus variant identified in Britain is fueling much of the increase in Europe. Meanwhile, people in many countries are angry at the European Union's strategy but also at their own governments' handling of the pandemic and the failure to prevent repeated spikes in infections.

France's health minister, Olivier Veran, warned Monday that the number of covid-19 patients in the country's intensive care units might match the level of the first crisis a year ago.

Speaking on TF1 television, he said the country could approach the saturation levels of April 2020 when French ICUs held more than 7,000 virus patients, many of whom were in temporary facilities because demand far outstripped the country's pre-pandemic capacity.

Veran expressed hope that France's new infections could peak this week thanks to partial lockdown measures. After long resisting calls for a new lockdown, the French government closed schools and all nonessential stores nationwide and imposed travel restrictions for four weeks.

"We will manage," Veran said.

Authorities in Ukraine's capital, Kyiv, introduced tighter lockdown restrictions after a recent spike in virus cases. All schools in the city of 3 million people will be closed for the next two weeks, and only people with special passes will be allowed on public transport.

Elsewhere, North Macedonia has delayed mass immunization amid vaccine shortages as its hospitals fill up after record covid-19 infections and deaths last week.

In Greece, which is struggling to emerge from a deep recession, most retail stores were allowed to reopen Monday despite an ongoing surge in covid-19 infections. Lockdown measures have been in force since early November, although shops opened briefly around the Christmas season. The prolonged closures piled pressure on the economy.

Serbia also has eased measures against the coronavirus despite high numbers of infections and a slowdown in vaccinations. The government on Monday allowed bars and restaurants to serve guests outside at reduced capacity and with respect of social distancing rules.

The crush of coronavirus patients has been relentless for hospitals in Poland, where daily new infections hit records of more than 35,000 on two recent days and the government ordered restrictions to prevent large gatherings over the long Easter weekend. On Sunday, coronavirus patients filled almost all of the 120 beds at the County Hospital of Bochnia, 25 miles east of the southern city of Krakow.