Police pledged $3,000 for sticking with city 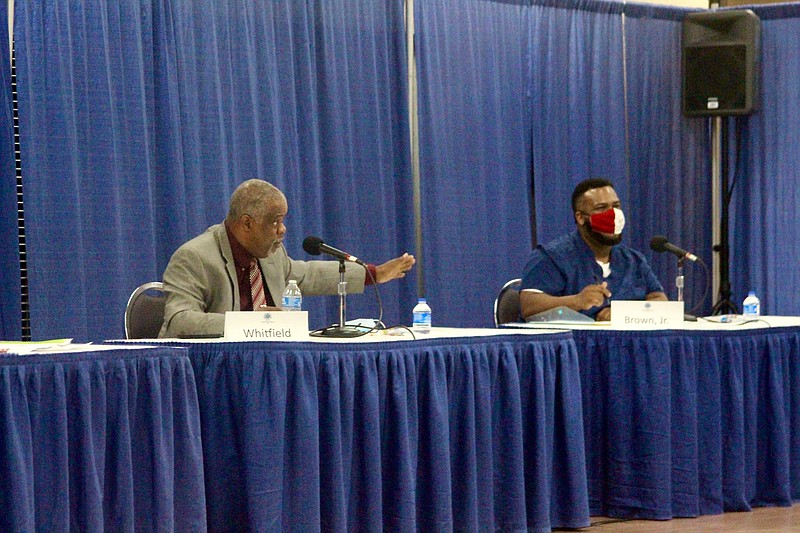 Pine Bluff police officers will receive a financial incentive at the end of the year if they remain employed with the city of Pine Bluff.

The resolution laying out details of the bonus passed Monday night at the Pine Bluff City Council meeting as a way to combat the shortage in police officers by providing service bonuses of $3,000 to any officer still employed between Dec. 15-31 with at least one year of service.

A bonus of $1,500 will be paid to part-time officers and all other officers who have less than one year of service as of Dec. 31.

The resolution was sponsored by City Council Member Ivan Whitfield, who proposed it during the Public Safety Committee meeting in March. The resolution failed to win the approval of that committee, of which Whitfield is not a member.

Committee members Joni Alexander and Chairman Glen Brown Jr. voted to send the proposal to the council with a "do not pass" recommendation.

At Monday's meeting Brown, explained why he recommended a no vote on the proposal.

"There was no consultation with the chief nor with the Public Safety Committee before this resolution was created at that time," said Brown. "We've already been talking to the chief about a possible compensation package that would address more issues within the police department."

Brown said the details of the resolution were never discussed and his committee was already in the process of composing a comprehensive plan that would address not just salaries but also other important issues.

"Wait and let the committee, the chief and the mayor come up with a better plan on how to compensate officers in the future," Brown said to Whitfield.

Whitfield said his attempt to move forward was based on his concern over the steady decline in police officers. When asked last month by Brown to pull his resolution, Whitfield declined because of the state of emergency he felt the police department was in.

Whitfield said the department has approximately 99 police officers patrolling out of a possible 132.

"We are in a state of emergency and we sit here acting as if it's OK, and it's not OK, because even on Sundays now we're having major issues in the park that's going to take some officers off the streets to do that, to try to eliminate people from bringing weapons and other things to the park," said Whitefield.

"This legislation is not saying it's going to stop everyone from leaving. It's not, but this chief and the next chief should have some type of strong staff, and the way these officers are leaving it's not going to be that way," he said.

Brown said that as the chair of Public Safety, he felt his committee should have handled the the issue in collaboration with the chief of police and Mayor Shirley Washington.

"You're chair of Public Works, so what makes you say I'm going to make a decision for the police department on my own and create legislation," Brown said to Whitfield. "Your plan is not everyone else's plan, and we told you then that we were working on a plan, but that was not good enough for you."

Alexander said she didn't have an issue with giving the officers a bonus. Instead, her issue was that the proposed resolution was premature and should be part of a more comprehensive plan.

"There are more issues going on at that PD. We have internal issues. The morale is down, especially since detective [Kevin] Collins passed, and if you look at when we've given the major raises in the past two to three years, we've lost more officers," said Alexander. "It's not just a salary issue, and nationally it's not as cool to be a police officer anymore, and I wish we could have these conversations."

Alexander said now was the time to be honest about the real issues because the police officers are tired, stressed, overworked and underpaid.

Council Member Bruce Lockett said it was hard for him to sleep well at night due to the situation of the Pine Bluff Police Department.

"I know there is a lot of transitions with leadership and a whole bunch of stuff, but it's a lot of overworked people out there that are trying to protect the citizens. I got to support this," said Lockett.

He said it was disheartening that real public conversations couldn't be had in detail.

"If we really talk about things that are really happening in our police force and things that we need to change, it would send such a terrible message throughout the community that we don't even want to expose that," said Lockett.

Whitfield said the move was a statement to the officers: "Stay with us until December and we will give you a bonus."

"This is nothing new. It's being done all across the country trying to keep their public safety there, among other things," said Whitfield. "It's needed and it's the right thing to do."

The resolution passed 6-2, with Brown and Alexander the only no votes.

In a follow-up interview, Alexander said she voted against the resolution not only because she felt it was premature but also because there were other flaws in the city that needed to be addressed.

"I've always felt like our issue with crime in Pine Bluff is bigger than the police department," said Alexander.

Another resolution proposed by Whitfield to increase the hourly rate of part-time police officers to $15 an hour from about $13 an hour was also passed 6-2, with Brown and Alexander voting no.

According to the resolution, the increase should encourage part-time officers to remain with the city and promote the recruitment of others.