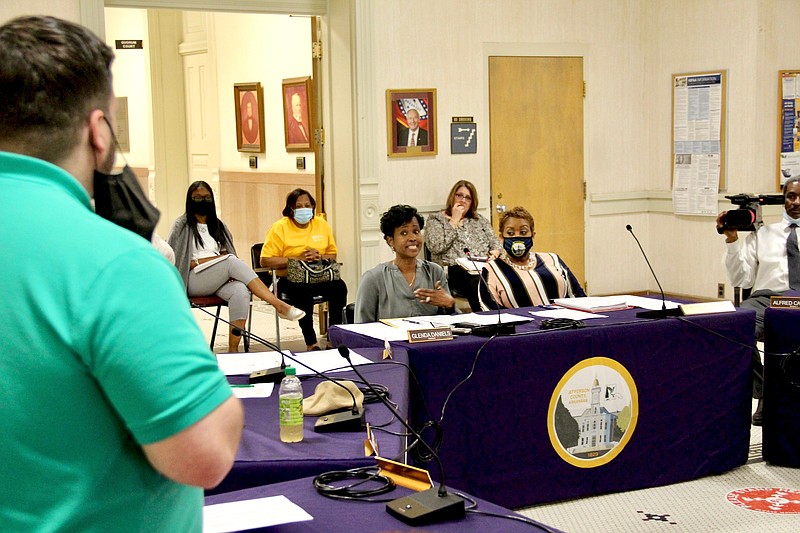 Justice of the Peace Glenda Daniels tells Chief Deputy Joseph Gorman that she didn't approve of a request by the sheriff's office to add exempted positions to the hiring freeze ordinance in order to avoid having to go through the Quorum Court. (Pine Bluff Commercial/Eplunus Colvin)

His request was placed on the Public Safety Committee agenda for the committee meeting held on March 2 but was pulled on the night of the meeting.

In Lafayette's absence on Tuesday, Jail Administrator and Chief Deputy Joseph Gorman was there to ask that several positions, including maintenance, maintenance supervisor, registered nurse, teacher, paraprofessional, bookkeeper, and clerk within the Sheriff's Office, the Adult Detention Center, the Juvenile Justice Center and the Juvenile Education, be added as exempt to the current hiring freeze so that the sheriff would not have to come through the Quorum Court to ask for these positions if they needed to be filled.

"Within our various facilities and budgets, there are positions that we assert are critical to health and safety, are necessary to satisfy a legal mandate (standards, rules, and regulations), are necessary for efficient and cost-effective operation, and/or funded by either a grant or other dedicated revenue source," said Woods in a March 22 letter to Robinson asking that Jefferson County Ordinance No. 202 l-12 Article I be amended.

But that argument did not get much traction with members of the Jefferson County Quorum Court.

Daniels said she felt that the positions, although important, were not emergency positions and if the sheriff's office found itself in an emergency situation and needed to hire someone quickly, a special meeting could be held.

Gorman said the request was made as a precautionary measure in case someone quit.

"If all three of our cooks decided to quit today we would have to wait a month," said Gorman, who added that the sheriff's office had a constitutional duty and wanted to avoid possible lawsuits if the positions were not filled in a timely matter. "We're not trying to overpass you all. We just don't want to have to wait a month because these positions are critical to our operations."

According to Gorman, only the secretary position had someone identified to fill the slot. All the other positions had not been identified with a candidate and the maintenance and cook positions had been vacant for over a year.

Judge Gerald Robinson suggested the duties be shared and performed by county personnel.

"If we continue to add exemptions to the ordinance, well then pretty much every elected official is going to want you to come back and add a clerk or whatever to be exempt from the hiring freeze," said Robinson.

One of these employees would be someone to assist the environmental enforcement officer who is constantly going out to investigate illegal dumpsites and is now weighing logging trucks to see whether they are overloaded, resulting in fees and collections.

The second position will be a helper with the Sanitation Department's billing department.

Since January, four water companies decided not to bill and collect for the county, leaving only two companies, Liberty Utilities and Wright Pastoria Water Association, on board.

With the county still waiting on Harding Water's response, the responsibility of billing and collecting has fallen on the Judge's Office going from billing 500 customers to 7,493.

"When they decided not to renew, that left us with a collection of almost 7,000 people and right now that assignment is given to my administrative secretary," said Robinson. "It's almost impossible for one person to take on that task. She is, to say the least, very stressed in taking this on. To put it simply, she needs help."

The ordinance passed and will be sent to the full Quorum Court.