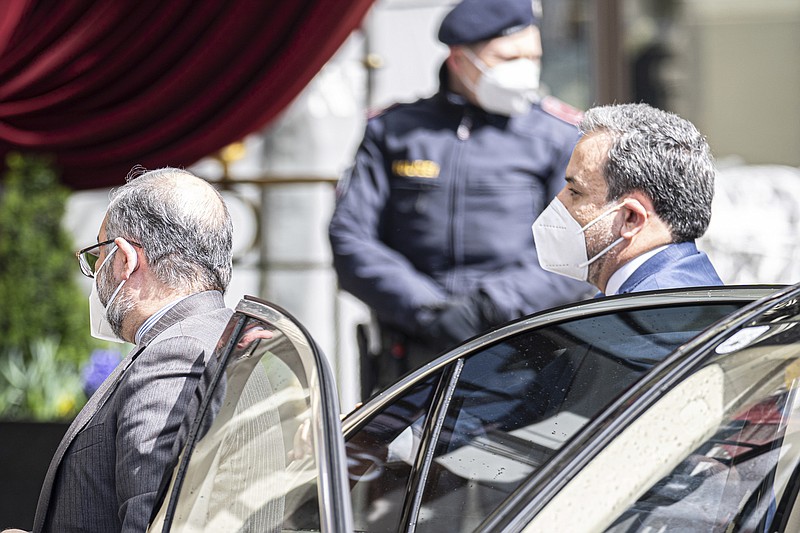 Political deputy at the Ministry of Foreign Affairs of Iran, Abbas Araghchi, right, arrives at the Grand Hotel Wien where closed-door nuclear talks with Iran take place in Vienna, Austria, Tuesday, April 6, 2021. Foreign ministry officials from the countries still in the accord, the so-called Joint Comprehensive Plan of Action, are meeting in Vienna to push forward efforts to bring the United States back into the 2015 deal on Iran's nuclear program. (AP Photo/Florian Schroetter)

BRUSSELS -- The United States and Iran agreed through intermediaries Tuesday to establish two working groups to get both countries back into compliance with the 2015 Iran nuclear deal.

In a meeting of the current members of the deal in Vienna, all parties agreed to establish one working group to focus on how to get the United States back to the deal by lifting harsh economic sanctions imposed or reimposed after President Donald Trump pulled out of the accord in May 2018.

The other working group will focus on how to get Iran back into compliance with the accord's limitations on nuclear enrichment and stockpiles of enriched uranium.

[Video not showing up above? Click here to watch » https://www.youtube.com/watch?v=6CkqWR5poh4]

The two groups have already begun their efforts, according to Mikhail Ulyanov, the Russian representative who is ambassador to international organizations in Vienna.

Ulyanov called Tuesday's meeting of the joint commission on the Iran deal an initial success.

But in a Twitter message, he cautioned that restoration of the deal "will not happen immediately. It will take some time. How long? Nobody knows. The most important thing after today's meeting of the Joint Commission is that practical work toward achieving this goal has started."

President Joe Biden has vowed to bring the United States back into the deal, which would mean removing the 1,600 or so sanctions imposed on Iran after Trump pulled out of an accord he regarded as too weak and tried to bring Iran to renegotiate through economic pressure. In part because of those sanctions, the European signatories failed to provide the economic benefits Iran was due. After about a year, in 2019, Iran began to violate the enrichment limits of the accord.

United States officials estimate that Iran's "breakout time" -- the time necessary to assemble enough highly enriched uranium for a nuclear weapon -- is now down to a few months.

In the latest announced violation, Behrouz Kamalvandi, a spokesman for Iran's civilian nuclear program, said officials had begun mechanical testing of an IR-9 prototype centrifuge. That centrifuge would enrich uranium 50 times faster than the IR-1s allowed under the accord, he said, according to the semi-official Iranian Students' News Agency.

In Vienna, Iran met with the other current members of the deal -- Britain, China, France, Germany and Russia, under the chairmanship of the European Union -- in a grand hotel ballroom, while the American team, led by special envoy Robert Malley, worked separately in a nearby hotel. Iran has refused to meet directly with the United States, so the Europeans have been undertaking a kind of shuttle diplomacy.

The United States also wants to persuade Iran to negotiate longer time limits for the accord and to begin further talks on limiting Iran's missiles and support for allies and Shia militias through the region, including in Syria, Iraq and Lebanon. Iran has said it has no interest in considering further negotiations until the United States restores the status quo ante and rejoins the deal.

More broadly, American officials are trying to gauge whether the United States and Iran can agree on how each can come back into compliance with the nuclear deal -- or, at least, work toward bridging any gaps in a mutual understanding.

Iran was represented by Abbas Araghchi, the deputy foreign minister, who was crucial to negotiating the 2015 deal, known formally as the Joint Comprehensive Plan of Action, with the administration of President Barack Obama and Biden, then vice president.

Araghchi said in a statement after the talks that lifting U.S. sanctions would be "the first and most necessary step in reviving the deal. The Islamic Republic of Iran is fully ready to stop its retaliation nuclear activity and return to its full commitments as soon as U.S. sanctions are lifted and verified."

Speaking with Iran's state television, Araghchi said, "I can say overall that it was a constructive meeting."

On Monday, an Iranian government spokesman, Ali Rabiei, said President Hassan Rouhani and the Supreme Leader, Ayatollah Ali Khamenei, were in agreement about nuclear talks. "Everything can happen really quickly in a series of independent but connected synchronized steps," Rabiei said, according to official Iranian media.

Enrique Mora, who led Tuesday's session for the European Union, called the meeting "constructive," adding: "There's unity and ambition for a joint diplomatic process with two expert groups on nuclear implementation and sanctions lifting." As the coordinator of the commission, he said, "I will intensify separate contacts here in Vienna with all relevant parties, including the U.S."

Speaking Monday, a State Department spokesman, Ned Price, said talks will be structured around working groups that the Europeans will form with the other parties to the accord. He called the talks a "healthy step forward" but added that "we don't anticipate an early or immediate breakthrough, as these discussions, we fully expect, will be difficult."

The clock is ticking on trying to get the U.S. back into the deal, with the goal of returning Iran to compliance, with a number of issues to consider.

In late February, Iran began restricting international inspections of its nuclear facilities, but under a last-minute deal worked out during a trip to Tehran by Rafael Grossi, the head of International Atomic Energy Agency, some access was preserved.

Under the agreement, Iran will no longer share surveillance footage of its nuclear facilities with the agency but it has promised to preserve the tapes for three months. It will then hand them over to the agency if it is granted sanctions relief. Otherwise, Iran has vowed to erase the recordings, narrowing the window for a diplomatic breakthrough.

Iranian Foreign Minister Mohammad Javad Zarif in March also urged the U.S. to act quickly, noting that as his country's June elections approach, Washington will find itself dealing with a government unable to make progress in the nuclear talks.

In addition, one of the nuclear deal's major so-called sunset clauses, a United Nations arms embargo on Iran, expired last year and others are set to expire in the coming years.

White House press secretary Jen Psaki said she would not predict how long the talks would run or whether they can be concluded ahead of the elections in Iran that may change the landscape for Iranian participation.

The indirect structure, with European powers serving as go-betweens, "is still, in our view, a step forward toward diplomacy, and that remains our first objective," Psaki said.

Zarif on Friday reiterated Iran's position that no additional talks on the deal are needed, since the deal and its parameters have already been negotiated.

"No Iran-US meeting. Unnecessary," he tweeted.

The Joint Comprehensive Plan of Action commission was expected to meet again Friday, and in the meantime, Mora said he would be reaching out individually to all sides.

"As coordinator I will intensively separate contacts here in Vienna with all relevant parties, including U.S.," he tweeted.

U.N. spokesman Stephane Dujarric, asked for Secretary-General Antonio Guterres' reaction to the meetings, said: "We welcome all of these efforts by the [Joint Comprehensive Plan of Action] participants ... to hold constructive dialogue. We hope this is a first step in the right direction."

Information for this article was contributed by Steven Erlanger of The New York Times; by David Rising, Alex Schuller, Geir Moulson, Jon Gambrell, Edith M. Lederer and Amir Vahdat of The Associated Press; and by Loveday Morris, Anne Gearan and Kareem Fahim of The Washington Post.