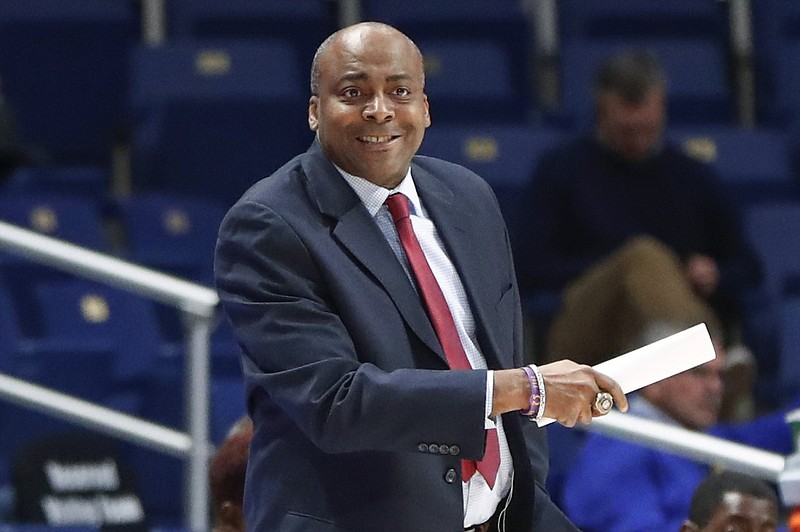 Arkansas-Pine Bluff coach George Ivory talks to the officials as his team plays against Pittsburgh during the first half of an NCAA college basketball game Thursday, Nov. 21, 2019, in Pittsburgh. Pittsburgh won 66-41.(AP Photo/Keith Srakocic)

After 13 seasons as the men's basketball coach at the University of Arkansas-Pine Bluff, George Ivory is turning in his whistle.

The Mississippi native resigned Tuesday, citing the need to move on after spending 17 years with the Golden Lions.

The school announced that it will conduct a national search for Ivory's successor.

"It has been an honor and privilege to be the head coach at UAPB and guide the young men who I was fortunate enough to coach," Ivory said in a statement released by the school Tuesday evening. "I will always have fond memories of nearly 20 years in this program and am grateful for the opportunity to lead this program. I've been involved in this wonderful game for more than 30 years, and after a difficult covid-challenging season, I am tired.

"It's best for me to step away now and spend more time with my family."

Ivory, 55, who was the longest tenured coach in the Southwestern Athletic Conference, served as an assistant at four different schools within the league, including UAPB from 2002-06. He was named the head coach of the Golden Lions after Van Holt resigned in March 2008.

Throughout his 13-year stay, UAPB routinely spent the first two months of each season traveling to play bigger schools, many of which were from Power 5 conferences, for large payouts to boost the school's athletic budget. More times than not, that left the Golden Lions saddled well under .500 before they ever played a home game.

Under Ivory, the Golden Lions picked up victories over teams such as SMU, Florida International, Houston, Seattle, UALR and Arkansas State. He also led UAPB to the 2010 SWAC Tournament title and its first NCAA Tournament berth a week later, where the Golden Lions beat Winthrop in a play-in game before losing to eventual national champion Duke.

Ivory, who was a college All-American during a four-year playing career at Mississippi Valley State, was inducted into the SWAC Hall of Fame in 2019.

"The name George Ivory is synonymous with Golden Lion men's basketball," UAPB interim Athletic Director Chris Robinson said in the release. "From four years as an assistant coach to 13 years as a head coach, his program provided many memorable moments and made the H.O. Clemmons Arena one of the toughest venues for opposing teams in the SWAC. We thank him for his tireless commitment and effort poured into the program and look forward to his success in future endeavors."

AS AN ASSISTANT COACH

AS A HEAD COACH AT UAPB