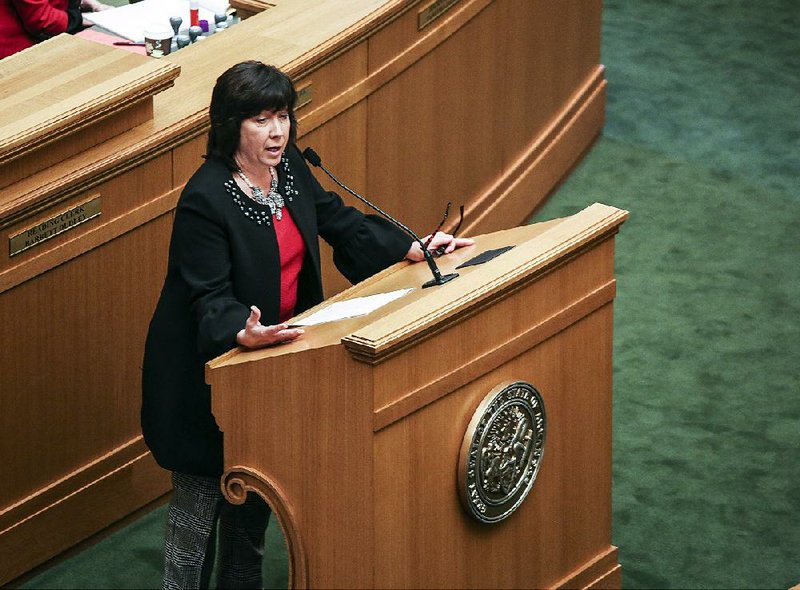 FILE - Rep. Mary Bentley, R-Perryville, speaks on the floor of the House in this file photo.

A House committee on Tuesday advanced a bill that would allow teachers to discuss religious beliefs of creationism along with instruction about scientific theories in public schools in Arkansas, over objectors who said the bill puts matters of faith in schools and doesn't match up with the state's curriculum-forming process.

"Our students are missing out on being able to hear the debate, and it causes them to grow and hear different sides," she said.

She noted support for creationism among the country's founding fathers and said the bill would not cause any type of proselytizing.

A House Education Committee member, Rep. Megan Godfrey, D-Springdale, said the bill doesn't align with how curricula are created in the state, and asked why Bentley introduced a blanket bill rather than going through that process.

"Blanket permission without specifics or contextualization really is unhelpful to teachers. If we see the value of teaching this theory then it needs to be in the academic standards," Godfrey, a former educator, said later in the committee meeting.

Bentley said HB1701 is a response to Act 590 of 1981, which mandated that the state "give balanced treatment to creation science and to evolution-science." Then-U.S. District Court Judge William R. Overton ruled that the law was unconstitutional in 1982.

Another law in the state attempted to ban teaching the theory of evolution, which the U.S. Supreme Court struck down in a 1968 ruling.

The committee heard testimony from Julie McDonald, a self-described "Christian from a small town" who expressed personal opposition to the bill.

"By teaching an element of faith as fact I believe you are muddying the water of religion and faith. Students come to school to learn about factual knowledge to the extent we know it and individuals go to church to learn faith," she said.

McDonald added that parents should "have freedom over what their children are taught regarding religion and the creation of the universe."

"The science and the faith are actually, can be one and the same here," said Meeks, a former college-level astronomy instructor.

Committee member, Rep. Stu Smith, R-Batesville, said when he was a world history teacher he found it valuable to discuss the world's different monotheistic religions and allow students to draw their own conclusions.

That similar laws had been found unconstitutional in the past wasn't brought up during the committee's discussion.