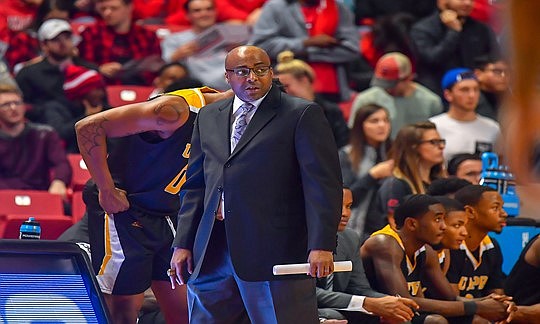 Just a week earlier, George Ivory talked about life going forward without two key players on his University of Arkansas at Pine Bluff men's basketball team and how good Baylor really was when UAPB took on the eventual national champion Bears in December.

By Tuesday, Ivory foresaw life completely away from the court. He announced his resignation as head coach after 13 seasons, leaving as the longest-tenured active head coach in the Southwestern Athletic Conference.

"It has been an honor and privilege to be the head coach at UAPB and to guide the young men who I was fortunate enough to coach," Ivory, 55, said in a news release. "I will always have fond memories of nearly 20 years in this program and am grateful for the opportunity to lead this program. I've been involved in this wonderful game for more than 30 years, and after a difficult covid-challenging season, I am tired. It's best for me to step away now and spend more time with my family."

A native of Jackson, Miss., Ivory first hit the SWAC scene in 1983 as a 6-foot guard at Mississippi Valley State. He was the Delta Devils' leading scorer as a junior in the 1985-86 season, averaging 15.8 points, 2.5 rebounds and 4.9 assists for a team that won the SWAC tournament (after finishing third in the regular season) and gave eventual national runner-up Duke all it could handle in the first round of the NCAA tournament as a 16-seed.

Ivory, who registered 21.8 points per game as a senior, was inducted into the SWAC Hall of Fame in December 2019.

He was an assistant coach with the Jackson State women's and Valley men's teams before joining the UAPB staff in 2002, remaining there four seasons before going to Grambling State and then back to Valley. UAPB hired him as head coach in 2008.

Ivory returned to the NCAA tournament in 2010 after the Golden Lions won the SWAC tournament. The Lions defeated Winthrop in the opening-round game of the NCAA tournament and then lost to eventual champion Duke in the round of 64. (The next year, the NCAA expanded the tournament from 65 to 68 teams and introduced the First Four round.)

UAPB was forced to vacate the win against Winthrop, however. The NCAA ruled in November 2014 that UAPB improperly certified 124 student-athletes from 2007-12 across four sports and stripped the Lions of victories in which those athletes competed.

Ivory posted a 140-268 overall record, including a 116-115 mark in SWAC play. Six times the Lions earned winning records in conference action under his watch, most recently in the 2018-19 season (10-8). The Lions won three conference games in each of the next two seasons.

His teams, like most SWAC programs, relied on playing almost all of their nonconference games at the site of bigger-name programs to see tougher competition before SWAC play and receive five- to six-figure paychecks that help with the program's budget.

The 2020-21 Golden Lions stumbled to a 4-21 record (3-13 in the SWAC) with a transfer-heavy roster that didn't have summer workouts to help them jell before the season. They defeated Arkansas State 75-74 for their only nonconference win of the season on Dec. 9.

This season's Lions started 2-0 in the SWAC but lost their next 12 games. They snapped that streak with a win over Valley to earn the No. 7 seed in the SWAC tournament in Birmingham, Ala., only to end the season with a loss to Jackson State.

Last week, Ivory confirmed leading scorer and rebounder Shaun Doss Jr. and second-leading rebounder Markedric Bell were entering the NCAA transfer portal, adding both would receive their bachelor's degrees in May. Two of Ivory's sons, Khalid Campbell (former player who is now a graduate assistant) and George Ivory III (freshman guard this season) have been involved with the program.

"From four years as an assistant coach to 13 years as a head coach, his program provided many memorable moments and made the H.O. Clemmons Arena one of the toughest venues for opposing teams in the SWAC," Robinson said. "We thank him for his tireless commitment and effort poured into the program, and look forward to his success in future endeavors."

Before the coronavirus pandemic, UAPB consistently ranked at or near the top of the conference in home attendance under Ivory. The Lions posted winning records at home in 10 of Ivory's 13 seasons, and the game atmosphere at Clemmons Arena was once voted the best in the SWAC, according to a news release.

The university said a national search for Ivory's successor will be conducted.