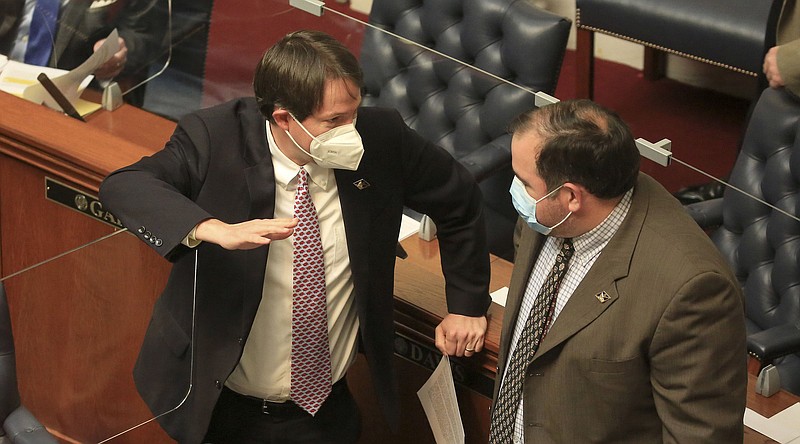 Four bills that would tighten restrictions on absentee ballots and adjust the state law around election violation complaints were endorsed by a Senate committee Thursday.

Senate Bill 644, by Sen. Kim Hammer, R-Benton, would create a process by which the Legislature can review election issues. The bill also would bar a person convicted of a misdemeanor related to violating election law from serving as an election official in future elections.

Hammer said the Legislature already has the authority to review those issues under current state law, but the bill establishes the procedures, and Hammer said he believed the Joint Performance Review Committee needed the opportunity "to be able to look at things that maybe aren't getting looked at by the local prosecutor."

"I feel like the Legislature just has its hands in almost every issue now," Tucker said.

Jim Estes, a Republican election commissioner from Washington County, said he personally objected to the bill's shifting of power from county officials to state officials. He added that local officials might be fearful that they could lose their job because they made an error, based on the language of the bill.

"I think it is specifically a shift of power by the state level from the county, and I think it specifically puts county officials in some fear and trepidation of what might happen to them and their job," Estes told the committee. "With all the code that we have, surely there are existing rules and laws that you can deal with the kinds of problems that we're talking about without having to do this. ... I don't see what the reason for it is."

Sen. Bob Ballinger, R-Ozark, said there's not a way to hold someone accountable for election law violations if the county isn't willing to do it.

Senate Bill 643, also by Hammer, would require that applications for absentee ballots that are submitted in person be turned in to the county clerk's office no later than the Friday before the day of the election.

Under current law, the ballots have to be turned in the day before election day.

Lindsey French with the Association of Arkansas Counties said the Arkansas Association of County Clerks did not have an official position on SB643, but said the majority of members didn't have a problem with it.

French noted that absentee voters could still return their ballot by mail through the end of election day if they received their ballot late due to a delay in the mail.

House Bill 1803, by Rep. Mark Lowery, R-Maumelle, would give the state Board of Election Commissioners the authority to institute corrective actions in response to complaints and would expand the types of violations about which county election boards can make complaints.

House Bill 1715, also by Lowery, would ban the distribution of unsolicited absentee ballot applications to voters by designated election officials and makes the possession of more than four absentee ballots by one person a rebuttable presumption of intent to defraud.

The legislation would also require that signatures on absentee ballots be compared with signatures on voters' original registration certificates.