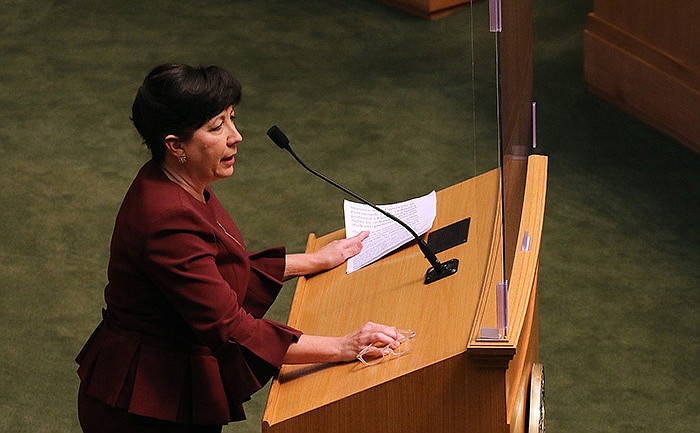 “This bill is just a first step to help protect our teachers but when we have students in school now that don’t identify as a boy or a girl but as a cat, as a furry, we have issues,” Rep. Mary Bentley (shown) said Thursday in presenting her bill that would require public school employees to address students only by the name and sex designated on the student’s birth certificate. (Arkansas Democrat-Gazette/Thomas Metthe)

Arkansas teachers wouldn't be required to address students by a name or pronoun inconsistent with the student's biological sex under proposed legislation that passed Thursday in the House, one of the latest of several measures in the state Legislature that human-rights advocates say targets transgender people.

In a written statement, the one-term president accused the two-term governor of being a "RINO" -- a Republican in Name Only. A spokesman for the state Republican Party rejected the assertion.

Lawmakers who opposed HB1749, as well as LGBT-rights advocates, say it protects teachers who intentionally misgender students who are transgender, which sponsor Rep. Mary Bentley, R-Perryville, has acknowledged would be the case.

The House's 62-21 vote, which was mostly along party lines, sends the measure to the Senate. Two lawmakers voted present, and 14 didn't vote. Two Republicans, Rep. Frances Cavenaugh of Walnut Ridge and Rep. Jeff Wardlaw of Hermitage, voted no, and Rep. Spencer Hawks, R-Conway, was excused.

Hutchinson has expressed concerns about the latest proposal.

"This bill is unnecessary," he said in a written statement Thursday. "I am requesting my Department of Education to further evaluate."

Bentley said some teachers had raised concerns to her about students who have changed their name or pronoun several times in a year, or use three different names in as many classrooms, and fear that they'll be sued for not addressing the child by their preferred name or pronoun.

Love said intentionally not referring to someone by what they want to be called is "one of the most disrespectful things that you can do.

"That's one of the simplest decencies that we can give someone. ... That's not hard. That's not difficult. That's just a bit of decency and a bit of respect and I think that's what we need to do," Love said.

Rep. Mark Lowery, R-Maumelle, spoke for the bill and mentioned a situation at the residential Arkansas School for Mathematics, Sciences and the Arts, where a "male student who wanted to be called by a female name" was voluntarily referred to that way by teachers, but administrators were instructed to refer to the student by the student's given name when talking to the child's parents.

Lowery said "not letting a parent know what their own child is going through shows that we have a problem."

"This bill does not specifically address the example I'm giving you but it does put a spotlight on the fact that it is something that needs to be addressed, and so I think that a good starting point would be to vote for this bill," Lowery said.

Godfrey said, "There's nothing more critical than a positive relationship between a student and a teacher, especially kind of at those adolescent grades" with regard to student achievement.

She said teachers who intentionally misgender students are severing that vital relationship.

Bentley said schools should do more to address things like students changing their name between classes or identifying as an animal.

"We have a real issue in our state, and I need our districts to take a look at this and do more than this bill does," Bentley said. "This bill is just a first step to help protect our teachers but when we have students in school now that don't identify as a boy or a girl but as a cat, as a furry, we have issues."

Some members of the House Education Committee said Tuesday that those concerns weren't something they'd heard from teachers.

In response to a question from committee member Rep. Charlene Fite, R-Van Buren, Bentley said no teacher had been sued for not using a student's preferred name or pronoun in Arkansas as of Tuesday.

Richelle Brittain, a recent graduate of the University of Arkansas at Little Rock's William H. Bowen School of Law who is transgender, said at Tuesday's committee meeting that the bill violates Title IX as interpreted by President Joe Biden's administration. An executive order that Biden signed last month states that discrimination on the basis of sex includes discrimination based on gender identity.

"This bill targets trans kids. It is aimed at protecting intentional misgendering of our kids," Brittain said.

Bentley said in committee that a student's biological sex would be determined by the registration forms submitted at the beginning of the school year, which don't include a space for preferred pronouns.

The bill doesn't specify that schools would determine a student's biological sex based on the form, but Bentley said she would be happy to amend the legislation to do so on the Senate side.

HB1749 is one of several measures passed by or advancing in the Arkansas Legislature that are seen as targeting transgender individuals.

Act 461, which the governor signed into law in March, would ban schools from allowing transgender girls and women from participating on the sports teams aligning with their gender identity.

House Bill 1882, which was filed this week, would allow government entities to be sued for permitting a person to use a restroom designated for a sex different from the sex a person was assigned at birth.

House Bill 1570, the ban on gender-affirming treatment for transgender minors, was enacted Tuesday when the Legislature voted to override Hutchinson's veto.

Fox News host Tucker Carlson subsequently criticized Hutchinson for opposing the bill, suggesting -- without offering any evidence -- that the governor was acting at the behest of Walmart or the Walton family.

The Walton Family Foundation, he noted, had backed Hutchinson's decision.

In a written statement posted Tuesday on its website, Tom Walton, the foundation's home region program committee chairman, had voiced alarm about "the string of policy targeting LGBTQ people in Arkansas."

"This trend is harmful and sends the wrong message to those willing to invest in or visit our state," the grandson of Walmart founder Sam Walton had written.

"We support Gov. Asa Hutchinson's recent veto of discriminatory policy and implore government, business and community leaders to consider the impact of existing and future policy that limits basic freedoms and does not promote inclusiveness in our communities and economy," he wrote.

On his program Wednesday, Carlson suggested Hutchinson hopes to one day serve on the Bentonville-based retailer's board.

"It is irresponsible for Tucker Carlson to make baseless claims without any evidence or truth to back them up," Hutchinson said.

"If I have been offered any corporate board seats then please let me know because that is news to me. Let me be clear, I have almost two years left as Governor of this great state and that is my focus," he said.

"In terms of my decision making as Governor, I am not influenced by any pressure other than the weight of my convictions and the concern I have for the people of Arkansas," he said.

"'Bye-bye Asa,'" that's the end of him!," the former president wrote. "Fortunately for the Great State of Arkansas, Sarah Huckabee Sanders will do a fantastic job as your next Governor!"

In a written statement, Hutchinson shrugged off Trump's criticism.

"Forty years ago when I started my fight to build the Republican Party of Arkansas I was called 'a right wing extremist.' I was simply a conservative then and remain a conservative now," he said. "Today, as then, I am less concerned about monikers and more concerned about principle and the direction of our nation. Our party was built upon ideas, civil rights, individual liberty and restraints on government. Hopefully, we can debate our ideas with respect and through civil discourse."

In a text message, Sanders would not say whether she shared Trump's view of Hutchinson, but voiced support for the bill he vetoed.

"I believe in limited government, but there is a role for us to protect those who can't protect themselves, especially children, which is why this law is important and I support it," she wrote.

Hutchinson, while supporting Trump's reelection bid, broke with the president after it became clear that Democrat Joe Biden had won.

He opposed efforts to overturn the decision of the Electoral College, and said Trump bears "a great deal of responsibility, key responsibility, for what happened at our nation's Capitol on January 6."

Hutchinson has also said he would not support a Trump presidential bid in 2024.

"That seems like a pretty hard claim to make," he said, recalling Hutchinson's service as an impeachment manager during the Senate trial of President Bill Clinton and his efforts, as state party chairman, to ensure that the state would pay for Republican primary elections. 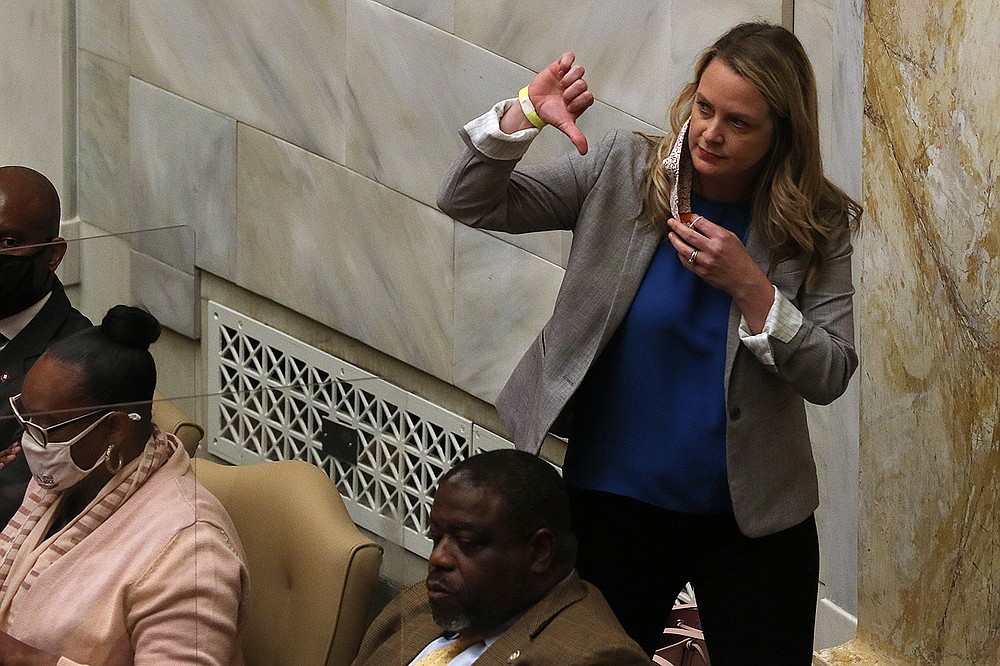 Rep. Megan Godfrey (shown) said the bill would sever the vital positive relationship between a student and a teacher. (Arkansas Democrat-Gazette/Thomas Metthe)

CORRECTION: An earlier version of this story listed an incorrect bill number. House Bill 1570 is the ban on gender-affirming treatment for transgender minors.