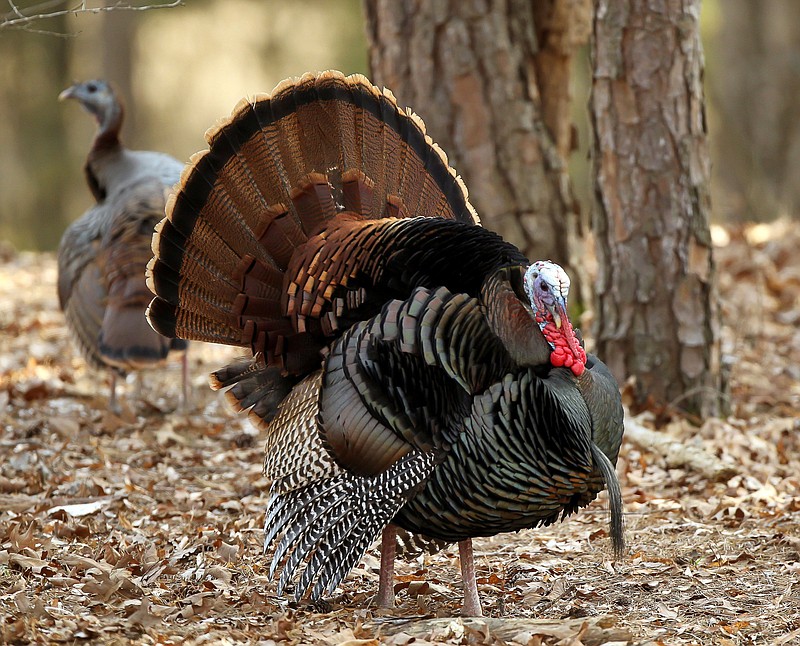 Spring turkey season in Arkansas starts April 19, and hunters should be aware of changes because there are many.

Among other items, it reads, "Only one turkey may be checked per hunter during the first seven days of the season, regardless of zone." That's a big change from previous years where the two main restrictions previously were "no more than one legal turkey may be taken per day" and "the statewide bag limit (for the entire season) is two bearded turkeys, no jakes."

An additional significant change in Game and Fish Commission rules includes reducing the number of turkey-hunting zones, with their various restrictions, from 17 to only two.

The commission's Turkey Program Coordinator Jeremy Wood said in a recent email that "restricting the take of turkeys to one legal bird during the first 7 days of the season is an effort to help spread out hunting pressure and harvest of adult gobblers during the early parts of the season to give turkeys as much opportunity to breed as possible prior to harvest. This conservative effort will attempt to balance hunter opportunity while allowing turkey populations a chance to rebound based on the most recent science available. Currently about 70% of the annual harvest on average occurs during the first 9 days of the season (including the 2 day special youth hunt weekend)."

With the season pushed back, this should allow more breeding to occur before the regular season opens, Wood said.

Wood said hunters should keep in mind that not every hunter is capable of harvesting two legal turkeys nor is that the reason a two-bird bag limit is in place.

"The bag limit is set at a certain level that we anticipate the population can withstand based on hunter harvest rates," Wood said, "not a level that indicates the number of turkeys every turkey hunter is able to take." Based on hunter surveys, of the 10%-12% of hunters who harvest a bird, approximately 10% successfully harvest a second bird.

Jim Harris, managing editor of the Game and Fish Commission's Arkansas Wildlife magazine, said the reasoning behind the changes is sound.

"Everything we do is biologically driven," Harris said. "The decision to revamp turkey regulations came at the recommendation of our research findings. Those were forwarded to the commissioners. They open recommendations to a public comment period before voting whether or not to implement changes. The commission made their final decision and voted in August of 2020 to put these new rules in place."

Game and Fish Commission Assistant Chief of Wildlife Luke Lewis said he worked for the National Wild Turkey Federation for 15 years before moving to Arkansas Game and Fish, so he has a lot of experience hunting and working with turkeys across the country.

"Harvest numbers in Arkansas are down to only 8,000 average now from the high numbers of birds we saw being taken in the 1990s," Lewis said. "There's a disturbing trend not just in Arkansas but across the entire Southeastern United States of turkey population decline. That's why we chose to reset the regulations based on recent research findings. We understand there are God-given circumstances beyond our control, but there are actions we can take to put more polts on the ground and keep them alive until fall. Habitat and predation have a lot to do with this decline, but we find through telemetry studies that when baby birds can survive the three or four months of summer, mortality rates drop dramatically. We're hoping for good weather when polts hatch to help promote their survival rate."

Mike Chamberlin with the University of Georgia is in charge of a 14-state alliance called the Southeast Wildlife Association promoting wildlife preservation, Lewis said.

"He came to AGFC and spoke to our whole staff last year," Lewis said. "He pointed out how there is a narrow window when gobbling toms couple with mature hens. Killing dominant gobblers before hens have a chance to breed seriously affects the success of nesting. Jakes may make a lot of noise and strut around, but they don't typically breed. We feel we need to stack the odds in favor of the turkey to protect our resource for the long term. Biologically, we're trying to give the gobbler a chance to do his thing."

Lewis said political pressures have often caused the Game and Fish Commission to have earlier seasons than are preferred, but Lewis said that was before he arrived in Arkansas.

"We're not trying to handcuff the hunter," he said. "We've added an additional week on the back end of the season from recent years." This year's hunt will run 21 days rather than just 15, plus the two day youth hunt.

"We began restricting jake harvest a few years ago with the exception of hunters under age 16," Lewis said. Hunters under 16 are still allowed to take one jake. "That leaves those birds as 2-year-old gobblers for the following season. The elimination of jake hunting is also a factor impacting the lower harvest counts of past few years."

There is an upside, Lewis said.

"We don't feel like the severe cold weather this winter greatly hurt the birds," he said. "Trapping studies we are doing had difficulty getting birds on bait so that indicates there was still plenty of natural food sources through the winter. Surveys also indicate a 4% increase in reproduction last spring. I recommend hunters do their homework and get as much preseason scouting in as possible so you know where to find birds and have multiple options. We are going to continue to listen to people. They should know they can always call and ask us what is on their minds. Let us know rather than let stuff fester."

Wood's email in regard to the change in turkey hunting regulations further stated, "this regulation should not inhibit individuals from having a turkey camp and enjoying the outdoors during the first week. If a hunter is lucky enough to harvest a bird during the first 7 days of the season, that is a great accomplishment, 85+% of turkey hunters this spring won't get the opportunity to pull the trigger.

"If a hunter is successful, they do have the option to take someone else hunting, call for a friend, or simply scout to find other birds the remainder of that week before attempting to harvest a second bird starting the second Monday of the season," Wood said.