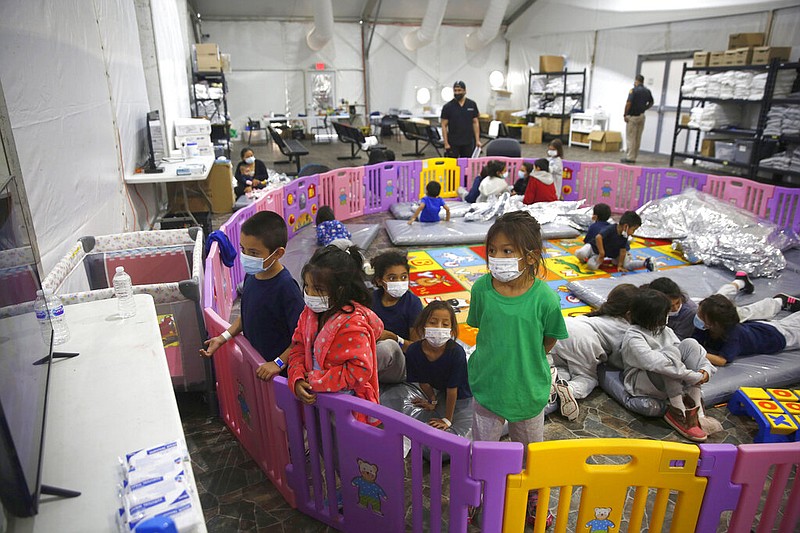 Young unaccompanied migrants, from ages 3 to 9, watch television inside a playpen at the U.S. Customs and Border Protection facility, the main detention center for unaccompanied children in the Rio Grande Valley, in Donna, Texas, in this March 30, 2021, file photo. (AP/Dario Lopez-Mills, Pool, File)

WASHINGTON -- A desperate plea landed last week in the email in-boxes of employees in government agencies like the Department of Homeland Security and NASA: Will you consider taking a four-month paid leave from your job to help care for migrant children in government-run shelters packed with new arrivals at the border?

The request to much of the federal workforce came from the Department of Health and Human Services, which is at the heart of an effort by the Biden administration to keep up with a surge in young people crossing the southwestern border hoping to reunite with relatives already in the United States.

The numbers are daunting. In March, Border Patrol agents encountered nearly 19,000 children at the border -- the largest number recorded in a single month -- most of them fleeing poverty and violence in Central America. And the flow of migrant children is expected to increase in coming weeks.

More than 20,000 children and teenagers are in the custody of a government system that is already at "103% of capacity," including nearly 17,000 in shelters run by the health department, according to briefing materials from Operation Artemis, a response to the border crisis led by the Federal Emergency Management Agency.

Government projections obtained by The New York Times show there could be more than 35,000 migrant children to be cared for by June -- a prospect that one former senior Health and Human Service Department official called "terrifying."

Lawyers representing immigrant children in long-standing federal litigation over custody conditions raised concerns Friday that the Health and Human Services Department isn't moving quickly enough to release the minors to sponsors. Without doing that, so long as border authorities continue detaining children at this pace, "it is difficult to see how a proliferation of overcrowded, irregular facilities can possibly be avoided," the attorneys wrote in a court filing.

Government lawyers wrote in court papers that the Health and Human Services Department's office of refugee resettlement is ramping up efforts at recently opened sites to quickly reunite these children with their families.

The ability of the department to build shelters, quickly move children into them and then unite them with relatives and other sponsors in the United States is the first major test of whether the Biden administration can respond swiftly and effectively to a growing immigration crisis that has far-reaching political and human ramifications.

The pressure is producing tension inside the White House. President Joe Biden expressed frustration with Xavier Becerra, his new secretary of Health and Human Services, in a White House meeting March 30, for what the president views as bureaucratic holdups in increasing capacity, according to two administration officials familiar with the exchange.

Susan Rice, director of the Domestic Policy Council, and Amy Pope, the president's senior adviser for migration issues, have been aggressively pressing officials from the health department and other immigration agencies for explanations about the failure to quickly move more than 4,000 migrant children out of jail-like detention facilities run by the Border Patrol, according to several people familiar with the meetings.

When they first cross the border, unaccompanied children and teenagers are taken to border jails. By law, they are supposed to be held there for no more than three days before being moved to about 150 shelters and other facilities and group homes overseen by the Health and Human Services Department.

But because of a lack of available space in the shelters, the young people are frequently held far longer in the often-harsh conditions of the border facilities. When they eventually are shipped to the health department's shelters around the country -- where they are required to receive schooling, medical care, psychological services and recreation while officials vet family members, friends or foster parents who can take them in -- they typically face further long waits.

The latest surge, on pace to be larger than those that prompted crises for President Barack Obama in 2014 and 2016 and for President Donald Trump in 2019, has administration officials racing to erect facilities and recruit workers for them.

Officials have opened a dozen emergency shelters in vacant spaces like convention centers in Dallas and San Diego, an expo center in San Antonio, and a military site and a former camp for oil workers elsewhere in Texas.

They also have moved to cut the time it takes to conduct background checks for parents in an effort to release the young migrants from the shelters more quickly and open up spots for those being held in border jails. But even with the early signs of progress, more than 4,100 minors were stuck in border facilities last week, far more than the 2,600 detained in border jails at the peak of the surge in 2019.

Republicans have seized on the issue to claim that Biden did not act swiftly enough to expand the shelter system even as he focused on unwinding his predecessor's restrictive border policies.

A flurry of executive orders issued weeks after Biden took office targeted other parts of his immigration agenda, including reviewing the Trump administration's policies that limited asylum and halting border wall construction. And the president waited until March to call on FEMA to assist in the effort to find shelter space for the children, after the number of minors stuck in border jails surpassed 3,000.

Aides to Trump said career officials warned the incoming Biden team of the likely surge of arrivals in the spring but said the new administration did not move quickly to begin reactivating emergency facilities for added space.

Biden administration officials reject that criticism, saying they were not given enough information during the transition and they notified Congress of the need to begin adding emergency capacity in early February.

They said they also were hampered by a decision by Trump administration officials during the pandemic to freeze hiring at the health department's Office of Refugee Resettlement, which oversees the shelters. And they accused their predecessors of merely relying on the existence of Trump's harsh policies that blocked migrants from entering the country.

"They were turning away unaccompanied migrant kids so they were not taking efforts to expand the shelter system," said Cecilia Munoz, one of Biden's top immigration officials during the transition.

With the permanent shelters out of space, the administration is increasingly turning to temporary spaces that are more like hurricane shelters, with cots rather than beds and few of the more school-like services that the health department offers at its licensed facilities.

Texas Gov. Greg Abbott, a Republican and frequent Biden critic, asked the administration to close a holding facility for unaccompanied children at the Freeman Coliseum in San Antonio, citing allegations that they aren't getting enough to eat and boys are unsupervised in showers.

White House press secretary Jen Psaki said Friday that the administration takes the "safety and the well-being of children in our care very seriously" and that authorities would investigate Abbott's claims, but that, at this point, "we have no basis for his call" to shut down the facility.

Biden's aides are scouting additional sites, including a convention center in Long Beach, Calif., and a Navy boot camp in Illinois. Officials also are planning to expand the number of tent camps attached to the border jails. Government documents show the administration still needs to ramp up hiring of medical officials and case managers.

A briefing memo sent to administration officials last week directed the health department to "identify and deploy all available federal volunteers to support" the effort to address the increase of minors, a drive reflected by the email seeking government workers to help. As of Friday, 2,722 employees across the government have volunteered, in most cases with their salaries being picked up by the health department. Some are caring for children at shelters. Others are helping with case management, technology services, food delivery, transportation and other logistics.

The United States has long struggled to quickly move children out of the government's care to make room for new arrivals.

Most are eventually matched with a parent who is already in the country. But others are handed over to more distant relatives, friends or foster parents. The more distant the connection, the longer the children are typically held in the shelters while health officials do background checks to ensure their safety.

Of the roughly 2,000 minors released to sponsors last week, about half were reunited with parents or legal guardians after an average of 23 days. Those with more distant relatives had to wait on average nearly two months.

The Biden administration has made progress in recent days, bringing the number of minors in border detention facilities down by more than 1,000 from the height of 5,000 last month. But the internal documents show that to handle a surge that the administration has said will continue to grow into the summer, the health department will need to release more than 800 minors a day by June, compared with the roughly 300 children being released daily.

Officials are also looking to reduce the flow of migrants from Central America, including children, with diplomatic outreach, new immigration programs and financial investment in the region.

As startling as child migration may be to some, its roots go back decades.

Pivotal litigation to protect unaccompanied minors began in the mid-1980s and was forged into a consent decree now known as the Flores agreement of 1997. The litigation established basic rules for how migrant children were treated after arriving in the U.S. It takes its name on behalf of the first plaintiff, a teenager from El Salvador who arrived in the Los Angeles area.

Today, migrant minors from northern Central America continue to make up the bulk of unaccompanied children crossing the border.

Last week, a small 7-year-old boy from Honduras was believed to be among them.

At the dreary Reynosa plaza off the international bridge, his mother Heidi Rodriguez was frantic. She was searching for the boy, her son Omar Antonio, who had been sent north alone.

The 39-year-old Honduran mother arrived in Reynosa a month ago with plans to rebuild her life in the U.S. In Honduras, she owned a tortilla shop, but she was worn down by the constant payment of a "war tax," as extortion by gangs is known.

"I just couldn't pay anymore," the woman said, as she braced herself from the wind in her parrot-green hoodie and jeans.

She was staying in Reynosa when she got a call from the boy's grandparents that they had sent little Omar north to be with his father. But the mother had long ago separated from the father. The grandparents didn't tell the mother until the boy had reached Reynosa.

Rodriguez pleaded with Mexican authorities to help her at the bridge, showing them a photo of her son, she said.

Suddenly, Mexican government officials called her into their bridge offices. The mother rushed in. Officials blocked others from entry.

Whether she would learn the fate of her child is unknown.

Information for this article was contributed by Michael D. Shear, Zolan Kanno-Youngs and Eileen Sullivan of The New York Times; by Elliot Spagat, Alexandra Jaffe, Jude Joffe-Block and Amy Taxin of The Associated Press; and by Dianne Solis of The Dallas Morning News (TNS).