Deal in works to buy wildlands near Pinnacle Mountain 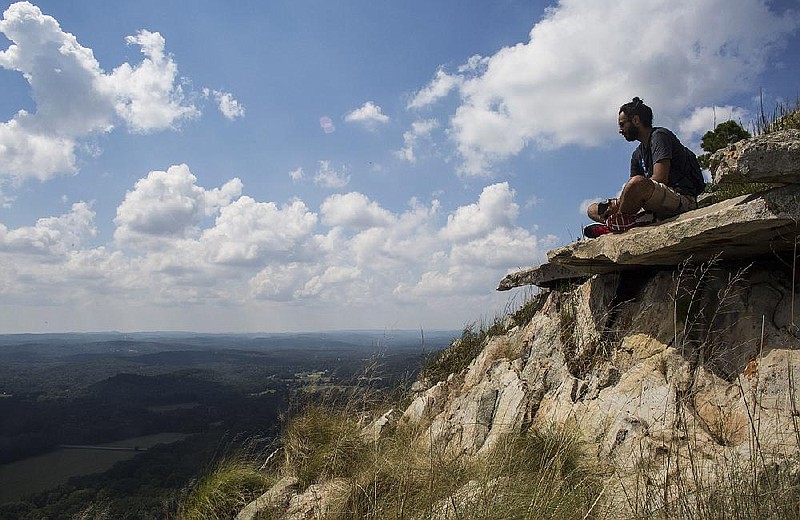 Sunny Harshdeep eats lunch from a spot atop Pinnacle Mountain as he looks into the surrounding valley from the summit in this Sept. 5, 2016, file photo. Hundreds of visitors hiked the trails that Monday during the Labor Day holiday. (Arkansas Democrat-Gazette file photo)

The Nature Conservancy and the Arkansas Natural Heritage Commission hope to raise enough money to add additional 458 acres in the west Little Rock-Maumelle area for conservation and outdoor recreation.

The deal is not yet finalized with PotlatchDeltic, a timberland real estate investment trust that owns the land where Blue Mountain sits. The commission has submitted grant proposals to the Division of Arkansas Heritage's Natural and Cultural Resources Council and the federal Land and Water Conservation Fund for a significant portion of its $4 million project share, according to a news release.

The Nature Conservancy pledged to raise $1 million to help buy the property and at least another $1 million for long-term management of the property and the development of trails and other amenities. It has raised more than 75% of these funds already, said Jen Barnhouse, director of philanthropy.

"We want to keep it out of development and add it to the broader conservation and recreation landscape that's taking place out there," she said. "There's been a lot more demand and desire for outdoor spaces to enjoy. This is kind of a once-in-a-lifetime opportunity to do that with this last pinnacle."

For recreation, the current plan is to design 6-7 miles of low-impact trails that hikers and mountain bikers can enjoy, Barnhouse said. It would be similar to those in the Rattlesnake Ridge Natural Area, and there could be a possibility of connecting some of the trails.

"It's a real nice mix of rocky outcroppings and tall rugged pinnacle, but it also has some low, easy slopes at the bottom that could be more friendly for beginner mountain bikers and kids. So, it offers a little bit of a different terrain," she said, in comparison with Rattlesnake Ridge.

One of the hopes is that this new natural area can help alleviate some of the crowds at nearby popular spots.

Pinnacle Mountain is Arkansas' most visited state park with an estimated 5,000-7,000 people per day on Fridays, Saturdays and Sundays, according to the Heritage Division. Rattlesnake Ridge has had 42,000–44,000 visitors annually since it was acquired by the commission and conservancy in 2018.

The lands' dessert desertlike and rocky-grassland habitats resemble those more often found in southwest Colorado or Utah than Arkansas, and they are home to unique plants and animals, said Theo Witsell, chief of research and inventory for the commission.

"It's really got this western feel. It's actually a relict natural community, left from a hotter, drying climatic period of the past," he said.

"There's a really nice population of a globally rare wildflower, called an Arkansas twistflower. It's a real showy, hot pink and purple mustard. It's found in a few counties in the eastern Ouachita Mountains and nowhere else in the world."

The Maumelle Pinnacles are home to several other species of state conservation concern: the Diana fritillary butterfly, Southeastern bat, Western diamondback rattlesnake and Wright's cliffbrake fern – known from just three sites in Arkansas. The rare Eastern collared lizard also has been spotted in the rock outcrops on the pinnacles by residents, according to a commission report on the area.

Blue Mountain also is an important area for protecting drinking water and the water that flows into the Little Maumelle River, Barnhouse said.

If all goes through Blue Mountain will be the state's 77th natural area for a total of about 71,000 acres.

CORRECTION: Grant proposals have been submitted to the Arkansas Natural and Cultural Resources Council, which is housed in the Division of Arkansas Heritage, to help purchase a section of land containing Blue Mountain near Pinnacle Mountain State Park and Rattlesnake Ridge. An article in Sunday’s editions provided an incorrect name for the state agency.