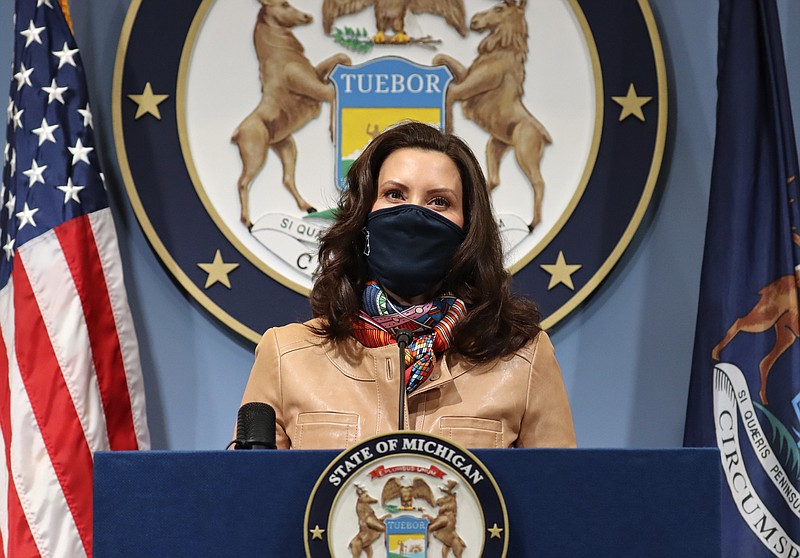 In this photo provided by the Michigan Office of the Governor, Gov. Gretchen Whitmer addresses the state during a speech in Lansing, Mich. Friday, April 9, 2021. Faced with the country's highest rate of new coronavirus infections, Whitmer on Friday urged a two-week suspension of in-person high school classes, all youth sports and indoor restaurant dining. (Michigan Office of the Governor via AP)

DETROIT -- Michigan Gov. Gretchen Whitmer said Sunday that she's going to continue to fight to get more vaccine doses for Michigan despite the Biden administration's resistance to her efforts.

On CBS' "Face The Nation," Whitmer said that while she plans on working with the White House, she's also going to do everything she can to get the people of Michigan more doses as the state deals with a sharp rise of covid-19 cases.

"We are seeing a surge because of these variants, and that's precisely why we're really encouraging them to think about surging vaccines into the state of Michigan. And I'm going to continue to fight for the people of Michigan," Whitmer said.

[Video not showing up above? Click here to watch » https://www.youtube.com/watch?v=df2_MAVJGJY]

In a call with Whitmer late Thursday, Biden said the administration is providing Michigan with more federal resources to support vaccinations, testing and therapeutics -- but is not allocating more vaccine doses -- in an effort to control the state's worst-in-the-nation covid-19 transmission rate.

Whitmer said she understands that the White House is committed to its plan but that she's going to keep pushing for more vaccine doses in the state.

"We're going to continue to work well with this White House ... but I am going to also continue fighting for my state, and anyone who's watched what's going on in Michigan over the last year knows that's how I am," she said. "I'm going to fight to get everything I can for the help of the people in Michigan."

Earlier Sunday on CNN, Michigan Lt. Gov. Garlin Gilchrist told host Abby Phillip that the state can "vaccinate our way out of the pandemic" with bigger vaccine allotments from the federal government.

Gilchrist defended the governor's Friday request -- instead of an order -- that Michigan schools suspend in-person learning, that youth sports suspend activities and that people avoid indoor dining for two weeks.

"April 2021 is different from where [the state was] a year ago in April 2020," Gilchrist said. "We had a lot of different tools at our disposal to be able to implement those policies to the best extent of our ability to be able to keep the spread down. Those were fought politically tooth and nail here by the Republican Party in the state of Michigan."

"Nevertheless, we still have smart policies in place," he added, noting the state's remaining mask mandate and capacity limits in restaurants.

As Michigan's leaders work to obtain more vaccine doses, some states have begun dropping one of the last barriers to vaccine access: residency rules.

New Hampshire and Oklahoma are the latest states to announce they will open up vaccine eligibility to nonresidents. Experts hope that more will soon follow suit as the production and distribution of vaccines ramps up.

The United States is giving out about 3 million shots a day, an increase from roughly 2 million in early March. The push remains urgent as variants of the coronavirus circulate and the country reports a sharp rise in new cases, with an average of almost 68,000 a day over the past week, according to a New York Times database.

In New Hampshire, Gov. Chris Sununu, a Republican, said Wednesday that officials were confident that there would be enough shots to vaccinate out-of-state residents by April 19. That's the deadline Biden set for universal adult eligibility, which all 50 states along with Washington, D.C., and Puerto Rico have said they will meet. Sununu said New Hampshire was "well ahead" of that deadline after making all state residents 16 or older eligible for vaccination April 2.

Sununu faced criticism from students and Democratic lawmakers for not allowing out-of-state college students to get vaccinated in New Hampshire. He said this month that residents had to "come first" and that college students were at lower risk compared with older people.

Moves like the one in New Hampshire make it easier to vaccinate other people with floating residency statuses, such as those who commute to work across state lines, said Dr. Peter Hotez, a vaccine scientist at the National School of Tropical Medicine at Baylor College of Medicine.

This is especially relevant for places like Kansas City, Mo. -- which sits on the edge of Missouri and borders Kansas -- or metropolitan areas like New York, Philadelphia or Chicago whose suburbs stretch well into neighboring states. Hotez said he expected and hoped that more states would lift these restrictions soon.

"As we have more vaccine supply, I think we need to liberalize restrictions as much as possible," he said, adding: "Remember how this works. The virus does not recognize state boundaries."

About 49% of New Hampshire's population of about 1.4 million has received at least one shot, the highest portion out of any state, according to a New York Times vaccination tracker.

Oklahoma began allowing nonresidents to get vaccinated in the state Thursday, nearly two weeks after it expanded eligibility to all in-state residents 16 or older.

About 35% of Oklahoma's population has received at least one shot,.

More than half the states and the District of Columbia still have residency requirements for vaccination, though most allow exceptions for workers employed in that state who live in another, according to a vaccination tracker from the Kaiser Family Foundation, a nonprofit organization focused on national health issues.

Jennifer Kates, a senior vice president of the Kaiser Family Foundation, said more states were likely to open vaccines to all.

Larry Brilliant, a public health researcher, said he was worried that lifting restrictions could open states up to "vaccine tourism" and encourage people to cross state lines to get doses.

It would be more efficient to instead redistribute extra doses to states that need them the most, like Michigan does now, he said.

"It's very hard to rationalize excess vaccine in places that neither want it nor will use it and not sending it to places that desperately need it," said Brilliant, who was part of the effort to eradicate smallpox in the 1970s.

Meanwhile, in California the covid-19 death toll has exceeded 60,000, according to a Los Angeles Times tally of fatalities reported by county.

The toll represents roughly 10.7% of covid-19 deaths nationwide. California is home to about 12% of Americans.

The milestone, recorded Saturday night, comes as California has the 30th-worst covid-19 death rate on a per capita basis of the 50 states, the District of Columbia and Puerto Rico.

With a covid-19 death rate per 100,000 residents of 153, California has the lowest rate of the eight most populous states in the nation, according to a Times analysis of Johns Hopkins University data. Besides California, the other most populous states are Texas, Florida, New York, Illinois, Pennsylvania, Ohio and Georgia.

New Jersey and New York have the highest in the nation, with death rates per 100,000 residents of 280 and 260, respectively. If California had New York's covid-19 death rate, then its death toll from the disease would exceed 101,000.

California has recently observed a dramatic slowing of the average number of deaths being reported daily. In recent days, the state has reported an average of 105 to 120 covid-19 deaths a day -- the lowest such number reported since the autumn-and-winter wave began. At its worst, in late January, California was recording as many as 562 deaths a day, on average, over a seven-day period.

The San Francisco Bay Area has fared far better; for every 100,000 residents, the Bay Area has recorded 79 deaths. If the nine-county Bay Area were a state, then it would have the 45th-highest covid-19 death rate when ranked with the 50 states, the District of Columbia and Puerto Rico.

A big contributing factor to the death rates in Southern California was the large proportion of residents who must leave home to work and who also live in crowded homes, which makes it easier for the coronavirus to spread once a member of a household is infected.

Also, Southern California and the San Joaquin Valley generally have a higher social vulnerability than the Bay Area, meaning that factors such as poverty and crowded housing cause many of these communities to be more vulnerable in a disaster like a pandemic.

Gov. Gavin Newsom faces a potential recall vote over his handling of the pandemic. Critics oppose restrictions he ordered that closed a number of businesses to slow the spread of disease, calling them economically devastating. Newsom has defended the measures as important to save lives, and supporters credit those steps with preventing hospital systems from becoming as overwhelmed as they were in places such as New York at the start of the pandemic.

In general, of California's regions, the Bay Area has been the most supportive of the state's stay-at-home orders.

Information for this article was contributed by Madeleine Ngo and Christina Morales of The New York Times; by Ariana Taylor and Beth LeBlanc of The Detroit News (TNS); and by Rong-Gong Lin II of the Los Angeles Times (TNS).