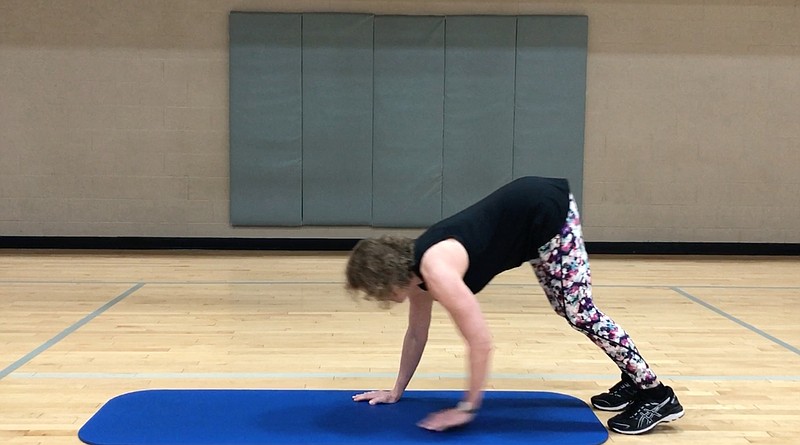 Beverly Lindberg demonstrates the Modified Burpee at Little Rock Athletic Club, where she is a personal trainer. (Arkansas Democrat-Gazette/Celia Storey)

Exercise intensity is one of the most important variables within a workout plan, as it directly correlates with total caloric expenditure, average heart rate and many other critical outcomes. This week, I will shed some light on the mysterious variable that is "intensity."

I will also introduce an exercise modification that demonstrates how intensity can be tweaked ever so slightly so the move suits your fitness level.

Cardiovascular exercise is perhaps the best example of real-time intensity adjustment, because anyone who has trampled through a simple treadmill workout can relate. Increasing the belt speed is one way to increase the intensity of the workout. As the miles per hour escalate, the exerciser must walk or run faster, which results in a higher work output and an elevation in heart rate.

Adjusting speed on a machine like this allows intensity to be increased in a linear fashion, so you can push heart rate to a desired level. It's a very clean way to observe the relationship between heart rate response, respiration rate and workout intensity.

But strength training intensity is less obvious. There are a few ways to adjust intensity within a strength workout, and each of them produces a slightly different physiological response.

The most common method for increasing strength training intensity is to use more resistance — a heavier weight or a stiffer band. Using more resistance requires the exerciser to produce more force to make the target muscles move through their range of motion. As the muscles produce more force, a higher percentage of muscle fibers is recruited, which requires more oxygen and therefore a higher heart rate.

But strength training intensity can also be increased in less obvious ways. Adding repetitions to a set is my favorite option for beginners, because exercisers get immediate positive feedback regardless of their absolute muscular strength. I think increasing repetitions is the fastest way to measure strength improvements from workout to workout.

It usually takes several weeks to increase muscular strength to the point that higher resistance can be moved, so the amount of positive feedback is pretty scarce. Beginners really need that immediate "success" feedback, and increasing the number of repetitions they do as they advance is a guaranteed way to achieve that.

Slowing down repetition speed is another method of increasing intensity during a strength workout, but it is less intuitive and a little awkward for most exercisers. People usually learn to perform strength-training repetitions at a certain cadence, and slowing that down doesn't feel natural.

With that said, I like to incorporate slower repetition speeds for specific types of exercises that may have a "jarring" effect when performed at regular speed. This week's exercise happens to be one of those.

The Modified Burpee is performed at a slower speed than a traditional burpee to allow the exerciser to feel more muscular fatigue in the upper body and core. It's an intentionally slower movement that requires more control and results in significantly reduced joint pressure on the wrists, elbows and shoulders.

1. Stand with your feet shoulder-width apart.

2. Bend your knees and place both palms on the ground right in front of your feet.

3. Walk your hands outward, one at a time until you are in the "up" phase of a pushup.

4. Walk your hands back toward your feet one at a time. Stand back up.

The Modified Burpee is a fantastic example of an exercise that doesn't have to be performed quickly to be effective.

In some ways, this version is more difficult than the traditional burpee because of the increased time under contraction required by the arms, chest and shoulders. It is also easier for people of all fitness levels to perform, as the reduced speed creates a more manageable heart rate response. So, let's get to work!

Matt Parrott has a doctorate in education (sport studies) and a master's in kinesiology and is certified by the American College of Sports Medicine. He welcomes questions and fitness stories at