Biden lobbies both parties on infrastructure 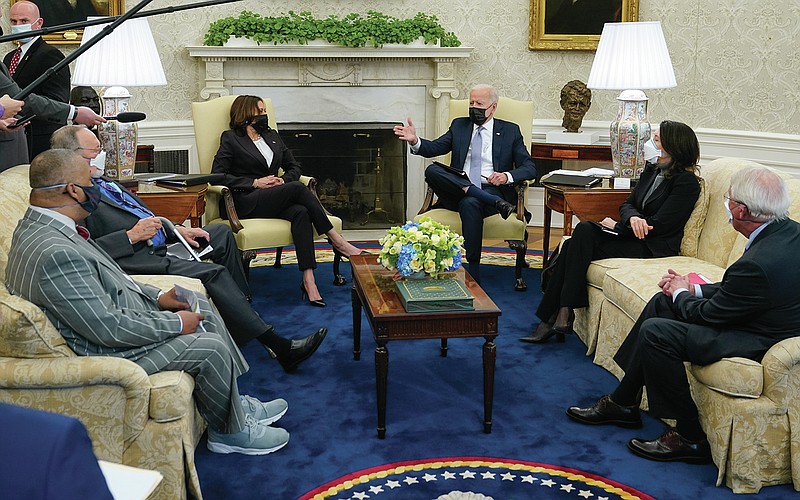 WASHINGTON -- President Joe Biden met with centrist Democrats and Republicans on Monday as he embarks on a new sales pitch in an effort to shore up bipartisan support for his $2.3 trillion proposal to upgrade the nation's infrastructure.

The White House meeting came as congressional lawmakers return to Washington this week after a brief spring recess. Many members of Congress support new infrastructure spending, but they are at odds over the size and scope of Biden's plan -- creating partisan divisions that threaten to spoil early hopes for a swift compromise on a signature element of the president's economic agenda.

Biden attempted to assure the bipartisan group of lawmakers that the Oval Office gathering was not "window dressing." One of the core disputes is over what counts as infrastructure in his proposal.

"I'm prepared to negotiate as to the extent of my infrastructure project, as well as how we pay for it," Biden said. "It's going to get down to what we call 'infrastructure.'"

Sen. Roger Wicker, R-Miss., indicated after the meeting that he was willing to negotiate with Biden and called it a "good discussion." But a more fundamental disagreement also emerged about whether the United States is losing its status atop the global economy because of its deteriorating infrastructure.

"He says that we're a declining superpower, the United States is no longer number one," Wicker said afterward. "I just fundamentally disagree with that. But he says that our allies and our adversaries tell us that."

Among the other Republicans at the meeting were Sen. Deb Fischer of Nebraska and Reps. Garret Graves of Louisiana and Don Young of Alaska. Democrats attending were Sens. Maria Cantwell of Washington and Alex Padilla of California and Reps. Donald Payne Jr. of New Jersey and David Price of North Carolina.

[Video not showing up above? Click here to watch » https://www.youtube.com/watch?v=nM01mF1X5No]

Cantwell said Biden will seek to drive a consensus by having his team revisit the lawmakers who assembled at the White House and meet with their colleagues.

"The president said he would send his team up to the Hill to talk to anybody about how to get this done," Cantwell said.

The White House gathering marks a period of intense outreach on the part of the Biden administration, which deputized Cabinet leaders including Transportation Secretary Pete Buttigieg earlier this month to sell the package known as the American Jobs Plan to congressional lawmakers and local officials nationwide.

The president has insisted the White House intends to be bipartisan, and he hopes to adopt a law with GOP support, given the broad political appeal in addressing the country's infrastructure needs. But the administration has signaled it does not have tolerance for endless negotiations, opening the door for Democrats to act on their own, much as they did with the $1.9 trillion coronavirus relief package they secured in March.

With infrastructure, the pathways to passage grew increasingly complicated last week. Republican lawmakers blasted Biden's proposal for its scope, arguing that programs to tackle climate change and social issues including child care did not belong in an infrastructure package. Party leaders also took great issue with its $2.3 trillion price tag and the accompanying tax increases Biden has put forward to pay for it, prompting Senate Minority Leader Mitch McConnell, R-Ky., to say that Republicans are disinclined to support it in its current form.

Republicans say just a fraction of the spending goes to traditional infrastructure, as $400 billion would expand Medicaid support for caregivers and substantial portions would fund electric vehicle charging stations and address the racial injustice of highways that were built in ways that destroyed Black neighborhoods.

"This plan would impose the biggest tax hikes in a generation when workers need an economic recovery. It would gut right-to-work protections for blue-collar workers," McConnell said in a Monday floor speech. "It would throw hundreds of billions at the far-left's green fads."

Some Democrats, including key centrist Sen. Joe Manchin of West Virginia, raised their own objections to the tax increases, which would raise the corporate rate to 28% from 21%. But Manchin also sounded a key warning for the administration last week: He urged Democrats not to rely on an arcane legislative maneuver known as reconciliation to advance infrastructure reform with only 51 votes.

The Senate, divided evenly between the two parties, poses the biggest political and procedural constraints for what will be included in the final version.

An early test for wooing Republicans will come in the Senate Environment and Public Works Committee, where Chairman Tom Carper, D-Del., plans to produce a surface transportation bill by the end of May. One tool to win GOP support will be the earmarking process to designate funds for specific projects, in which Republicans said they would participate.

In the Senate Finance Committee, Chairman Ron Wyden, D-Ore., has floated his own proposal to overhaul the U.S. international tax system, which largely repeals the GOP's 2017 global tax makeover, imposes a 21% global minimum tax and introduces other measures to discourage profit shifting outside the U.S.

House committees will also be working this month on legislation to fulfill Biden's proposal, which Pelosi said her chamber could pass before the July 4 recess and the Senate could send to Biden's desk by August.

How the House legislation is packaged will be the subject of intense caucus debate, and opposition from just a handful of Democrats could sink the measure if all Republicans vote against it.

Progressives are pushing for one massive bill that will include the jobs and infrastructure measures, as well as the family and health provisions. Some have called for spending as much as $10 trillion just on climate change initiatives.

There is also disagreement in the House over the plan's tax provisions, which would fall under the purview of the Ways and Means Committee. Democrats from high-tax states like Rep. Josh Gottheimer of New Jersey are threatening to vote against any package that doesn't repeal the $10,000 cap on state and local tax deductions enacted in the 2017 tax law.

Rep. Liz Cheney, R-Wyo., the No. 3 Republican in the House, said Sunday that Biden's proposal should be "fundamentally redone" to "actually focus on infrastructure."

Only 6% of the plan addresses projects traditionally deemed infrastructure, like roads and bridges, Cheney said on CBS, picking up on a current GOP talking point. Democrats say the meaning of infrastructure needs a 21st-century reboot. Cheney also said she was concerned about stoking inflation.

Monday's meeting came as the White House released state-by-state breakdowns that show the dire shape of roads, bridges, the power grid and housing affordability, among other issues. Biden's team is making a direct argument for lawmakers to put their constituents ahead of their ideologies. An appeal to the broader public is unlikely to resonate much with Republican lawmakers who have already blasted the plan.

The figures in the state summaries paint a decidedly bleak outlook for the world's largest economy after years of repairs being deferred and delayed. They suggest that too much infrastructure is unsafe for vehicles at any speed, while highlighting the costs of extreme weather events that have become more frequent with climate change as well as dead spots for broadband and a dearth of child-care options.

Drawn from an array of private and public data, the state reports show there are 7,300 miles of highway in Michigan alone that are in poor condition. Damaged streets in North Carolina impose an average yearly cost of $500 on motorists. Iowa has 4,571 bridges in need of repair. There is a roughly 4-in-10 chance that a public transit vehicle in Indiana might be ready for the scrap yard. Pennsylvania's schools are short $1.4 billion for maintenance and upgrades.

Most states received a letter grade on their infrastructure. West Virginia earned a D. So did Biden's home state of Delaware. Of the states rated, the highest grades went to Georgia and Utah, which each notched a C-plus. The lowest grade, D-minus, went to the territory of Puerto Rico.

The administration is banking that the data will confirm the everyday experiences of Americans as they bump over potholes, get trapped in traffic jams and wait for buses that almost never correspond to published schedules. There is already a receptive audience to the sales pitch, and the strategy is that public support can overcome any congressional misgivings.

"We don't have a lot of work to do to persuade the American people that U.S. infrastructure needs major improvement," Buttigieg said on Fox News Channel's "Fox News Sunday" ahead of the reports' release. "The American people already know it."

Information for this article was contributed by Josh Boak, Lisa Mascaro and Kevin Freking of The Associated Press; by Tony Romm and Jeff Stein of The Washington Post; and by Erik Wasson and Laura Davison of Bloomberg News (WPNS).