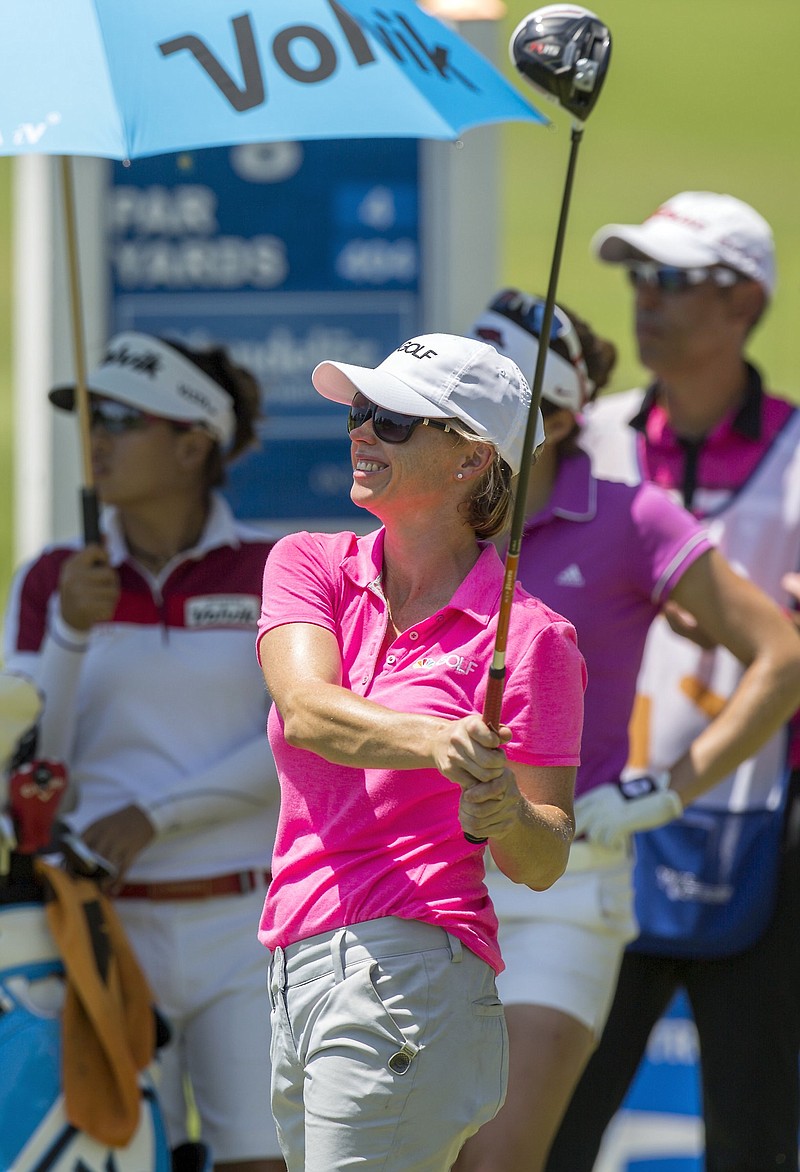 Lisa Cornwell has been a trailblazer since her early days in Fayetteville.

Cornwell, 46, already was accomplished on the links as a pre-teen before winning the first of four Arkansas Women's Golf Association championships at 14 years old to become the youngest women's state champion. Also an all-state basketball player, Cornwell later became the first female scholarship golfer for the inaugural women's program at the University of Arkansas.

Fast forward to 2021, and Cornwell is set for induction Friday night into the Arkansas Sports Hall of Fame at the Statehouse Convention Center in Little Rock, but she is also in the midst of one of her greatest challenges: Wrangling with former employer Golf Channel over a complaint she filed last year alleging discrimination and retaliation at the network.

Cornwell's strength in the fight is clear, starting Jan. 1 when she tweeted about not having a contract with Golf Channel for the first day in seven years and being free to speak up. Concluding the tweet with, "the days of it being swept under the rug are over," Cornwell appeared on a No Laying Up podcast a few days later to discuss not only the mistreatment she experienced, but the misconduct she witnessed during her seven years at the network.

"Obviously, I feel very passionate about this," Cornwell said. "I cared about my job. I worked hard at my job, and I got the respect out in the field. Unfortunately, I didn't get the respect from my managers and executives. It was a battle. It was one I wasn't willing to ignore."

Cornwell has rarely felt out of her element. Since Fayetteville did not have a girls golf program, Cornwell played on the boys varsity team. She won over 30 times on the junior circuit and became the second-ranked player in the country by the American Junior Golf Association. Cornwell also was named the Arkansas Female Athlete of the Year during her senior year.

It was in her adolescence when Cornwell befriended well-renowned state golf professional Dan Snider, who at the time was at Chenal Country Club in Little Rock. The two forged a bond on the golf course, which grew quickly into a friendship off the course that remains today.

"If I remember correctly, the first time I saw her she came down to Chenal to play in one of the state girls events and obviously impressed me with how good she was," Snider said. "I just loved her personality. We just hit it off.

"Very athletic swing, and she hit really good shots, not just for a young female golfer of her age, but for anyone of her age. She knew how to play the game at an early age."

Cornwell was inducted into the Arkansas State Golf Association Hall of Fame in 2019. In her acceptance speech that October night at Chenal, Cornwell thanked many, but the student didn't hold back doting on her former teacher. She said she can call Snider today with something, and he would do anything to help.

"Dan's been a mentor, a father figure, a good friend, anything that you can imagine," Cornwell said. "Once he takes you under his wing like he did for me and so many young players in Arkansas, he never lets you go.

"I think that's the thing that means so much. He helped me out in ways that I didn't even realize until I got older and looked back and thought about it that he really had a big impact on not just my golf, but more importantly on my life, and I will forever be grateful to him for that friendship."

Snider remembered the impression left on him by Cornwell's induction speech.

"It just meant a lot to me. It was about our relationship more than it was about golf."

After graduating high school in 1992, Cornwell attended SMU before transferring to Tulsa. As a senior, she received the first golf scholarship for the inaugural University of Arkansas women's program. Though she didn't have professional aspirations such as former Razorback standouts Stacy Lewis, Gaby Lopez and Maria Fassi, Cornwell's success off the course has served her well as an ambassador to Coach Shauna Taylor's program.

"[Shauna] called me earlier this year," Cornwell said. "The women's team was playing in Orlando, and I made sure to go out there the last day. She was just appreciative for the players to see the support out there from somebody who not only did it before them, but is in the business that I am in now. Just to let them know that the connection will always be there. I know for Shauna that family feel is really important to her, and I think that is a big part of her success because she understands it so well.

"Why wouldn't you want to go to a program where Stacy Lewis won a national title? They're watching Maria Fassi and Gaby Lopez win out there. We don't have the rich history of Arizona State or Duke or USC or all of those programs when I was coming up that were the powerhouse programs and many of which still are. Shauna has elevated Arkansas women's golf to where it is today."

Cornwell built a successful TV broadcasting career after graduating from UA. Her on-air career led her to three different states at affiliates for ABC, CBS and NBC. She then served as a studio host, reporter and did play-by-play for the Big Ten Network before landing the role as an anchor for Golf Channel's "Golf Central" in 2014.

During her seven years at Golf Channel, she also reported live at PGA, LPGA and PGA Tour Champions tournaments, was host for the NCAA Championships and had roles in instructional shows for the Golf Channel Academy.

"I think hopefully the way that I conducted my job even when things got pretty volatile, that the one thing that always mattered the most to me [was] the people knew I knew the game of golf," Cornwell said. "That they knew I was a professional out there when I did my business and that I cared about them. Those are the things I will forever have with me and those relationships you make that you never thought you would make.

"Shortly after my departure and I announced it, one of the first people who called me was Nancy Lopez. I mean Nancy was my hero growing up. Now I have a friendship with her."

Cornwell said her cousin and 42nd President Bill Clinton steadily kept up with her during the early stages of the pandemic and more recently with the Golf Channel saga.

"It's funny, I can tell that he was bored during the pandemic because he probably texted me as much as my mom did," Cornwell said. "I don't hear from him as much now. We might text once every week or two, but I know he has been fully vaccinated and he's out and about.

"He's been worried about me during this whole thing with Golf Channel. He checks in. He'll call me every now and then wanting an update, trying to encourage me and give me support. He's probably one of the busiest people in the world even still to this day and just takes time to check in and touch base.

"He sent me a really nice note when he read about the Hall of Fame induction. He's sent me a lot of great things over the years, but it was probably one of the most touching things he's ever said. I can't tell you what he means to me."

Cornwell partnered recently with Progressive Golf Management as an independent contractor. With Progressive, Cornwell is working on a book "to get my story out there," developing a talk show or a featured-base "60 Minutes" type of show and is doing speaking engagements.

"We'll be going to where the story is," she said. "I'll never be too far away from getting in the action of sports in some way, shape or form."

Lisa Cornwell at a glance

NOTEWORTHY In 1992, was named the Arkansas Female Athlete of the Year. … Reported for NBC, CBS and ABC TV affiliates in Mississippi, Tennessee and Ohio. … Also worked for the Big Ten Network. … Anchor for seven years on Golf Channel’s “Golf Central”. … Inducted into the Arkansas State Golf Association Hall of Fame in 2019. … Is a cousin to 42nd President Bill Clinton.