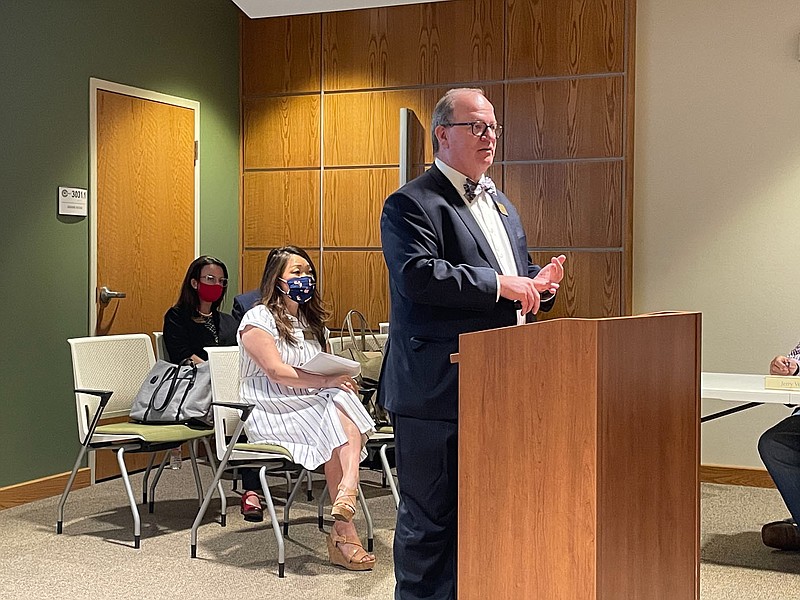 NWA Democrat-Gazette/DAVE PEROZEK Mark Wallenmeyer, dean of health professions at Northwest Arkansas Community College, addresses the college's board on Monday, April 12, 2021. Wallenmeyer provided an update on the covid-19 vaccination events that college staff and health professions students have participated in this year. He estimated faculty members and students have administered 22,500 vaccine doses.

BENTONVILLE -- Northwest Arkansas Community College is rolling forward with its plan for a bicycle technician program scheduled to begin this fall.

The Board of Trustees on Monday approved three additional staff positions needed for the program, which college officials believe is needed to meet employment demands of a growing industry.

The grant will provide salaries for three years for the new positions: a program director, project coordinator and outreach coordinator. The college is now accepting applications for these positions.

Grant dollars also will go toward equipment and renovation of the portion of the physical plant building where the program will be based.

"I think it's going to be a great program," Jorgenson said. "We anticipate we'll have local enrollment just to support all of the various bicycle shops and cycling programs in the area, but we also anticipate we'll have people from the larger area, probably several states around, sending people to this particular training program."

The U.S. Bureau of Labor Statistics projects more than 1,000 bicycle repair jobs will be available over the next decade in Arkansas alone, said Megan Bolinder, dean of workforce and economic development. Nationally, the mean annual wage for bicycle repairers as of last year was $33,530, according to the bureau.

The program "will be a driver of economic development," Bolinder said.

The chairman of the Bicycle Industry Employers Association approached the college last fall about establishing the program, which will be the second of its kind in the nation, Bolinder said.

The association's goal is to "connect the needs of bicycle industry employers with regionally accredited colleges to develop smart, cost-effective programs for both schools and students," according to the association's website.

The one-year program will be "rigorous," Bolinder said. The Barnett Bicycle Institute, a trade school in Colorado Springs, Colo., will provide the curriculum, she said.

The college is capping program enrollment for the first year at 24 students. One person has enrolled so far, Bolinder said.

Students who complete the program will receive a technical certificate that qualifies them to be hired as a technician.

Northwest Arkansas has developed a reputation nationally as a region friendly to bicyclists. As an example of that, People for Bikes, a bike advocacy organization, last year named three Northwest Arkansas cities -- Rogers, Fayetteville and Bella Vista -- among its top 15 cities in the country for bikes.

Northwest Arkansas Community College’s enrollment for the fall 2020 semester was 7,411 students. They took a total of 58,849 credit hours.