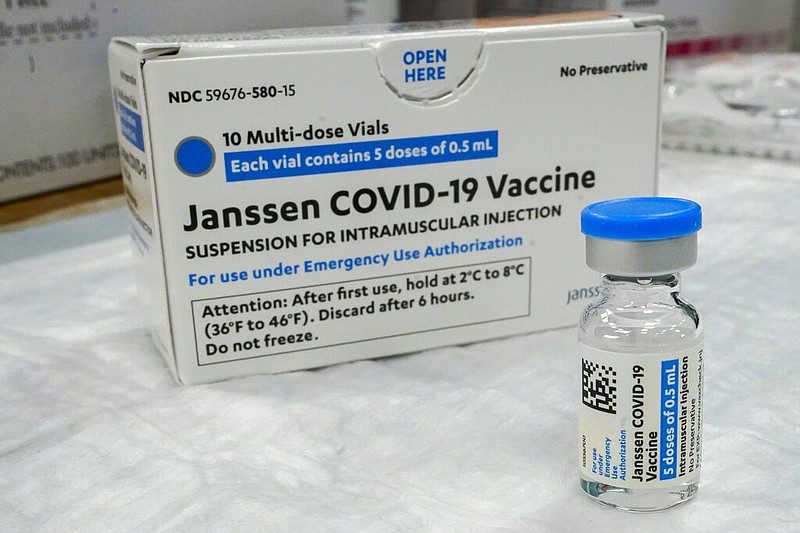 The Johnson & Johnson covid-19 vaccine sits on a table at a pop-up vaccinations site in the Albanian Islamic Cultural Center in the Staten Island borough of New York on Thursday, April 8, 2021. (AP/Mary Altaffer)

Johnson & Johnson's covid-19 vaccine will remain in limbo a while longer after U.S. health advisers told the government Wednesday that they need more evidence to decide whether a handful of unusual blood clots were linked to the shot -- and if so, how big the potential risk really is.

The reports are rare -- six cases out of more than 7 million U.S. inoculations with the one-dose vaccine. But the government recommended a pause in Johnson & Johnson vaccinations this week, not long after European regulators declared that such clots are a rare but possible risk with the AstraZeneca vaccine, a shot made in a similar way but not yet approved for use in the U.S.

At an emergency meeting, advisers to the Centers for Disease Control and Prevention wrestled with the fact that the U.S. has enough vaccine alternatives to do without the Johnson & Johnson vaccine for a time, but other countries anxiously awaiting the one-and-done shot may not.

One committee member, Dr. Grace Lee, was among those who advocated tabling a vote. She echoed concerns about getting more data to better understand the size of the risk and whether it was greater for any particular group of people.

"I continue to feel like we're in a race against time and the variants, but we need to [move forward] in the safest possible way," said Lee of Stanford University.

The clots under investigation are highly unusual. They occurred in strange places, in veins that drain blood from the brain, and in people with abnormally low levels of clot-forming platelets. The six cases raised an alarm bell because that number is at least three times more than experts would have expected to see even of more typical brain-drainage clots, said the CDC's Dr. Tom Shimabukuro.

"What we have here is a picture of clots forming in large vessels where we have low platelets," Shimabukuro explained. "This usually doesn't happen," but it's similar to European reports with the AstraZeneca vaccine.

The clot concerns could undermine public confidence in a vaccine many hoped would help some of the hardest-to-reach populations -- in poor countries or in places like homeless shelters in the U.S.

"We know we are fighting a war against covid-19," Dr. Peter Marks, the Food and Drug Administration's vaccine chief, said Tuesday. But when it comes to side effects, "we don't, in the United States, have a lot of tolerance for friendly fire."

In a company presentation, Aran Maree, chief medical officer for Janssen, the division of Johnson & Johnson that developed the vaccine, presented data on two cases of clots in people who received vaccine in the clinical trial, one of whom was a 25-year-old man with a hallmark of the symptoms.

[Video not showing up above? Click here to watch » https://www.youtube.com/watch?v=8JeDwEoSPDk]

"I'd like to reiterate that, based on the current data, Johnson & Johnson believes the overall benefit risk profile for a vaccine is positive across the population for which it is authorized," Maree said.

It's not clear what action the advisory committee will take. It could vote to continue the overall hold for a few weeks, or pause use for certain age groups or people.

Health officials recommended the Johnson & Johnson timeout in part to make sure doctors know how to recognize and treat the unusual condition. On Wednesday, the CDC said four of the six women with the unusual clots were treated with a blood thinner named heparin -- a treatment the government is warning doctors to avoid.

The U.S. set up intensive systems to track the safety of covid-19 vaccines, knowing that side effects too rare to have occurred in studies of thousands of people could pop up once millions rolled up their sleeves. Shimabukuro said spotting such a rare potential risk amid the nation's huge vaccine rollout "is an example of a success story for vaccine safety."

The setback for Johnson & Johnson occurs as the worldwide death toll from covid-19 approaches 3 million, including more than 560,000 who perished in the U.S., which continues to report tens of thousands of new infections every day and an average of almost 1,000 deaths.

So far, the Johnson & Johnson vaccine has been a minor player in U.S. vaccinations. More than 122 million Americans have received at least one vaccine dose, the vast majority with shots made by Moderna or Pfizer, and nearly 23% are fully vaccinated.

Both companies are on track to have delivered 300 million doses each by mid- to late July -- and federal health authorities stress that there are no signs of the unusual clots with the Moderna and Pfizer vaccines.

Vaccinations are slower in Europe, where many countries have struggled for supply. Johnson & Johnson delayed some of its European deliveries amid the clot evaluation.

When clots were spotted after AstraZeneca vaccinations, scientists in Norway and Germany raised the possibility that some people are experiencing an abnormal immune response, forming antibodies that disable their platelets. That's the theory as the U.S. now investigates the Johnson & Johnson reports.

Health officials caution against confusing the normal flu-like symptoms that occur a day or two after many covid-19 vaccination with the clot concern. The problematic clot symptoms, such as severe headache or severe abdominal pain, have occurred about a week to three weeks after the Johnson & Johnson shot.

Tuesday's decision to pause the use of the Johnson & Johnson vaccine is hitting underserved communities because the single-shot option is favored for transient and hard-to-reach populations.

That includes students, rural residents and people involved in shift work, throwing a new hurdle in front of the Biden administration's efforts to introduce greater equity into the nation's vaccination campaign. The places best able to address the change were those with abundant vaccine supply, newly underscoring the uneven nature of the rollout.

A clinic serving migrant farmworkers in Immokalee, an unincorporated community of about 25,000 on the edge of Florida's Everglades, said it would continue its efforts using other vaccines on hand. "We still have doses of the Moderna vaccine for distribution by appointment at our vaccination clinics and remain committed to our vaccination efforts, especially in underserved populations in our community," clinic leaders wrote on Facebook.

But offering an alternative product was made more difficult in other places by the scheduling and storage requirements of Moderna and Pfizer's two-dose protocols. In addition to requiring just one shot, Johnson & Johnson's product can be kept at normal refrigeration temperatures for three months, making it easier to handle.

Appointments were canceled in some of the states buffeted by mounting daily cases, including Michigan. Among the abandoned clinics were several planned by the University of Michigan at locations in Flint, Dearborn and Ann Arbor. Democratic Gov. Gretchen Whitmer, in her appeals to the White House for additional shots, has specifically asked for more doses of the Johnson & Johnson vaccine.

Mobile clinics in six northwest Ohio counties were canceled this week and next, threatening the goal set forth by Ohio Northern University to reach six rural counties in 60 days. "We have paused scheduling any further appointments at any clinic," said Steven Martin, the school's pharmacy dean.

In Chicago, a program to reach homebound senior citizens was also on hold, said Allison Arwady, the city's public health commissioner. So, too, was a planned event with the Illinois Restaurant Association to bring shots to food service workers. The city was examining the possibility of using a different vaccine at Chicago State University, the largest vaccination site on the city's far South Side, but that would depend on sufficient supply.

"We don't have vaccines sitting on shelves," Arwady said. "We push it all out."

No such pressure affected planning in Tennessee, where the Department of Health issued a statement noting, "Our vaccine supply continues to surpass demand and we do not anticipate this shift will impact our efforts to vaccinate as many Tennesseans as possible."

Elsewhere, the impact on newly announced initiatives was immediate. Use of the Johnson & Johnson vaccine was halted at 34 State University of New York campuses, including Suffolk County Community College, where Democratic Gov. Andrew Cuomo had appeared Monday to tout the initial allocation of 21,000 vaccines for students in the system. Jim Malatras, the chancellor of the school system, said Tuesday that he was working with the state to find alternative vaccines.

The impact was also felt in New York City, which had been administering as many as 4,000 doses of the Johnson & Johnson vaccine each day, said Mark Levine, a City Council member. But the consequences exceeded the pace of inoculations, he observed on Twitter.

"J&J has allowed us to reach marginalized NYers -- homebound, NY's experiencing homelessness, folks being discharged from hospitals, incarcerated NYers," he wrote. "Imperative that we fill this equity gap."

"I'm on the fence about whether the pause was the best bet given vaccine hesitancy," Bosse said. "I think we want to demonstrate that we're taking safety very seriously, and in that way, a pause is positive because it shows the data is being watched very closely. At the same time, it's a very, very small number. And so I'm hopeful that in the review, they're able to comfortably resume Johnson & Johnson."

Information for this article was contributed by Lauran Neergaard and Mike Stobbe of The Associated Press; and by Lena H. Sun, Carolyn Y. Johnson and Isaac Stanley-Becker of The Washington Post. 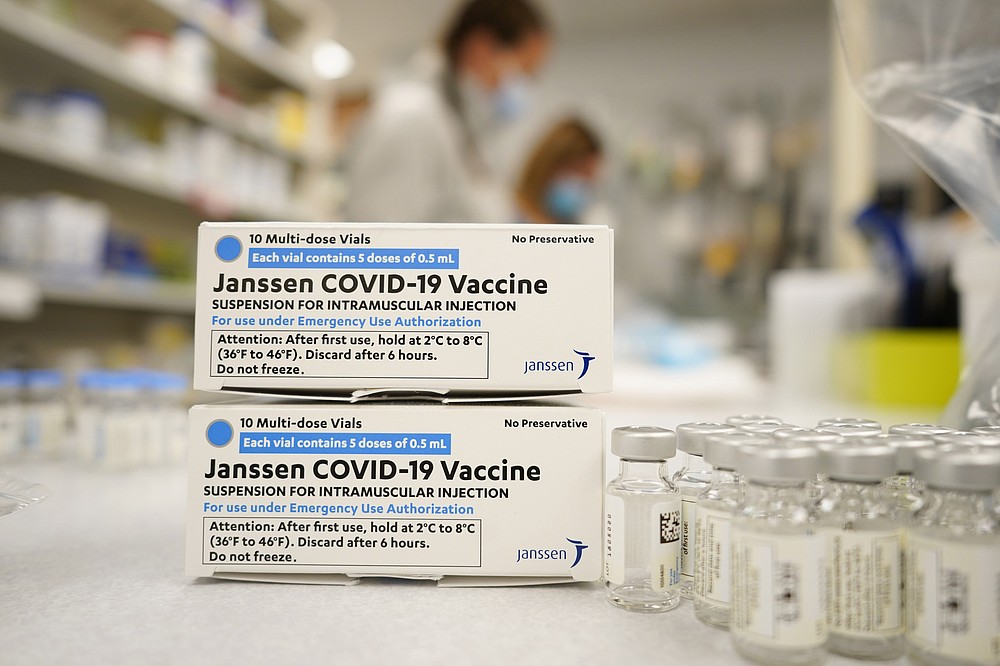 FILE - In this March 6, 2021, file photo, boxes stand next vials of Johnson & Johnson COVID-19 vaccine in the pharmacy of National Jewish Hospital for distribution in Denver. U.S. health officials are weighing next steps as they investigate unusual blood clots in a small number of people given the vaccine -- a one-dose shot that many countries hoped would help speed protection against the pandemic. (AP Photo/David Zalubowski, File)
ADVERTISEMENT